As a Backroads trip leader, I often get asked what is my favorite city in the world. Many of my peers answer, "Oh, that's tough..." For me, it's not tough at all. It is, without a doubt, Barcelona.

When you think of Barcelona, particularly her glorious architecture, one name probably comes to mind: Gaudí . If ever there was a city whose look and feel was determined by one person's stylistic influence, it's Barcelona. From the famed La Sagrada Familia to Gaudí's apartment, Gaudí is everywhere. His influence absolutely dominates the city.

Gaudí was a Catalan architect who lived from 1852-1926. His work was largely inspired by nature, and this shows through in a lot of the work you see and experience in Barcelona. 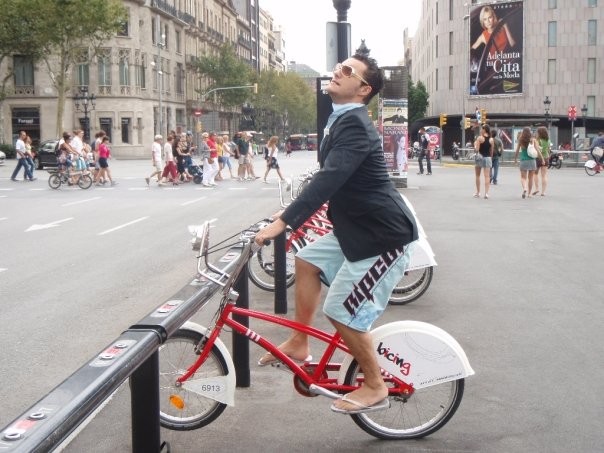 Got a Bicing bike?

Let us take a Bicing tour together around Barcelona. Bicing is the local city bike rental system. I'm always a massive advocate for biking; it's the best way to see a city, and in Barcelona this system has made biking so readily available that you'd be nuts (in my humble opinion) to explore any other way!

Okay, first step: rent a Bicing bike from La Ramblas, the main thoroughfare. Now check your map. La Sagrada Familia is four kilometers away. Let's go! We're on some narrow streets for this part of the ride, so be careful! Okay, here's a Bicing station just outside La Sagrada Familia. Let's dock our bikes.

I would say that the "must-see" of Gaudí's works is La Sagrada Familia—though it should probably be called "La Unfinished-a" since it's been under construction since 1882 and has an expected completion date of 2026. (When I first visited in 2005, FYI, the projected finish date was 2015.) After Gaudí's death, his apprentice took over the work, and from then on the project has been passed down to whoever is considered the most worthy candidate at the time. They do say art is never finished. La Sagrada Familia is the epitome of this! 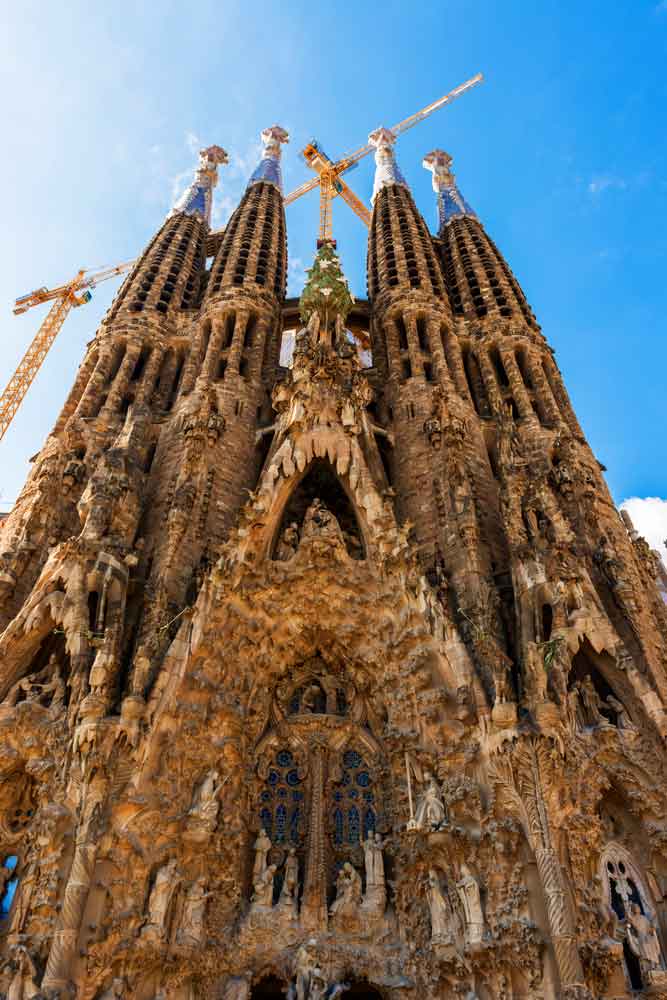 The Spires of La Sagrada Familia

From blocks away you can already see the eight spires and a few construction cranes rising above the neighborhood skyline. Exterior pillars rest on concrete tortoises and biblical reckoning scenes keep you intrigued for hours. Inside, you'll be stunned, too. Columns are shaped like tree trunks with branches. Magnificent mosaics and stained glass windows abound.

Okay, moving on! Grab your bike; our next stop is Casa Milà (or La Pradera, as it's better known). From the moment you first lay eyes on this most unique of apartment blocks, you'll rub your eyes. The undulating walls and windows of the apartment are hard to comprehend and you may well think you've gotten heat stroke from biking in Barcelona's legendary summer heat. Originally built over seven years in the early 1900s for a well-known Barcelonan family, the Milas, the building rests on plenty of pillars and arches. These, as well as the use of steel, allowed Gaudí to create what seems like a chaotic floor plan. Even the heights of all the pillars and ceilings differ from one another. Gaudí 's brilliance really shines through here. Literally. For in order to allow light into all the rooms, the apartments are arranged around two central courtyards, one circular and the other oval-shaped, to coax natural light into each apartment. It blows my mind to think of what Gaudí came up with! It seems like he had the mindset that there would be no straight lines in the building. The end result can only be appreciated on an up-close and personal visit.

Okay, time for lunch! Let's head down to Las Ramblas and get some tapas and a cheeky glass of wine... maybe two. After lunch, how about a little hiking? It's two and a half miles to our next stop, Parc Güell, so grab a bottle of water and let's go! We'll climb a rolling hill on our way up, but the views are worth it! At the park entrance, we'll be greeted by "El Drac" (The Dragon), Gaudí's famous mosaic salamander and a popular symbol in the city. 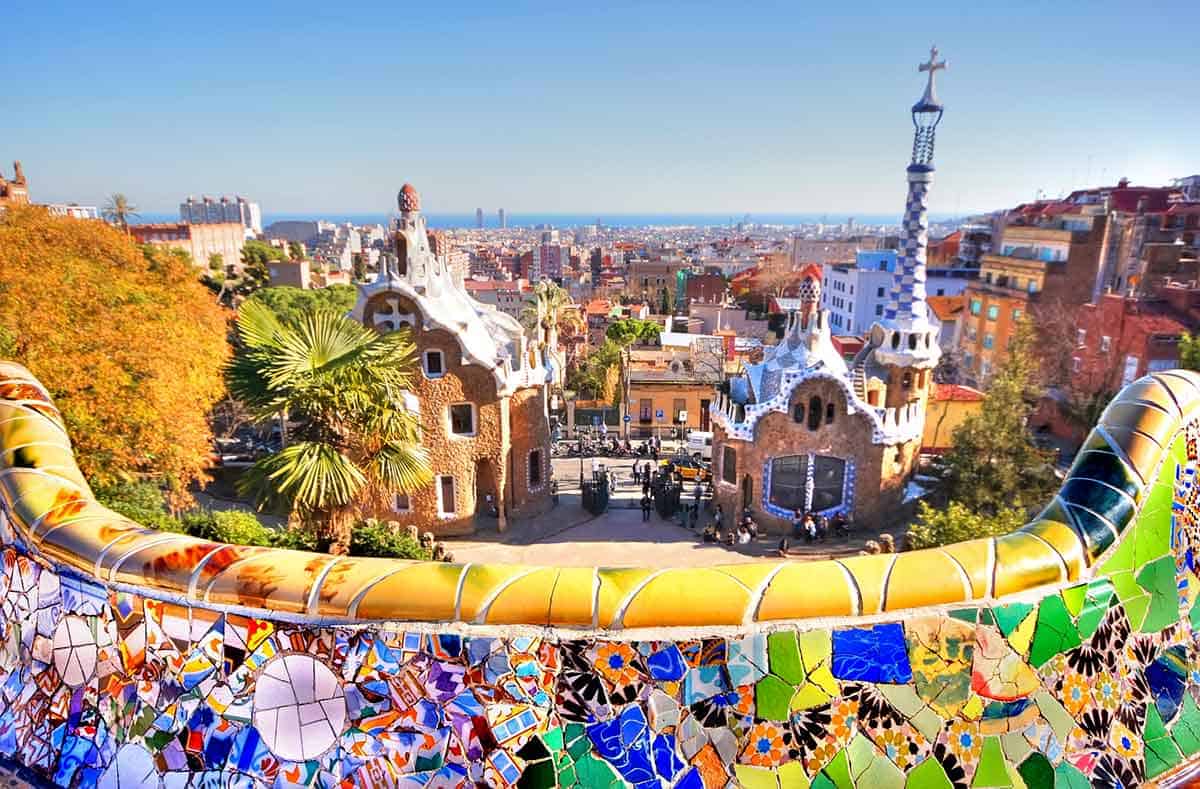 Just past El Drac are 17 hectares of sprawling park speckled with Gaudí's art. Park Güell is probably the best and most famous example of art nouveau landscape architecture in the world. Gaudí's passion for mosaic is on display in Parc Güell. See it in the Serpentine Bench, adorned with spectacularly colored tiles. Relax here if you like; the seat is unusually comfortable for a stone bench—During construction, Gaudí had a man drop his pants and sit in the soft plaster to set the correct curve. What a guy!

There is a sense of play in the entire park that is quintessentially Gaudí. Inside the park is La Torre Rosa, Gaudí 's own house, and inside the house you'll find furniture he designed, too, along with some drawings and other personal artifacts. It will take some time to wander through all Parc Güell has to offer, but I cannot imagine a better way to spend an afternoon in Barcelona.

Once you've had your fill of the park, start making your way back to town for a siesta. When you wake up in late afternoon from dreams inspired by today's experiences, I'll bet you'll want more Gaudí. Not to worry. There's much more to discover. But for now, it's time to head out for dinner and dancing on Las Ramblas, which at night is gorgeous and golden. As we walk through architecture illuminated for the nighttime, appreciate her in all her glory: Gaudí 's Barcelona.

Awesome article Chris....having only used Barcelona as a stopping off point for other trips I'm now putting it and bicing on my list of things to-do ;)
You absolutely should Christina! It's an amazing place!
TAKE IT, TAKE IT!!!!!!!!!!!!!
Take it! I am sure you can agree with me about this glorious place Mr Gorman!
oh for sure chris, prob my fav city in europe at least . non stop fun and adventure
Great article! i haven't been lucky enough to visit Barcelona (yet) but now I feel like I MUST! Thank you!
Do visit it Natasha, it's a brilliant place!
Great article Chris! Very well written. I felt excited reading it, and I could swear that I was right there with you. Looking forward to many more articles!
Glad It could take you somewhere else Ané! Mission accomplished!
Great article Chris! I think may next Backroads trip may just have to have Barcelona involved in it!
Cheers mate!
Brother! I spent a week in Barcelona and I loved every moment of it! Goudi's style blew me away. I hope to go on another Backroads trip with you soon!
Great article!
Thanks Zac!
I would love to take you and your Mom on another trip!
Perhaps in Spain?!
Amazing article. I am definitely adding Barcelona to my Must Vist in 2014!
Thanks Bridget! You definitely should, its an amazing place!
Well said! Barcelona is one of the best cities in Europe, cannot be missed and 1, 2 or even 3 days are not enough, but following Chris' tips you can have an amazing start of exploring Barca! Good job Chris!
Thank you Magda ;-)
We will be in Barcelona on June 20 after your Provence tour. Did you think we could take your bike tour ourselves (2 ladies) or should w do the tour below..
How much does it cost to rent one bike on your excursion?
Sounds so fun.

Hi Sheila--glad to hear you'll be on our Provence tour this summer! The day of cycling Chris did around Barcelona was self-guided and he rented a bike through the city's "bicing" bike-share system, which you need to purchase an annual membership for. There are many other places in Barcelona that rent bikes just for the day at reasonable prices. I encourage you and your travel partner to rent bikes and trace Chris's route through the city--what a great way to see the sights! If you'd rather go on an organized tour, many local bike rental companies offer those as well.
Have fun in Provence and Barcelona Sheila!
What a fabulous article, Chris. So great to see your smiling face again. I'm still talking about that Epic hike in the Canadian Rockies. Barcelona is also one of my favorite cities. My daughter did a junior year abroad program there back in '03 and I loved visiting her and seeing the many places you so beautifully & eloquently described. Both of us had a hard time leaving this lively, intoxicating and culturally rich city. Happy travels and hope our paths or our bikes
Stef! Great to hear from you!
That was a hike of epic proportions for sure.
It really is a great city. So rich in every sense of the word.
I hope to see you again xo
Last line of previous post should read, " Hope our paths or our bikes cross again!"
Cris, nice write up on Barcelona, Gaudi´s Works just lets ones mind just go wild and makes you wonder what was he thinking. Barcelona is my favorite city over Madrid any day.
Top