When people ask me about my cross-country biking adventure, they almost always ask, "Where was your favorite place to ride?" Perhaps it was because we were tired, sunburnt cyclists, worn out by the consistent headwinds and 105-degree heat of Kansas, but my answer is almost always Missouri. 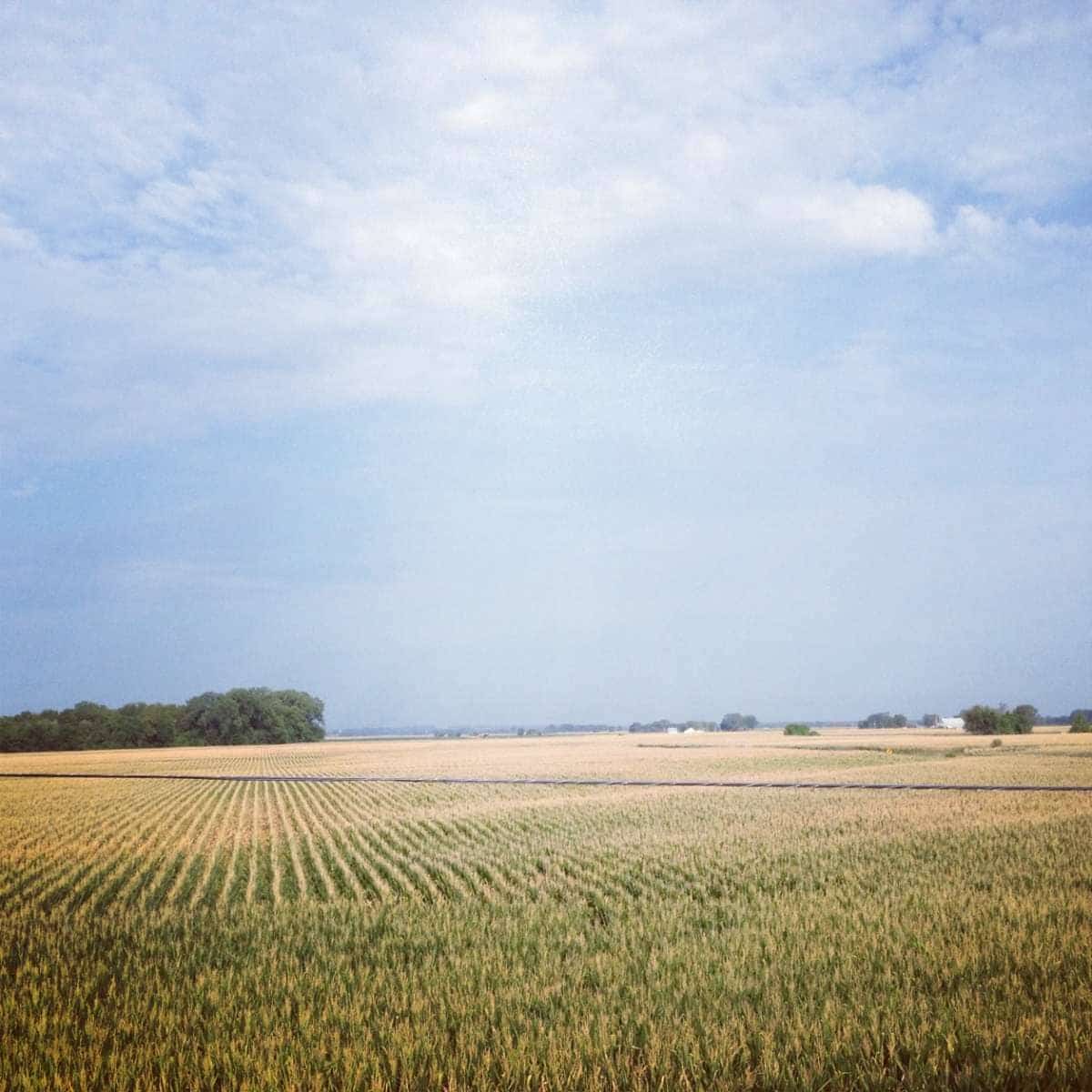 Kansas is full of corn--would Missouri be the same?

Yes. I said Missouri. Last summer, Backroads Camp Assistant Brant Haflich and I rode our bicycles across the country, from California to Washington, DC, and then up to Belfast, Maine. It was an education: both of us learning how beautiful and diverse our country is, making the idea of certain places real. I had never been to Missouri before and sort of expected a continuation of Kansas: beautiful golden fields of wheat and corn, bad food, intense heat, and just a bit more humidity. Every once in a while, we'd meet a cyclist going the opposite direction and we would warn him or her about the road ahead and they would do the same. With Missouri on our horizon we began to hear rumors of a trail stretching almost the entire width of the state--she was dusty, but she was flat and shady. And after the fifth touring cyclist told us about this trail, she began to seem like the Yellow Brick Road to Oz: a dream of a passage that's too good to be true. As you active travelers know, cycling without cars is an absolute dream, and a dream our dear Katy Trail was. The Katy Trail is America's longest rail trail, stretching 237 miles from Clinton to Machens, MO. A cyclist can ride off-road across almost the entire state. 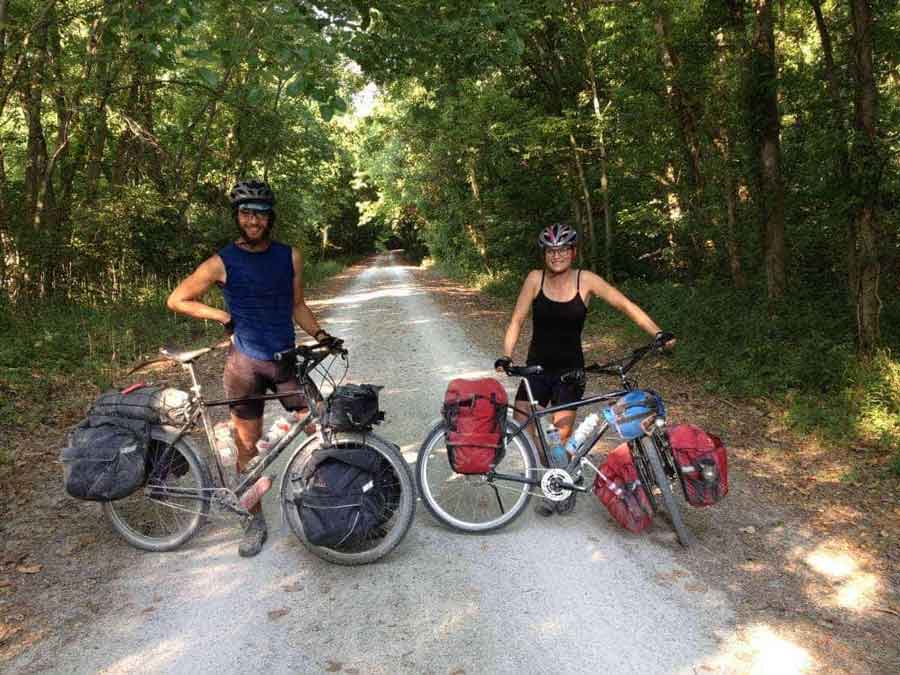 Brant and me on the shaded Katy Trail

The trail is largely shaded under a canopy of trees and winds itself along the great big Missouri River all the way to St. Louis. Every few miles or so, you pop out of a tunnel of trees into glowing acres of farmland and little townships that emanate small town Americana. These communities lost their economy years ago when the Missouri-Kansas-Texas rail line went under, so they haven't changed much. The trail now brings recreational tourists to their old-time general stores, candy shops and B&Bs. The cycling is awesome. You need slightly wider tires as the whole trail is on very hard-packed gravel; however, mountain bikes are not necessary. The trail is wide and flat and a perfect cycling spot for kids and adults who are looking to be able to have a conversation while they ride. 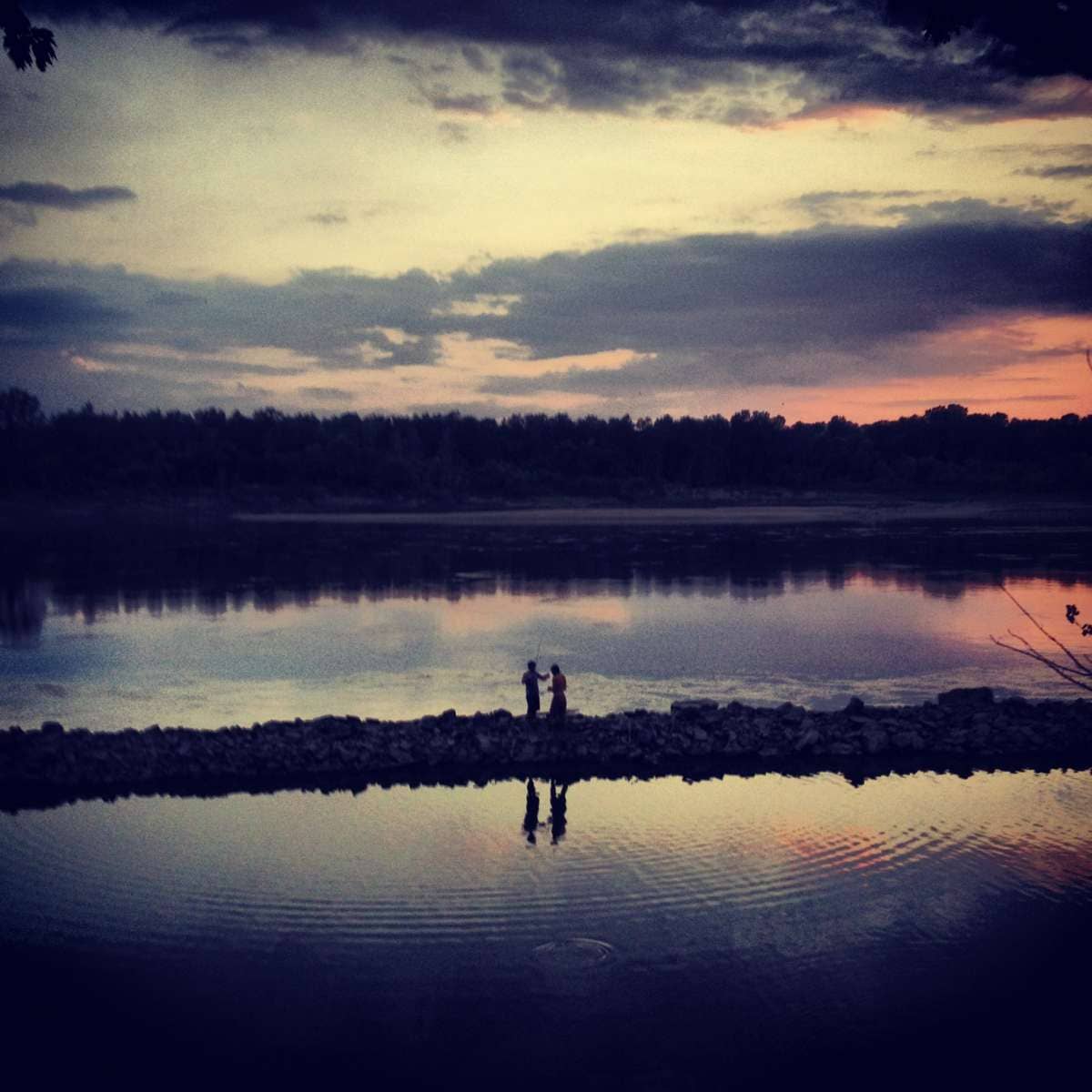 Fishing along the trail

Riding along the massive Missouri River made me feel like Huckleberry Finn: carrying all my belongings on my bicycle, Brant fishing in the sunset. The absence of modernity, from no cars to the unchanged towns, made the whole experience so relaxing. At night I wrote and read books on the bluff and imagined what this place felt like when Lewis and Clark passed through here. Half of the trail follows their journey and there are various historical landmarks marking their way. We camped along the trail at local campgrounds, but met many cyclists who rode the whole trail a bit lighter and slept at historical and boutique B&Bs along the way. The best treat was the Augusta Brewing Company and beer garden. Just off the trail in the little township of Augusta, this microbrewery serves up amazing IPAs and Pilsners alike. We were nearing the end of the trail and this was the perfect way to celebrate the experience and make our way to St. Louis. We left the trail just short of St. Charles in pursuit of the city. The Katy Trail website outlines how to map yourself to the city from the trail. Once we arrived in St. Charles, I found that Missouri again exceeded my expectations. First, we stopped for gourmet doughnuts and divine espresso in Clayton, MO, just outside the city at a hip café called Half & Half. Afterwards, we cycled through Forest Park, one of the largest urban green spaces in the US. The park was magnificent, full of museums and monuments, great fountains and people toting their blankets and cold drinks for a public outdoor movie. We spent the next few days exploring the city, visiting her farmers markets and the great Gateway Arch, and gawking at the fabulously old French architecture. Our favorite spot was City Museum in downtown St. Louis. There's really too much to say about this place and I recommend children and adults alike see it for themselves. One man fulfilled his dream of turning an old shoe factory into an unimaginable playground, with eight-story slides, suspended airplanes and a labyrinth of caves--it's a child's fantasy, a parents nightmare, and an absolute must-see. 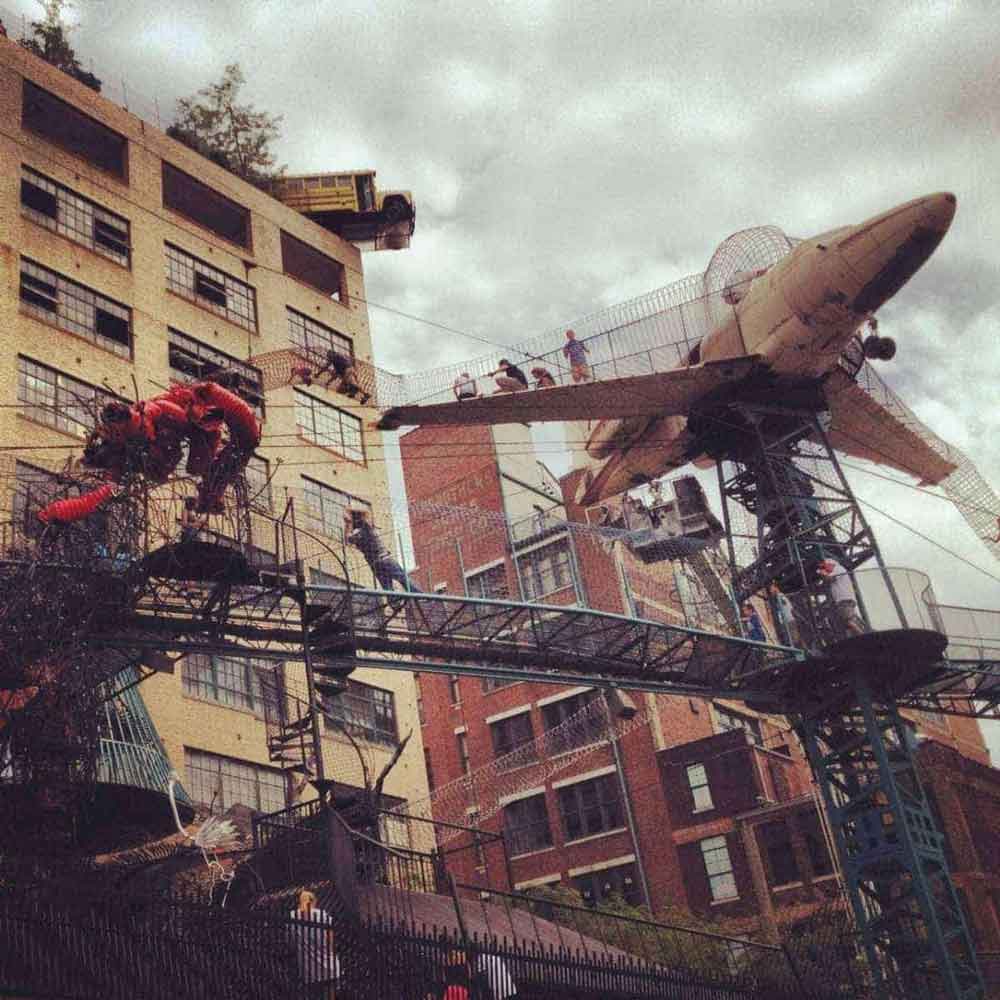 I've had a few guests on my Backroads trips from St. Louis and all of them love talking about their City Museum (even the parents), and all of them know how lucky they are to have access to the incredible Katy Trail. Once we begin talking about the Katy Trail, we start to imagine what it would be like if we turned all the unused rail lines into trails. We could almost bike across the whole of America, off-road! What a reality that would be ... The Katy Trail serves as an incredible example for so many communities who have old unused rail beds. Many people across America are fighting for their dormant rail beds to be turned into recreational paths, and the Rails-to-Trails Conservancy works at the forefront of this movement. The reuse of these beds is only logical. A rail bed is already a quality trail, as so much work and engineering went into creating stable and safe passages for loaded trains. By turning our unused beds into trails, it seems to honor the hard work that was put in so many years ago, while also promoting healthy and thriving communities. After riding the Katy Trail, we spent the rest of our trip trying to map our route from rail trail to rail trail. Although nothing was quite as extensive or organized as Miss Katy, I fell in love with riding in the shade of our rail history. 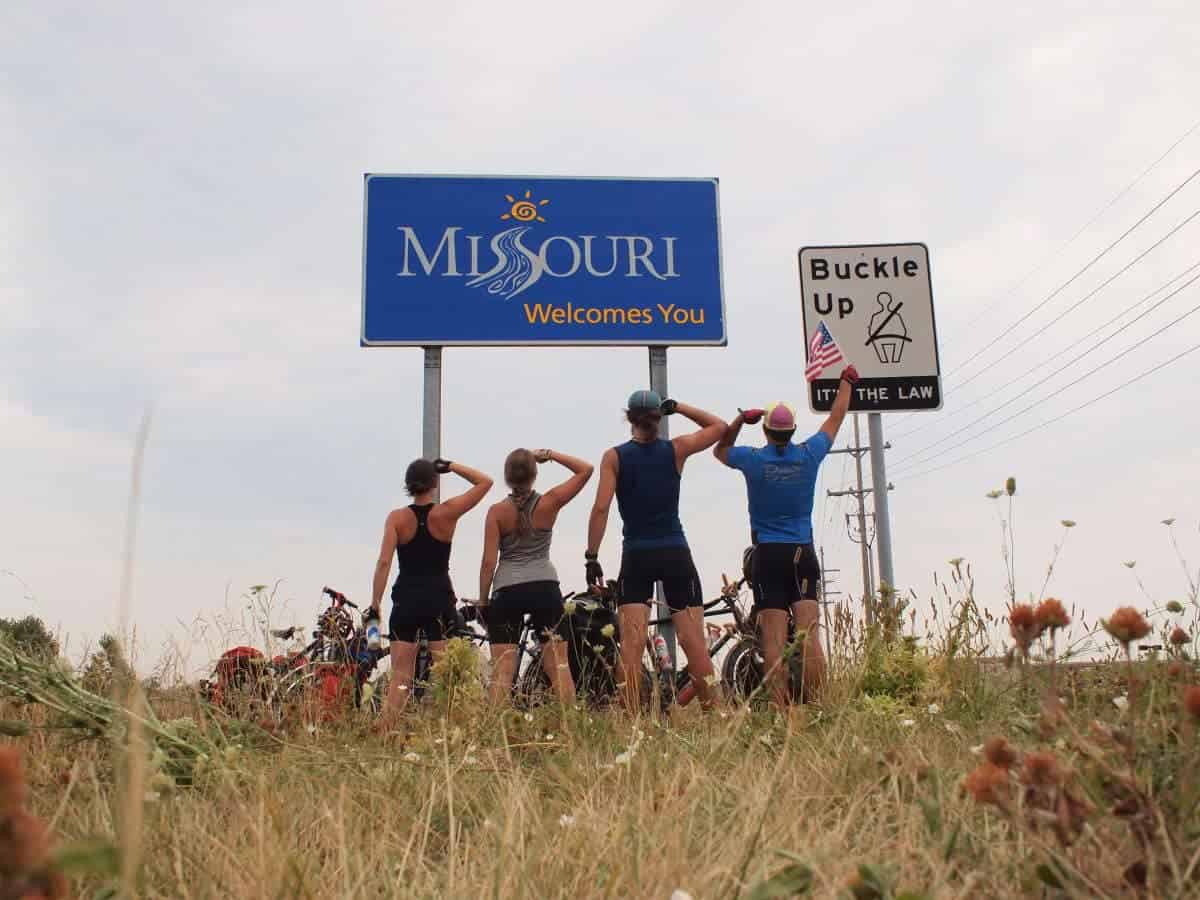 Yes, the Katy Trail is fantastic! A great rails-to-trails.

It sounds like Lauren and Brant rode it west-to-east. One can also ride it east-to-west. It's slightly harder east-to-west because you're going upstream and against the prevailing wind. But the terrain is quite moderate throughout.

St. Charles, Missouri is a beautiful historic town. I also enjoyed Rocheport. Jefferson City is a logical place to spend a night to break the ride in half.

There are a series of rest stops along the route, many of which were railroad stations back in the age.
Thank you for your additions, Ed!
Hi Lauren -

I really enjoyed reading this article after talking to you about the Katy Trail when I was on the Santa Barbara trip. The Katy Trail is really a treasure for us in Missouri and I'm so glad you enjoyed it and you shared your experience (your writing is beautiful)!

I too think the Augusta Brewing Company is the best part of the trail, can't beat enoying a cold beer up on the hill!
Hi Karen! Thank you so much for reading. I loved being able to chit chat about the beauty of the Katy trail with you on trip. I hope you are oh so well and enjoying your mid-western summer!
We can't wait for the Rock Island Trail to intersect with the Katy. That will be another incredible addition to your first Missouri experience. When this happens, this is an open invitation to visit the hospitality of the small town we live in. You have my email address!
Hi Mark, thanks for reading and for the invite! The Katy Trail is such a special thing and this expansion will only make it more amazing.
Hey Lauren! We recently biked the Katy Trail for a press trip and thought it was pretty amazing. We're with you when you say it's an awesome ride. More charming small towns and places to check out than you can count.

We used bikekatytrail.com for a lot of our planning, but also found it to be outdated. A lot of the businesses had closed. There also isn’t a map that has all points of interest in one place. It took us awhile, but we decided that creating a comprehensive map was the best way we could promote the Katy Trail.

We enabled the user submission function, so if there are any places that you really liked, feel free to add them! Especially everything you mentioned in your post that isn't already on! Here’s the link: http://50campfires.com/katy-trail-map/
Top