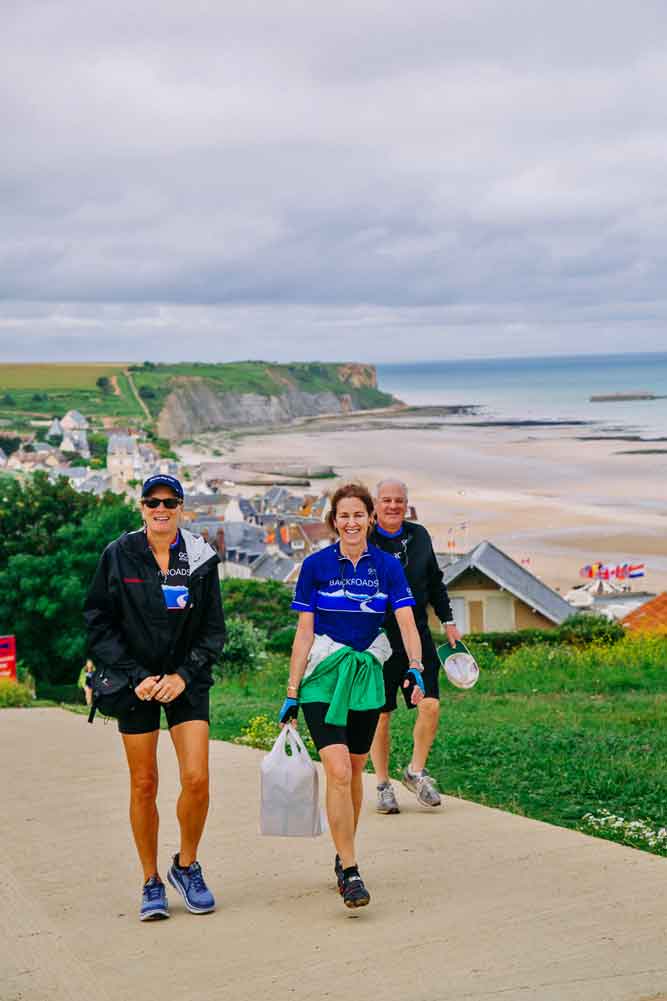 I visited Normandy for the first time in 2012. I had just moved to Paris to start a new job and my parents traveled from the U.S. to visit me. They insisted that we get out of the city to see a different part of France, so I made some suggestions, fighting hard to sway them toward one of the wine regions. "How about Champagne, Bourgogne or the sunny south of France?" I eagerly proposed. My parents had a very different idea in mind. Armed with a rental car and guidebook, we embarked on a three-hour drive west through the bucolic countryside to Bayeux, the first town liberated by the Allies during World War II's Operation Overlord--codename for the Battle of Normandy. 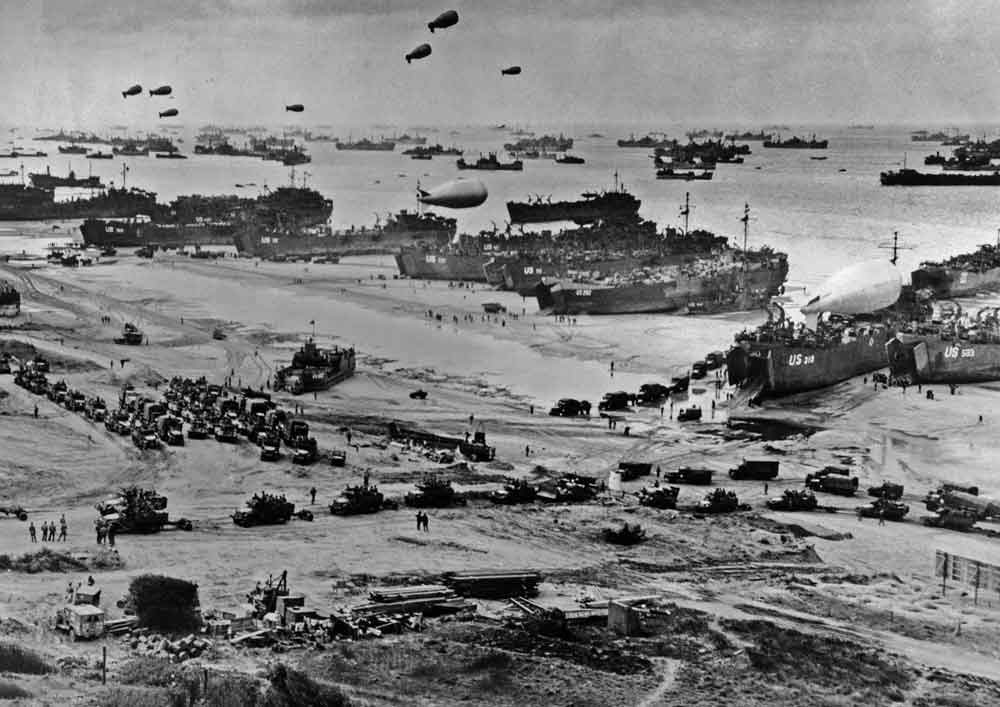 I had never been too keen on history. I remember the many times I sat through old war movies with my Dad. I would often urge him-- sometimes beg him--to change the channel and at least let us watch something in color. So, you might imagine my trepidation of heading into a long weekend of touring battlefields, bunkers and museums. Boy, was I misguided! 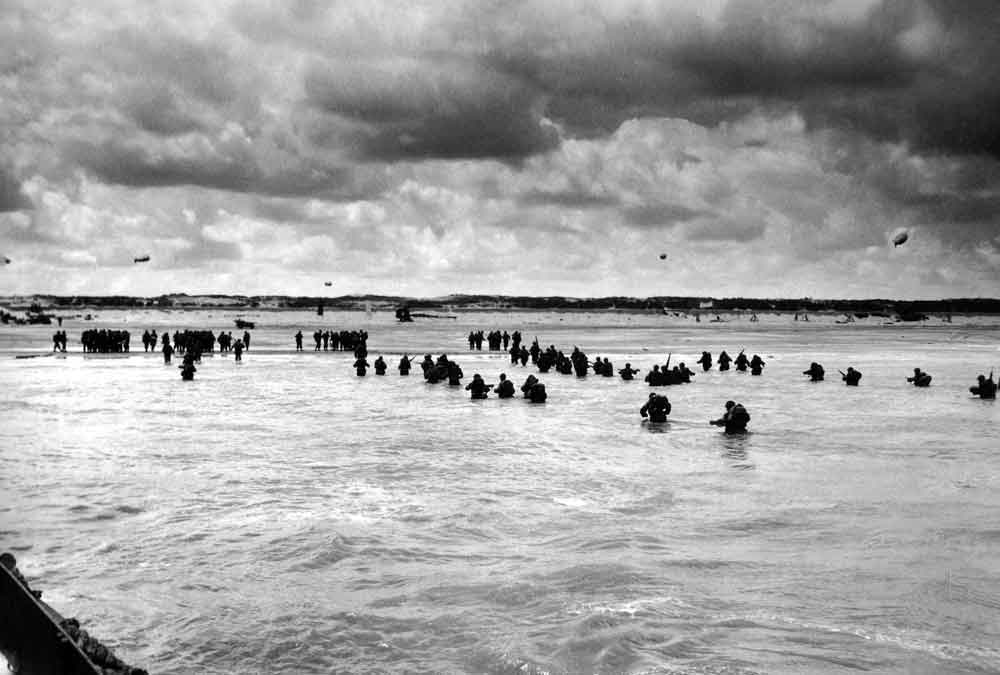 As soon as my parents and I reached the coast of Normandy and stepped out of the car to see the view looking out over the Mulberry Harbor at Arromanches, those black-and-white war images I'd seen in my youth suddenly popped into color. The history books I read in high school and those D-Day documentaries where I struggled to stay awake started to connect in a way that they never had before. On June 6, 1944, the largest seaborne invasion in history took place. 156,000 Allied troops crossed the English Channel attempting to liberate Western Europe from the Nazis. Their first stop - the beaches of Normandy...Utah, Omaha, Gold, Juno and Sword. Being there, on the very spot where it all happened, really brought this piece of history to life for me. And I've been captivated ever since. 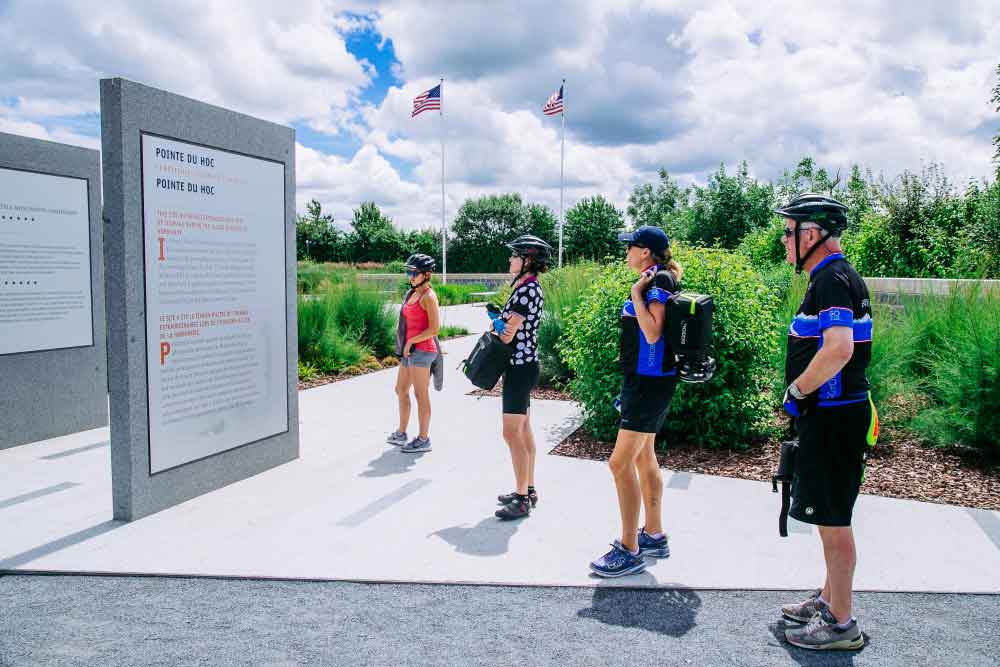 As a Backroads Trip Leader, I love discovering this region with our guests. On our biking and hiking trips in Brittany and Normandy, we visit the famous D-Day landmarks including the beaches where the Allied soldiers landed. But it's really when we cycle down the narrow roads that criss-cross fields and farms or when we hike along the bank of the Aure River as it flows through Bayeux toward the sea, that we can take a quiet moment to reflect on the events that took place here three quarters of a century ago. 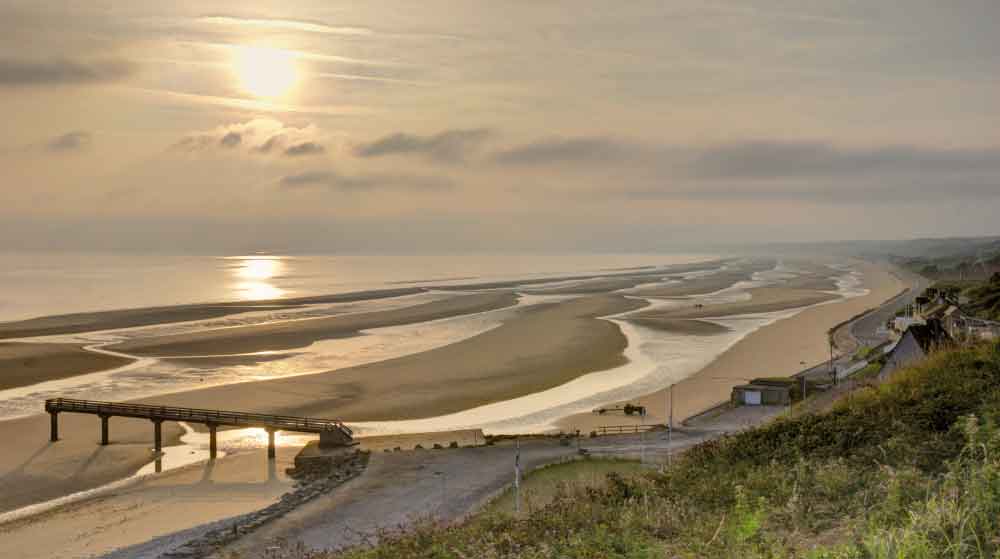 Whether it's overlooking the cliffs at Pointe du Hoc, meandering through the nearly ten thousand stone markers at the American Cemetery or exploring the German artillery battery of Longues-sur-Mer, each Backroads trip to Normandy is extraordinary in its own way. We meet locals who lived through the liberation who generously offer a personal story, anecdote or piece of history to take in. Sometimes fellow trip members describe their personal recollections of D-Day. Sometimes we have the rare privilege of hearing a first-hand account from a soldier who landed there.

This summer marks the 75th anniversary of the D-Day landings and the Battle of Normandy.

Events celebrating the liberation of France are planned to bring this important part of history back to life. There will be military parades, fireworks, and even an airdrop reenactment involving 250 men and women who will descend into the historic drop zones. If a trip to Normandy has been on your bucket list, NOW is definitely the time to plan your own Operation Overlord. 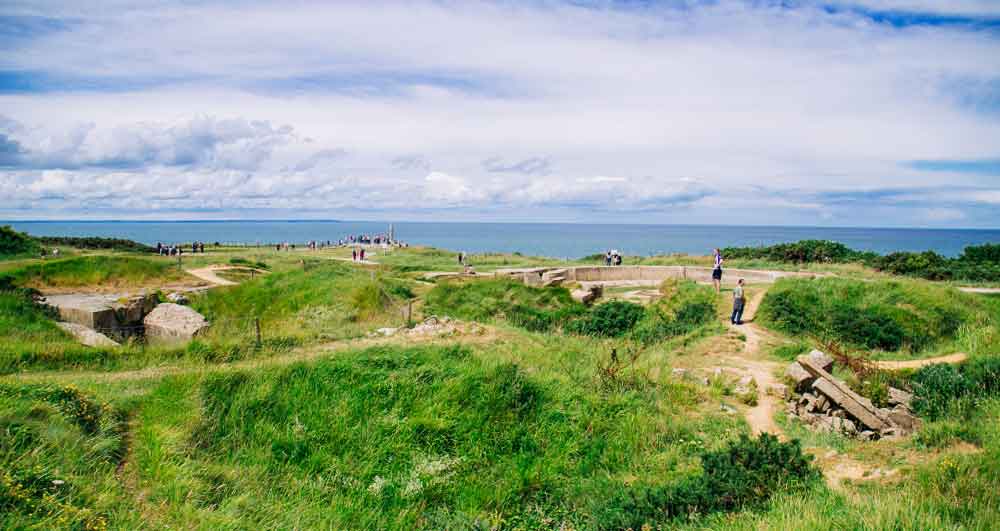 Of course, there's much more to Normandy than its embattled past. No trip to the region is complete without some serious tasting of the four C's of Norman cuisine: cider, calvados, creme and camembert. On Backroads trips we always make sure we have enough time set aside in our schedule to adequately refuel. How about a picnic lunch at a famous Isigny-sur-Mer dairy farm or oysters fresh from La Manche? (You'll find out that it's only called the English Channel on one side.) 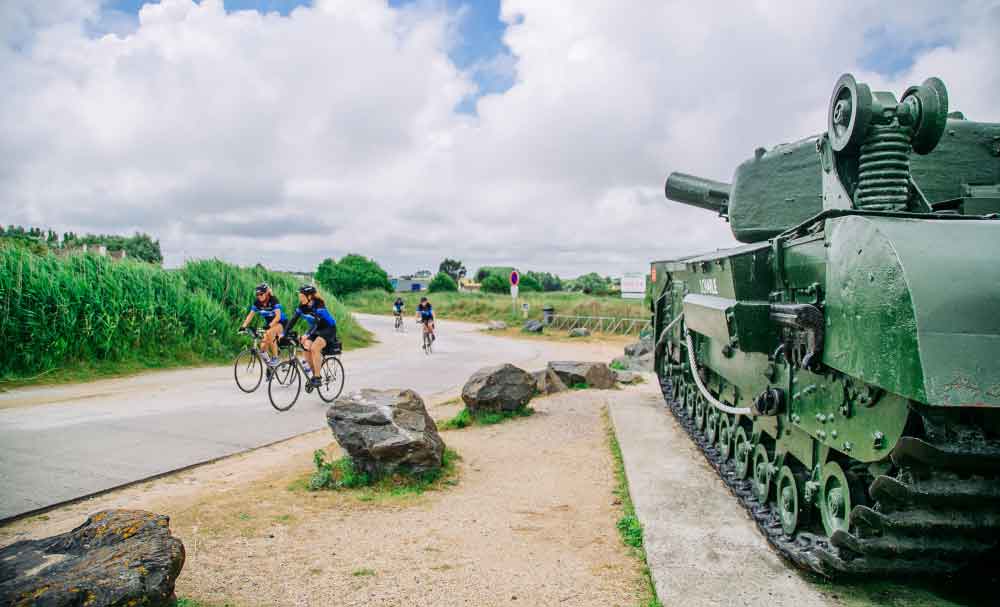 Back in 2012, after that first day of exploring Omaha beach with my parents, I collapsed in our hotel room exhausted from a day of visiting incredible and eye-opening places. We opted to enjoy a picnic of saucisson, camembert, baguette and wine in our hotel room instead of going out to one of the many local restaurants. My Dad turned on the in-room television and stumbled upon a channel featuring an endless loop of Saving Private Ryan, one of the most celebrated films about WWII. I watched the whole movie twice, not once evening thinking about changing the channel. 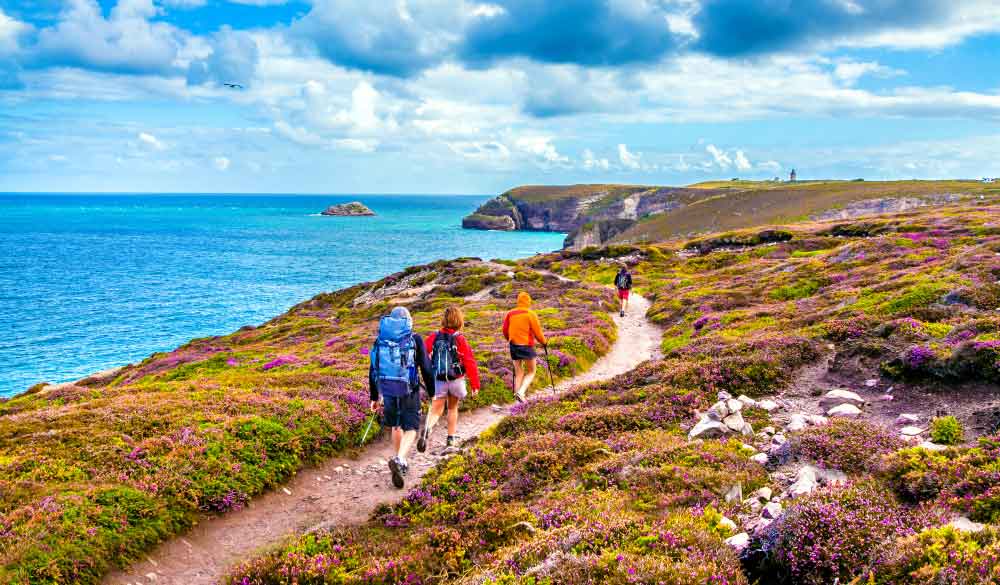 We participated in the Normandy/Brittany bike trip in 2010. Our group rode our bikes to Omaha Beach and we were greeted there by a local guide who took us down to the beach to show us where the Americans came to shore. Later she took us to the cementery where every marker faces the US and each was decorated with a French flag and an American flag. It was Memorial Day! Each of us were so moved! As an added benefit, we met two other couples on that trip who still travel with us on our Backroads adventures nine years later!
Beverly, Thanks for sharing your positive experience of your Backroads bike adventure to France almost a decade ago! Here at Backroads we believes that traveling, particularly to powerful historic sites like Omaha Beach, can result in some intense, rewarding and memorable experiences among our guests that stay with them for years to come. So glad that you're keeping in touch with folks you traveled with before and that you're still pursing Backroads adventures together!
Top