In French, 'castles' translates to 'châteaux' and throughout the country there are many châteaux that embody the extravagance of French nobility from centuries past. The epicenter of this 16th to 18th-century lifestyle was the Loire Valley, located two hours southwest of Paris and the perfect setting for royal summer escapades. The valley's grand castles were often used as hunting lodges, sanctuaries for repose, settings for extravagant parties, and as spaces for music and art. But all of this would be extinguished by the political and social upheaval of 1789 and the guillotine would rise to fame as a symbol of the French Revolution. While the French Revolution led to the destruction and looting of many of the area's châteaux, some of the region's showpieces endured, withstanding the later ruin of World War II and ultimately becoming UNESCO World Heritage sites as well as some of France's most celebrated tourist destinations. Among the most compelling are these spectacular Loire Valley châteaux: Château de Chambord

Arguably one of the most recognizable châteaux in the world, rumor has it that Leonardo DaVinci had a hand in the French Renaissance design of Château d' Chambord. This grand castle boasts 440 rooms, 365 fireplaces and 80 staircases and is far from humble. Construction began in the 1518 under King Francis I who set out to build a large-scale hunting lodge amid 12,300 acres of marsh and woods. Its stunning spires, vast grounds, and meticulously structured halls would turnover to new owners on many occasions, remaining quite vacant throughout its history and today is open to the public. Prepare to be blown away by the royal sized portions of this awe-inspiring castle. Château d'Azay-le-Rideau 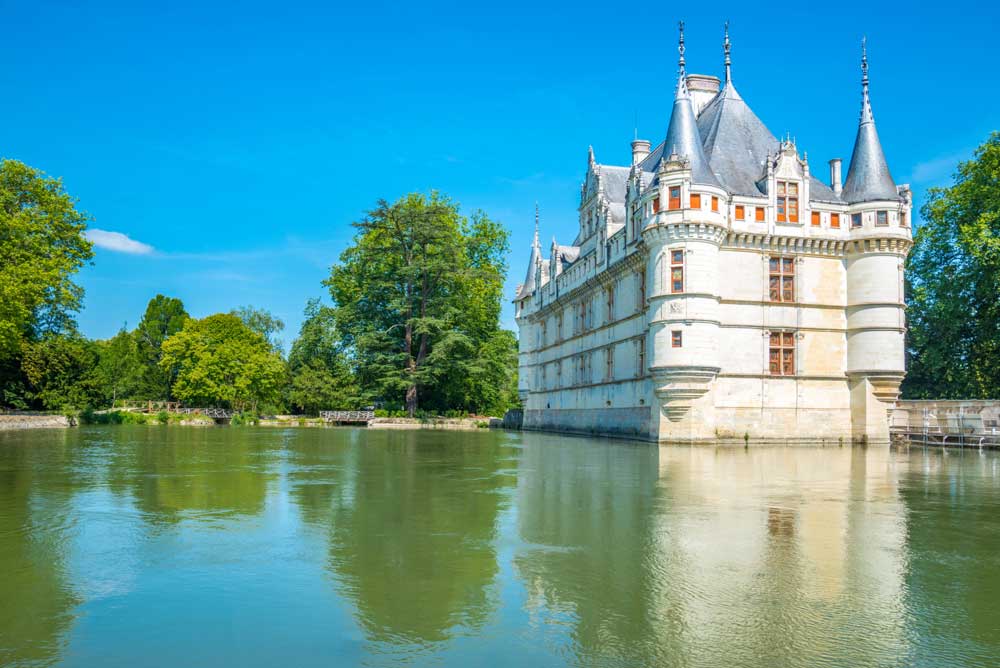 Set on an isle in the Indre River, Château d'Azay-le-Rideau was originally built as a fortress in the 1100's to protect the vital road between Tours and Chinon. Legend has it that in 1418 during the Hundreds Year War, Azay-le-Rideau fell victim to flames when the dauphin (later to become King Charles VII) ordered the town to be burnt to the ground in reaction to an insult from a Burgundian guard. Until the 1800's, the town would be known as Azay-le-Brûlé (Azay the Burnt). Revival began between 1514 to 1527 when the castle was partially rebuilt in French Renaissance design and continued with later Italian Renaissance and neo-Renaissance modifications. In comparison with other Loire châteaux, Azay-le-Rideau is rather small, but its petite size is made up for with charm and the delightful green and blue hues of the surrounding river. Château du Clos Lucé 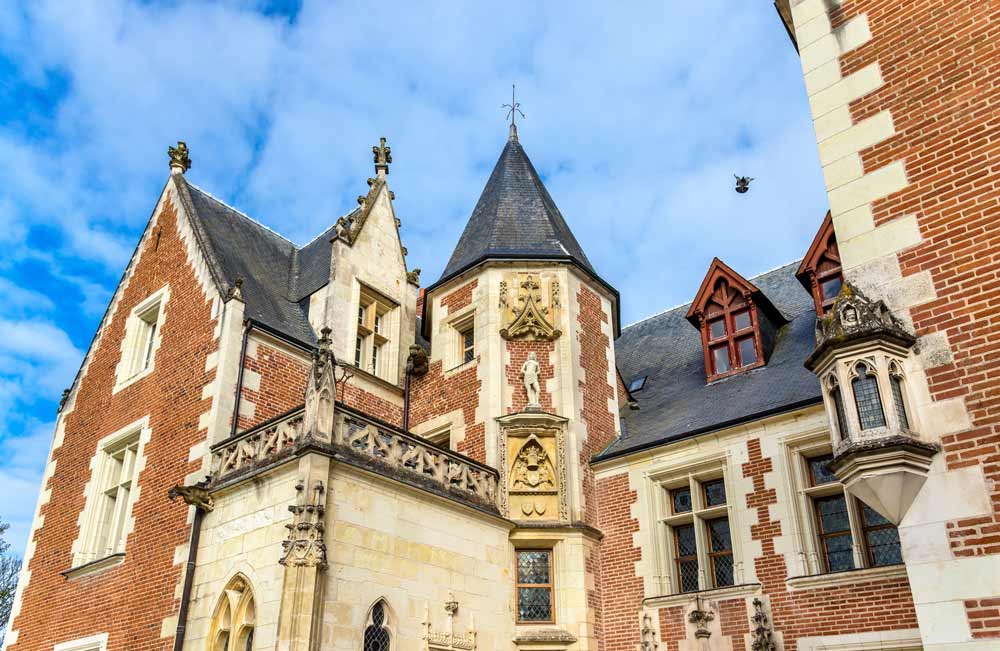 Leonardo da Vinci spent his final three years at the residence of Château du Clos Lucé in Amboise, where he served as "Premier Painter, Engineer and Architect to the King." He arrived from Italy by mule with few paintings in tow and spent his days here expanding on his inventions and studies. While today the château is an impressive museum displaying Da Vinci's achievements, the exquisite manor was built in the late 1400s under Louis XI as a summer residence for royalty. Built with red bricks and tufa stones on a Gallo-Roman foundation, it's an impressive abode with an even more impressive archive. that's bound to bring out the inner Renaissance man or woman in you. Château de Villandry 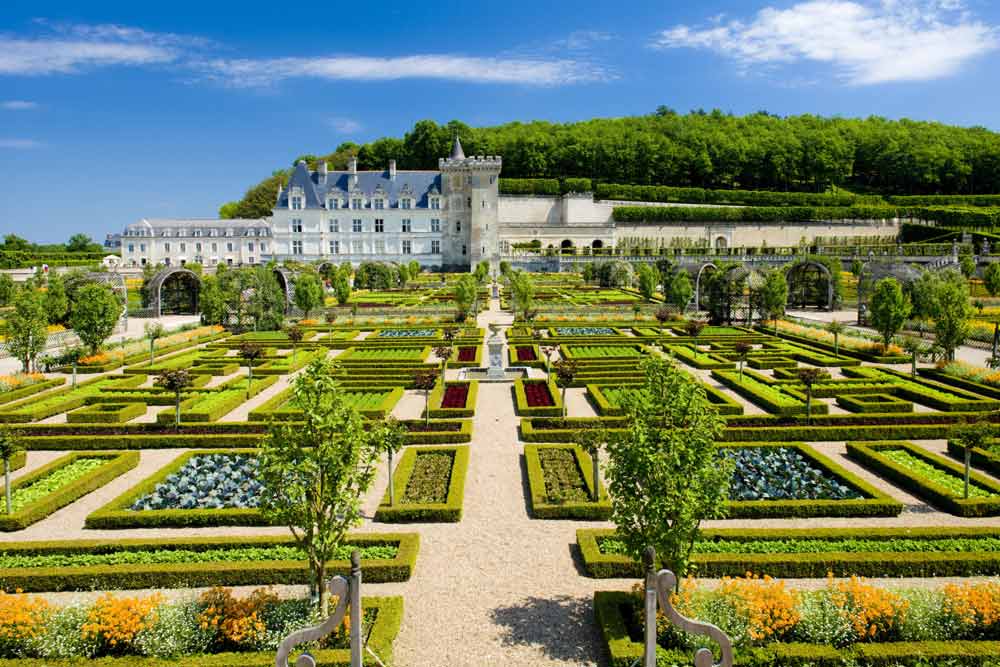 Château de Villandry was one of the last castles in the Loire Valley to be built in the Renaissance style. But the edifice isn't the showstopper here--it's the astonishing gardens. Said to be some of the most gorgeous gardens in France, most of the renovation and overhaul came under Joachim Carvallo, a Spanish doctor intrigued by the rundown grounds on a trip to France in 1906. Carvallo spent a good portion of his life restoring the grounds, which had been neglected for years. Terraces, flower beds, hedges, fountains and herb gardens come together in dazzling tranquility and color and are truly a sight to behold. Château de Chenonceau 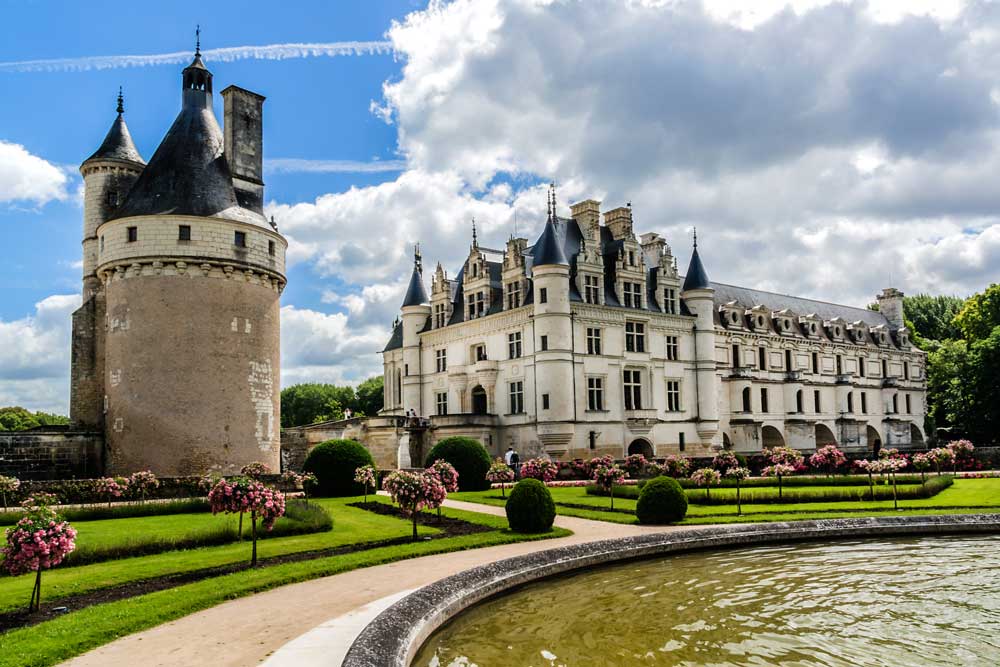 As one of the most highly regarded châteaux in France, Château de Chenonceau is as exquisite as it is one-of-a-kind. The château spans the Cher River with what started as a bridge that eventually became a gallery. Known as the "Château de Femmes" for the six women that were historically involved in the construction and safe keeping of the residence, the chateau would go through an intense period of demolitions and rebuilds before evolving into the romantic castle that is established today. Though the building site dates back to the 1200s, it wouldn't be until the third generation of demolition in 1515 that Thomas Bohier, controller of finances for King Francis I, began to make major changes. When debt caught up with Bohier, the castle was passed to his successor, Henry II and his mistress, Diane de Poitiers. After his death, his wife Catherine de Medici evicted the mistress and got to work, constructing the bridge gallery and cultivating the gardens, as well as playing host to many exuberant parties.  As time went on, Chenonceau emerged unscathed during the Revolution, was used as a hospital for soldiers during WWI and sat in the middle of a dividing point between free and occupied territory throughout WWII. Amid all the historic opportunities for the château to fall victim, it's one of the few castles in Loire to stay protected and maintain its original beauty.