24 Hours in the Netherlands

Did you know most of the Netherlands is below sea level? The name Netherlands comes from ancient Dutch: neder means "low." For centuries, the Dutch have had to fight against the sea to maintain their cities; they've survived by real miracles of engineering where just fish and seaweed should be!

The capital, Amsterdam, is 30 feet below sea level, but it sits in an artificial basin built by two dams: one is upstream to block a lake and the other is downstream to block the North Sea. Although famous for being the "Venice of the North" because of its canals or the "European Las Vegas" for its sexy shops and shows, it has got its own identity and a strong personality. It's the starting point of our Backroads Holland and Belgium Biking Trip, and of our 24-hour virtual tour of the Netherlands, just enough time for a taste of Dutch life. 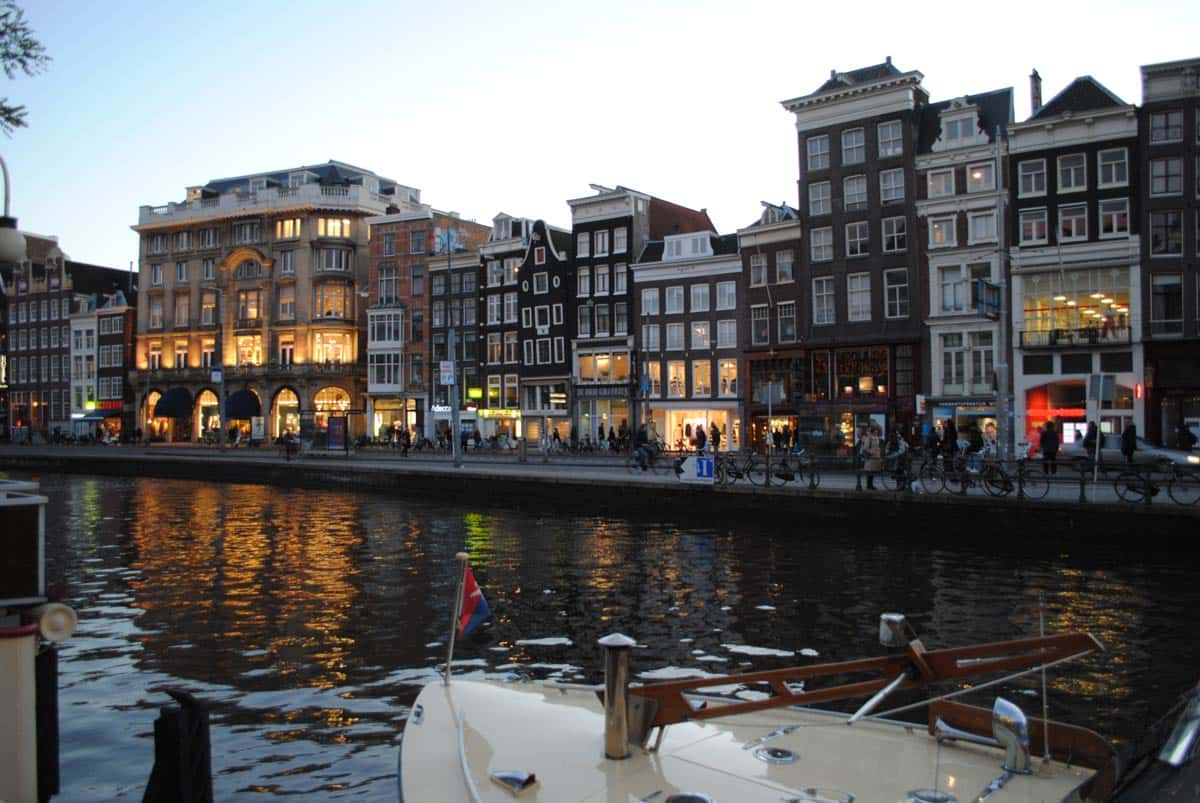 Amsterdam is full of canals, exhibitions, museums and nightlife. The Hague is where the King lives and where all the political life of the country takes place, whereas Rotterdam will shock you a little bit if you compare it to any other Dutch city. It got completely destroyed by bombing during WW2, and now it has such a modern and futuristic look because it was rebuilt from scratch. 7:00 a.m. - WAKE UP! A full day is ahead of you: a whole country is ready, right there, to be discovered. Have a big breakfast and wear comfortable shoes (probably not wooden clogs!): that's the basic requirement!! 8:00 a.m. - Let's start our trip in Amsterdam on a boat tour around the canals. They're pretty cheesy and touristy, but it's the only way to see the whole town center from an unconventional perspective. 9:30 a.m. - After the tour, either go to the Van Gogh Museum, recently reopened after a great renovation and the construction of a new wing, the NEMO Science Center, designed by the architect Renzo Piano in the shape of a boat (the view from the terrace on top is priceless), or the Anne Frank House museum. 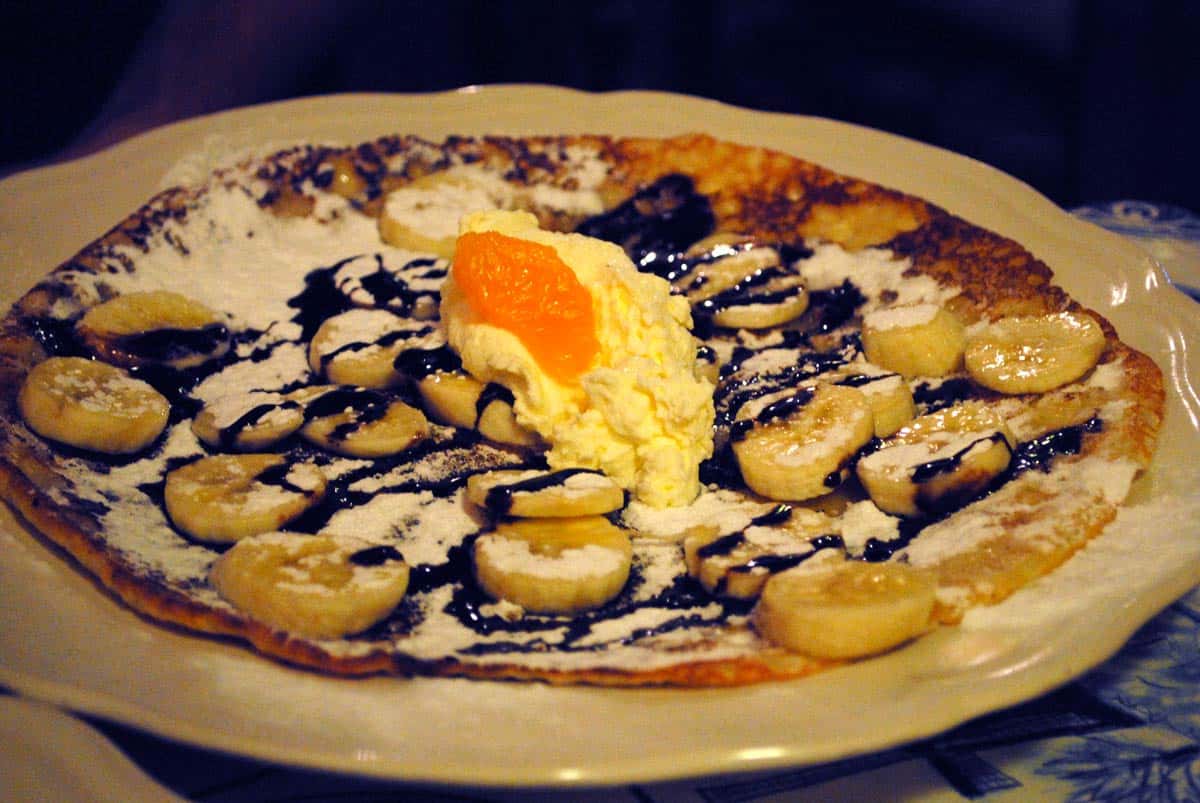 11:30 a.m. - On your way to the central railway station, stop at Upstairs Pannenkoekenhuis, the smallest restaurant in the country, with just a couple of tables situated in a typical old Dutch house (don't go there if you are afraid of really steep and narrow staircases!). This is where to taste the most delicious pancakes ever! 12:15 p.m. - Your stomach full of pancakes, take a short train ride to Haarlem: not as famous as Amsterdam, but - in my opinion - more charming and even more Dutch than the capital city. Walk in town, check out the cathedral of Sint-Bavo, famous for its stunning organ that Mozart apparently played once, walk among the stalls in Grote Markt and taste a typical dish of raw pickled herring. Served on a small plate, it's skewered with a Dutch flag and garnished with onions. Eat it like a locak: look up, dangle the fish above your face and eventually help it find shelter in your mouth! 3:00 p.m. - After visiting Haarlem, you have two options: (1) If you want to be more in contact with nature, visit the Zuid-Kennemerland National Park, where you can walk along the North Sea among beautiful plants and rare species of trees. Go to Vogelmeer lake, a favorite location for bird spotters, right next to Holland's highest "mountain," Kopje van Bloemendaal, at 160 feet tall! 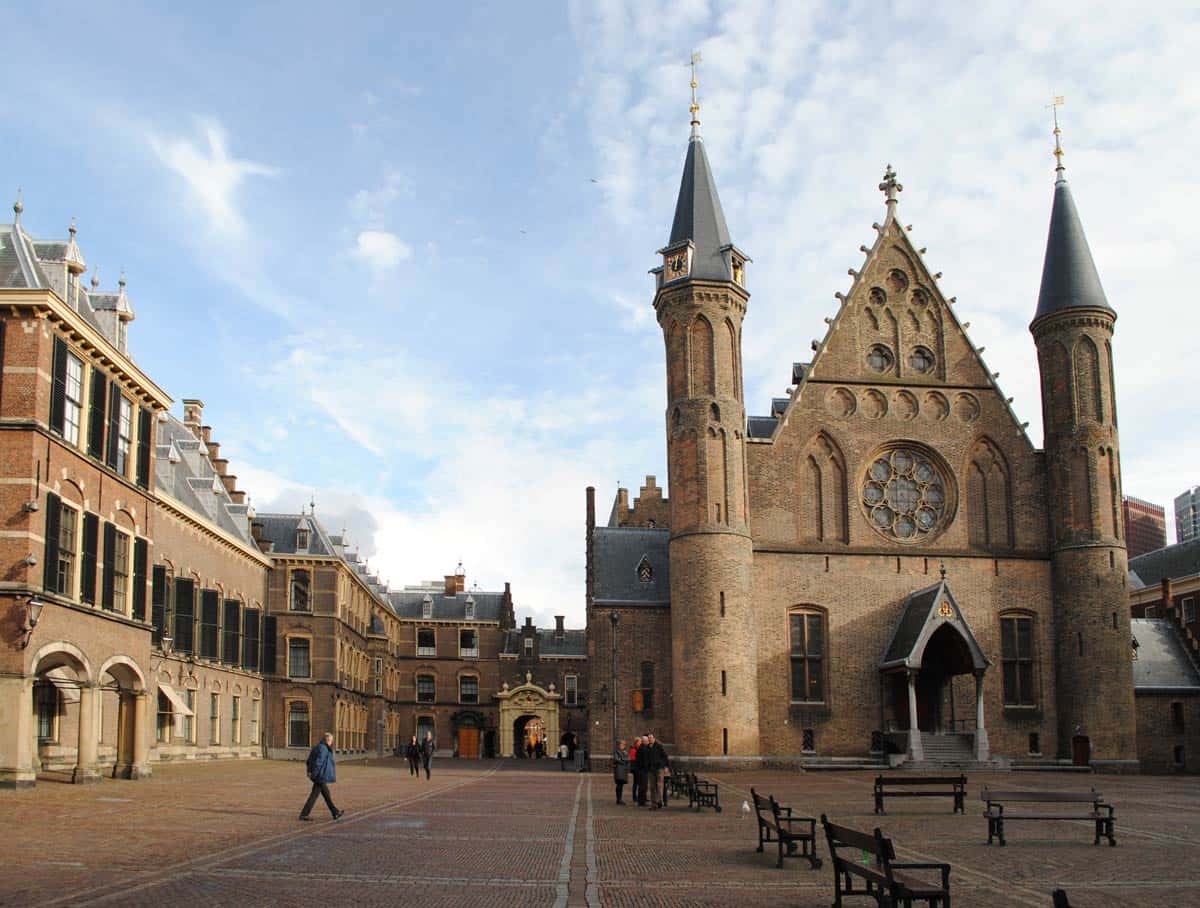 (2) Take a train from Haarlem to nearby Den Haag (The Hague), center of Dutch politics and abode of the King. From the central station, you'll reach the Binnenhof, the brick structure that hosts the parliament. Don't miss the opulence of the central plaza of the Binnenhof, where executions used to take place. Now it is the center of the democratic life of a tolerant, liberal and open-minded country...kind of ironic, don't you think? If you're passionate about science and arts, don't miss the Escher exhibit in Het Paleis Museum, a three-floor museum devoted to the Dutch genius designer. On the top floor is a whole set of experiments where visitors can challenge themselves by entering the Escher world and exploring his concept of perspective. 5:45 p.m. - Before moving to the next city, stop by the Passage, a commercial gallery dating back to the 19th century, originally designed to show precious goods coming directly from Paris. Now it's a great place to relax and to enjoy a nice cup of coffee or a slice of the typical apple pie. 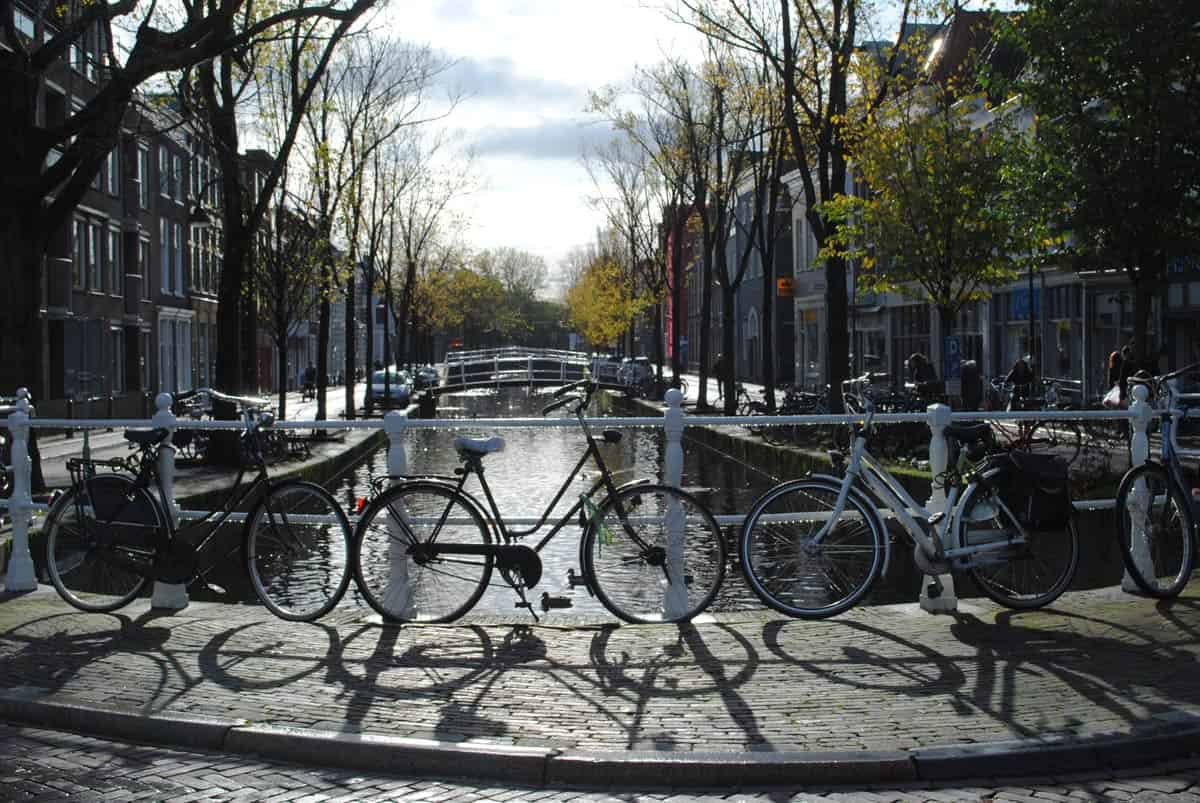 6:30 p.m. - Take the tram (line 1) right outside the Passage toward the small town of Delft, famous for being Vermeer's hometown, where he painted Girl with a Pearl Earring. It's called "the small Amsterdam" because it has the same kind of canals and sophisticated architecture. The Oude Kerk (Old Church) is 800 years old and, due to the wet terrain throughout the centuries, is leaning 6 feet towards the canal. The Nieuwe Kerk (New Church) - not so new at 600 years old - was erected on the market square and the bells ring every hour, lighting up the atmosphere of the whole town, especially on those gloomy, rainy, windy, Dutch winter days. Delft is the right place to buy souvenirs too: it's famous for its original blue hand-painted ceramics, now known worldwide as precious and elegant pottery pieces. 7:30 p.m. - A big change will surprise you while getting off the train in Rotterdam (just 20 minutes from Delft): skyscrapers, neon lights and LED walls. It's the most innovative and lively city in the country, with modern and contemporary art galleries and street exhibitions. Rotterdam is the one city mentioned so far that's completely above sea level. It hosts the greatest and biggest commercial harbor in Europe, called Europoort. If you're passionate about organization, logistics and massive freighters, take the 90-minute Europoort harbor tour. 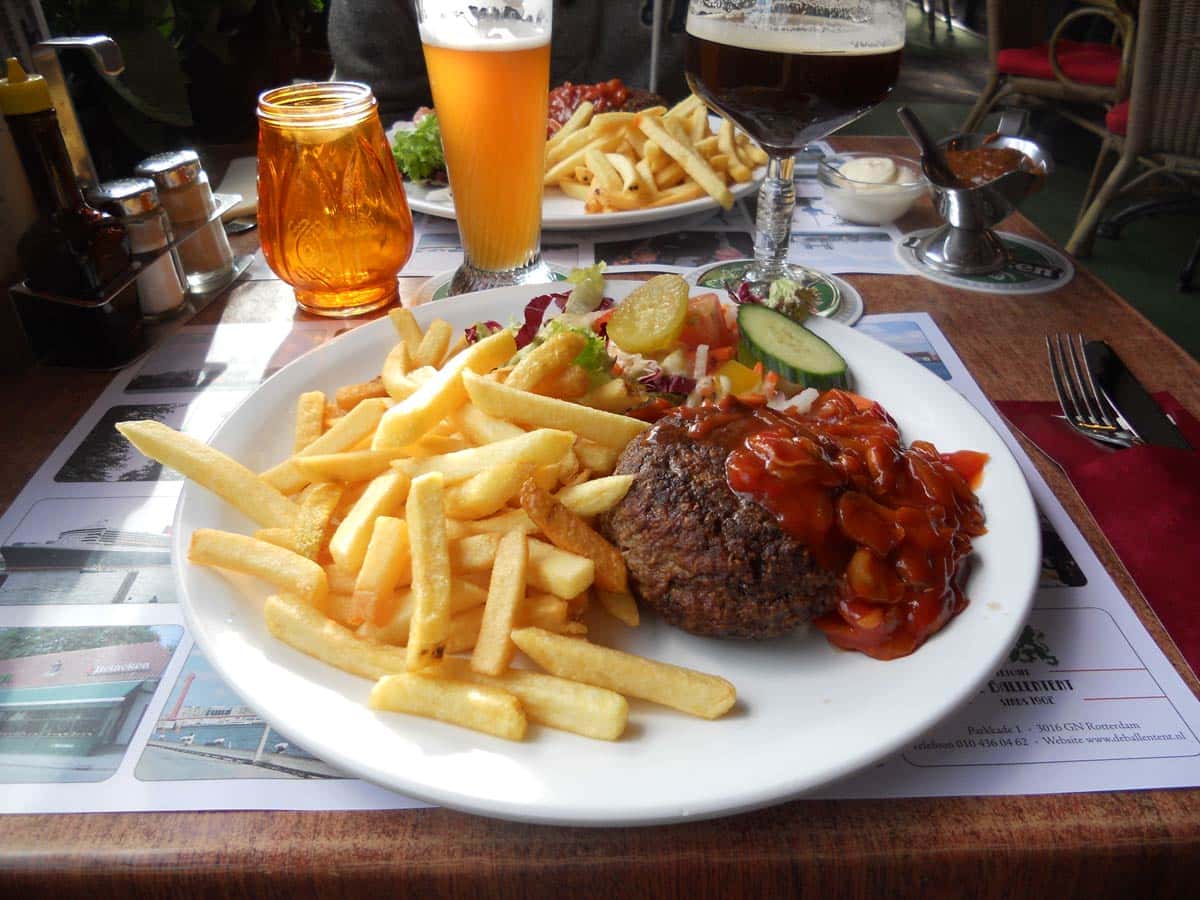 8:30 p.m. - Go toward the impressive Erasmusbrug bridge, called "the swan" by locals, to De Ballentent restaurant. Sit at a nice and warm table with a plate of homemade Dutch meatballs (they're big and served with an onion and tomato sauce on top), looking out at the business area lit up for the night. 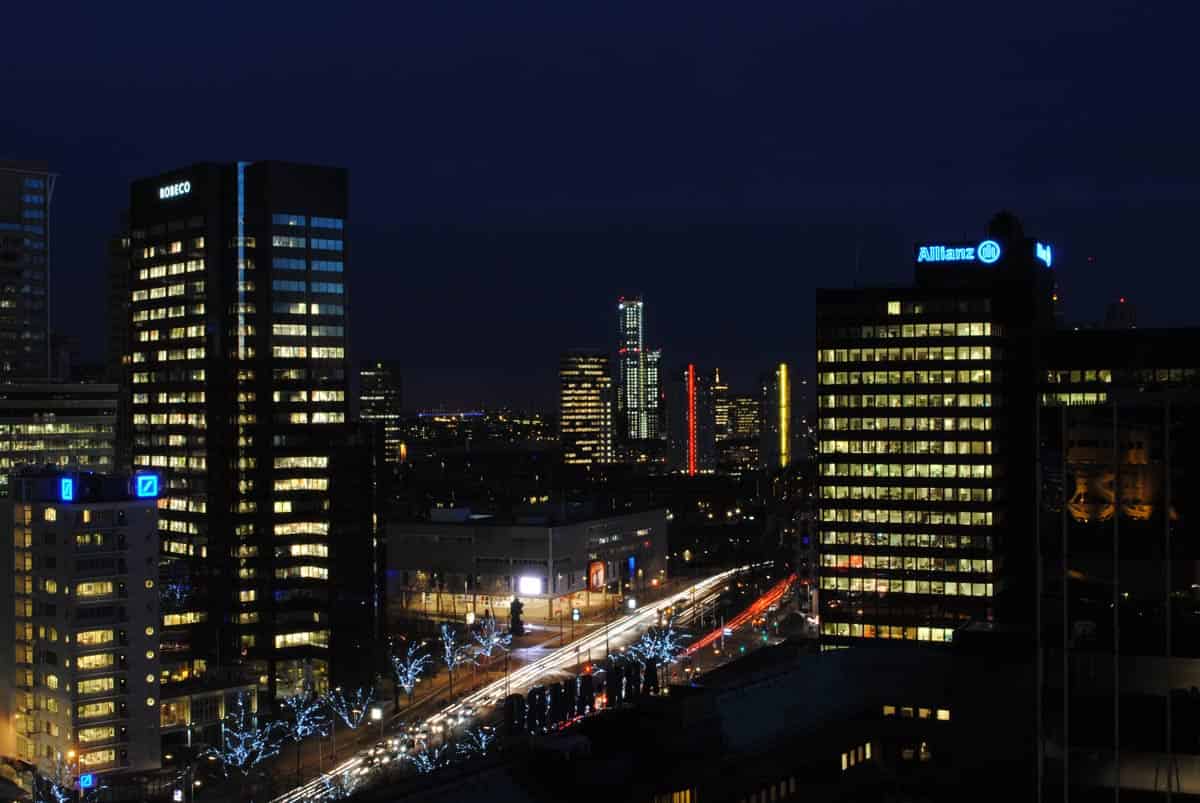 10:30 p.m. - Rotterdam never goes to sleep. Before going out for the night, cross Erasmusbrug or take a three-euro water taxi ride across the Nieuwe Maas to the Hotel New York, the oldest in town with a great history; it's where all the travelers bound for New York used to sleep before their transatlantic journey. 12:00 a.m. - If you're up for some dance moves, reach the Bootleg DJ Café in the city's business area. It's not a huge club, but it's a place you don't want to miss if you like electronic music. 6:00 a.m. - After such a long night dancing you might feel pretty tired but...hey! You made it! Find some poffertjes (like pancakes but sweeter) or bread topped with hagelslag (chocolate sprinkles -- a very popular Dutch confection) for breakfast. 8:00 a.m. - If you're headed back to the US, you'll likely fly out from Amsterdam Schiphol airport. The Fyra high-speed train takes 25 minutes from Rotterdam Centraal station and drops you off at the airport. Tired from the last 24 hours in the Netherlands? No worries. You'll have time to sleep on the plane! I have so many nice memories in the places I've listed here. What I wish is that you'll be able to fill the same piazzas, churches, restaurants and fountains with laughs, smiles, nice pictures and stories to tell back home.

Hi Alessandro. My husband and I are planning to go on the Backroads Sicily bike trip in May (we have a hold on the May 14 trip and will be booking it tomorrow). When the bike trip ends, we plan to spend a few additional days in Sicily and then a few days in Amsterdam. Was hoping to speak to you to get input on how best to use our time since you seem to be a great resource about both places. Could you please contact me at your earliest convenience? My cell phone number is 914-522-7114. Many thanks, Michelle Gersen
Please see above request for a call.
Hi Michelle. Sounds like you have a spectacular trip lined up. One of our Trip Consultants will be contacting you shortly to answer your questions. Happy Travels!
*area
Top