Wildlife of the Galápagos Islands 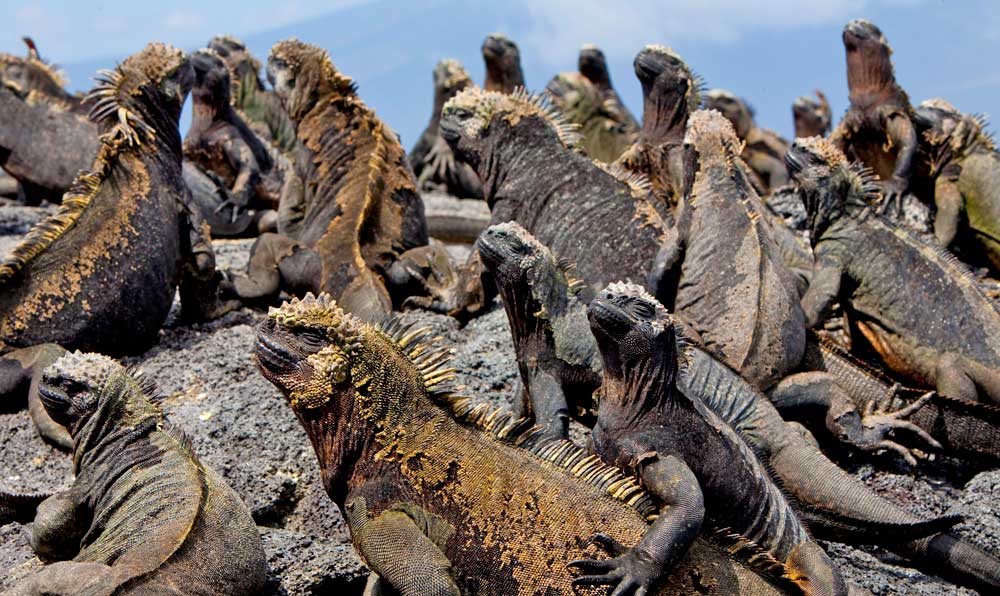 Some 600 miles off the coast of Ecuador you can find one of the most unique places on earth - an archipelago of volcanic islands that contain one of the highest levels of biodiversity in the world. The Galápagos Islands, often referred to as a living museum and a showcase of evolution, support a vast array of wildlife including colorful birds of all shapes and sizes that swoop over massive giant tortoises as they lumber slowly through the verdant highlands, while salt-spitting marine iguanas troll the turquoise undersea realm then bask on the sunny beach to warm up. 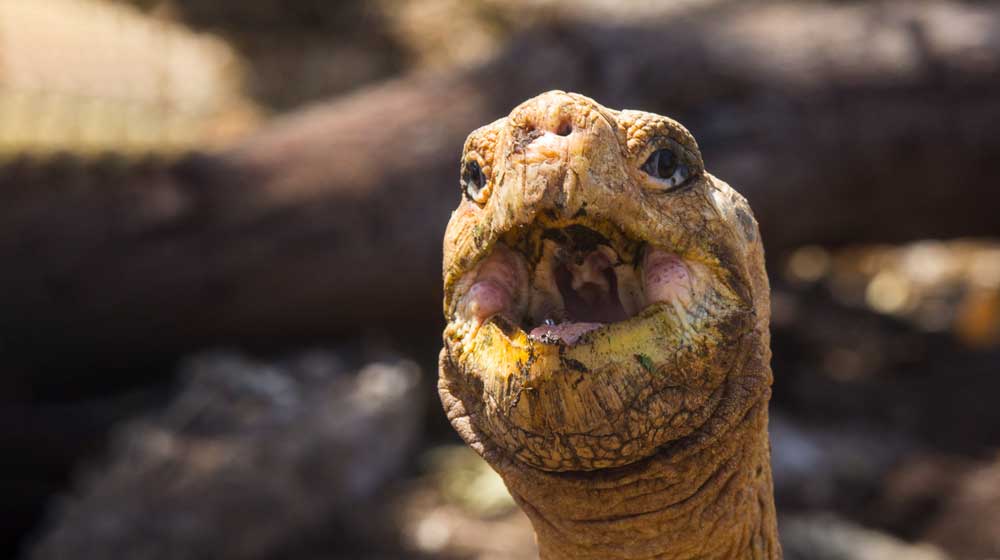 From lush green highlands, to rugged volcanic craters to mangrove-lined white sand beaches, the Galápagos is truly a one-of-a-kind travel destination. The species of wildlife that you can encounter here arrived long ago by wind or wave and only managed to survive in this hostile environment by evolving to adapt to their new surroundings. Since the archipelago was isolated for so long, the animals that evolved here remarkably failed to develop an instinctive fear of humans. This means that visitors have the unique opportunity to get up close to the animals and sometimes even interact with some of them. Here are some ideas for meeting these remarkable creatures on their turf.

Snorkeling and Kayaking with Marine Life 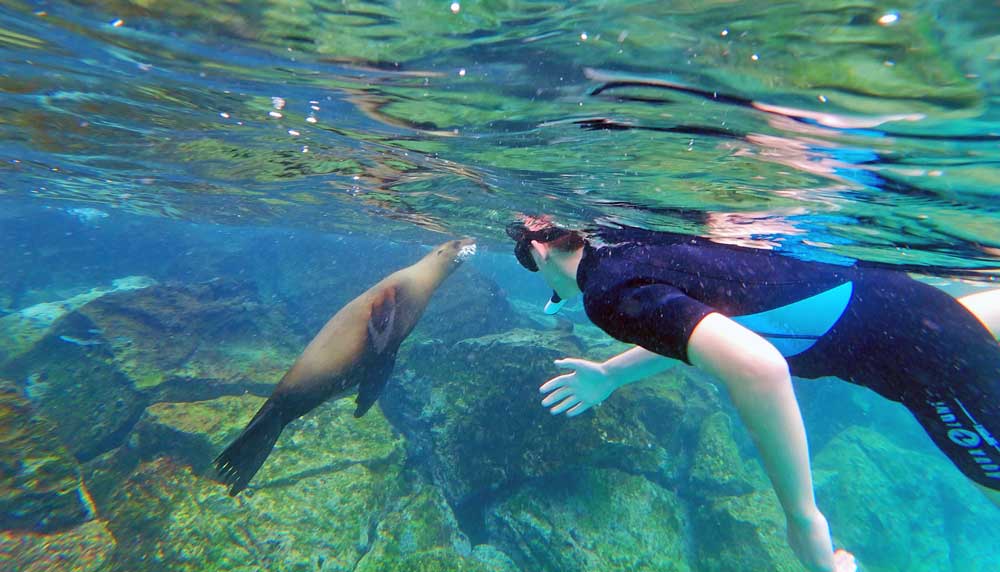 Located at the confluence of three ocean currents, the Galápagos has become a melting pot of marine species as well as one of the richest ocean ecosystems in the world. Best described as an "underwater wildlife spectacle," the island waters are abundant with life ranging from bright corals to graceful manta rays to massive and majestic sea turtles grazing on bits of floating kelp. Snorkelers are often greeted by an array of vibrantly colored fish - including parrotfish, butterflyfish and the stunningly blue damselfish, just to name a few. At night, groups of jellyfish--which look surprisingly like translucent party streamers--and small, black-tipped reef sharks can be seen circling the illuminated areas bordering the islands' many piers, in search of their evening meal. Meanwhile, small Galápagos penguins--which are endemic to the islands and the only species of penguin found north of the equator--along with plump sea lions and massive, black marine iguanas can be seen sunning themselves on the nearby shores of white sand beaches such as Tortuga Bay. 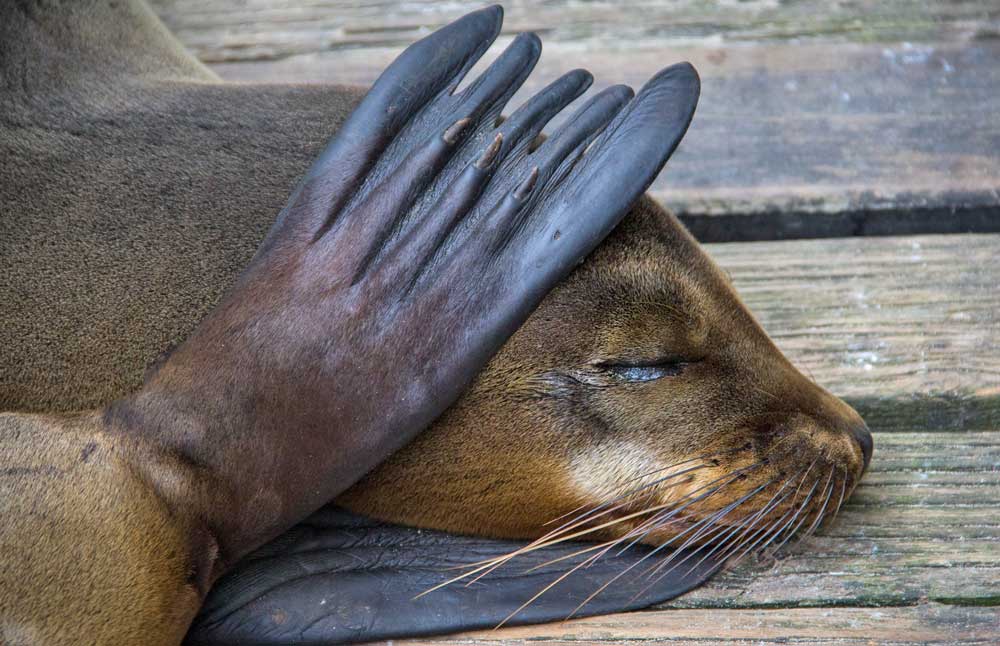 And the best part, because all of the marine life on the islands is so comfortable with people, many of them barely bat an eyelash when approached. This is especially true for the sea lions. If you're lucky, they can become your favorite swim buddies to splash around the shallows with. Grab your bathing suit, some flippers and your snorkel (or a trusty kayak if you'd prefer) and head out to see for yourself! 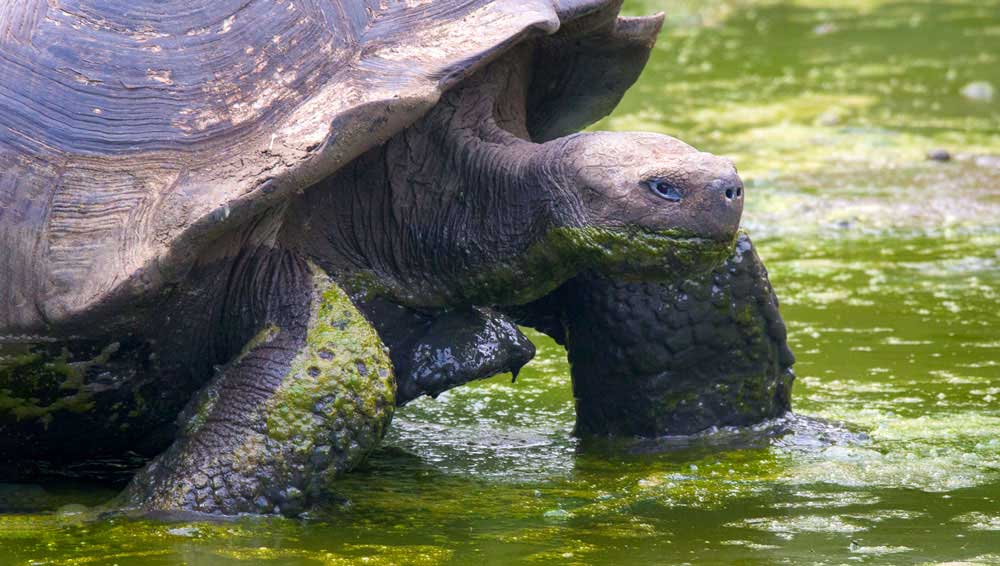 Equally, on terra firma, the Galápagos Islands will not disappoint. Populated mainly by reptiles, the land-based wildlife is a mix of lizards, iguanas and the Galápagos' most notable inhabitant, the giant tortoise. Weighing up to 600 pounds--25% of which is their shell alone--giant tortoises are truly amazing creatures. Scientists estimate they arrived on the islands 2-3 million years ago by drifting from the mainland of South America on a combination of vegetation rafts and their own power. Enjoying a relaxed pace of life and their fair share of guavas, which grow abundantly in the nearby highlands, these creatures can live for over a century. Places like the Chato Giant Tortoise reserve on Santa Cruz Island make for a beautiful viewing environment, as you can meander through the rolling green highlands with a delicious organic coffee in hand while enjoying a look at these marvelous giants. Grab a mug, your camera and your hiking boots for this once-in-a-lifetime island adventure!

Put a Bird On It 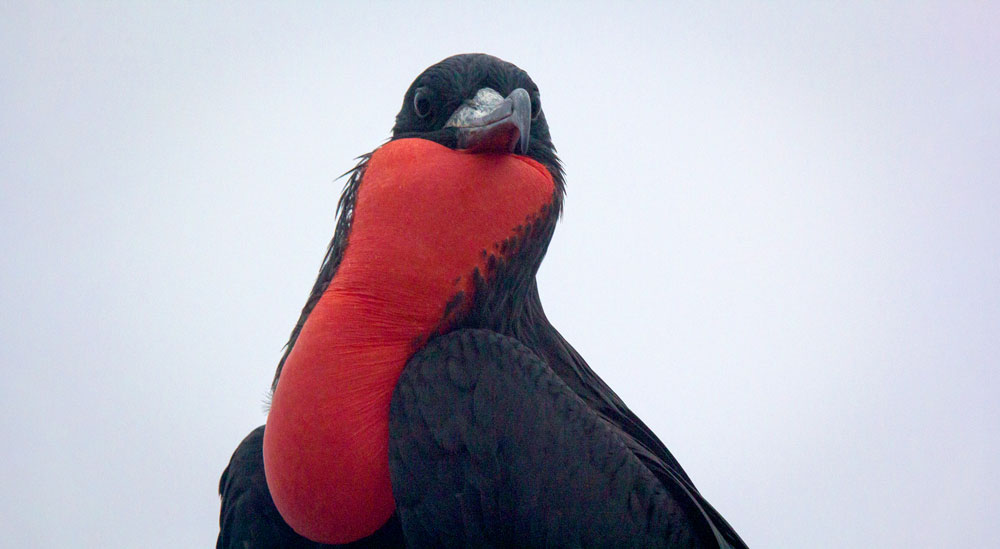 Birds, birds, birds! The Galápagos is full of many amazing varieties and types of birds. From impressive red-breasted frigates to dazzlingly pink flamingos to the famous finch (of which there are 13 varieties), the Galápagos have a bird for everyone! Some of the best bird watching can be done on foot via urban exploration, as much of the winged wildlife (including the large brown pelican) can be found close to the numerous fish markets where locals deposit their daily catch. These winged bandits do their best to nibble on a variety of freshly caught delicacies that can range from the exotic-looking orange spotted scorpion fish to lobster, depending on the season. If you'd rather, head to the shoreline to catch a glimpse of the famed blue-footed boobies as they dive-bomb the surface of the water for a tasty fish snack. Easily recognizable by its distinctive bright blue feet, the male bobbies display this evolutionarily selected trait in an elaborate mating ritual that involves lifting their feet up and down while strutting in front of prospective females. If you are musically inclined, keep your ears attuned to the notes of the islands' many warblers and mockingbirds, especially when making your way through the mangrove tree-lined path to Tortuga Bay. These lovely yellow and grey birds have a wide range of singing melodies, all of which are quite pleasant to the ear. Don't forget your binoculars and your bird book, as the islands' winged fauna will surely provide a feast for your eyes and ears!

A Plethora of Life

There's no denying it...the Galápagos is one of the world's best locations for wildlife viewing. These islands represent an almost unique example of how ecological and biogeographic processes can influence the evolution of life forms. Further, the archipelago's ongoing seismic and volcanic activity--which has been going for more than 4 million years --make for a delightful and stunning landscape to house this great variety of creatures, as numerous smoking craters and ancient lava flows abound throughout the islands. Almost no other place on earth offers a natural protection of such a complete continuum of geological and ecological features. What are you waiting for? Experience it with Backroads on one of our magnificent active travel adventures.