Is spinning good training for a biking trip? Will it make you strong enough to face the demanding hills of Mallorca Spain? I was curious about this topic and I tried to investigate a little bit. I eventually found all the answers I was looking for when I met an extraordinary sporty couple: Andrea and Caterina. 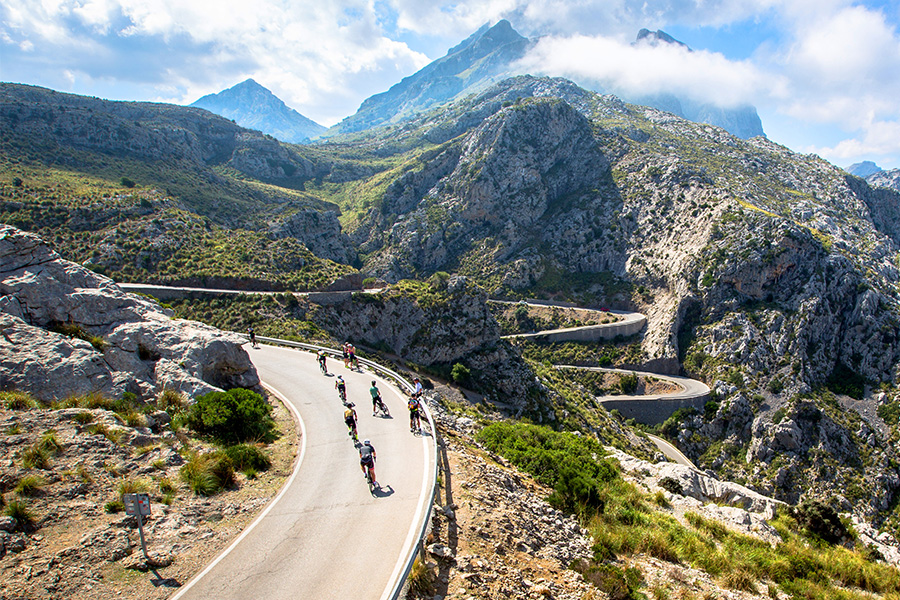 Sports were one of the first topics that brought Andrea and Caterina together in 2007. Andrea was already into biking, a hobby that eventually became a true passion for him. On the other hand, Caterina was already a great spinner. After they met, they started sharing their time and their hobbies. Andrea started going to spin classes while Caterina exchanged the spinning bicycle for a road bike. They're an extremely active couple--ascending creeks in Calabria in the summer, running every other day, biking to work--no matter the snow, rain or August heat! Now they always schedule a spinning class together on Friday evenings after a whole week apart (Andrea works away from home and comes back just for the weekends). "Spinning makes me feel good, gives me so much good energy, both physical and mental," says Caterina. "It's an hour of training but it's fun too, because of the role that music plays." Music gives the rider a lot of energy, the energy that's needed right when you think you can't do it anymore: "It gives you the same motivation to keep on pedaling, knowing that you still have a full hill to climb," adds Andrea. Then there's the role of group dynamics. He explains: "Being in a same room with other people, seeing them struggling and making some hard work to keep up with the rhythm is like biking in a group, you don't want to leave anyone behind and you don't want to be left behind." This is the reason why you challenge yourself while spinning as much as you do while biking. I guess it's a matter of pride, but also of cross-motivation to some extent: you want to keep up with the group and you don't want to get out of rhythm, just like on a hill. 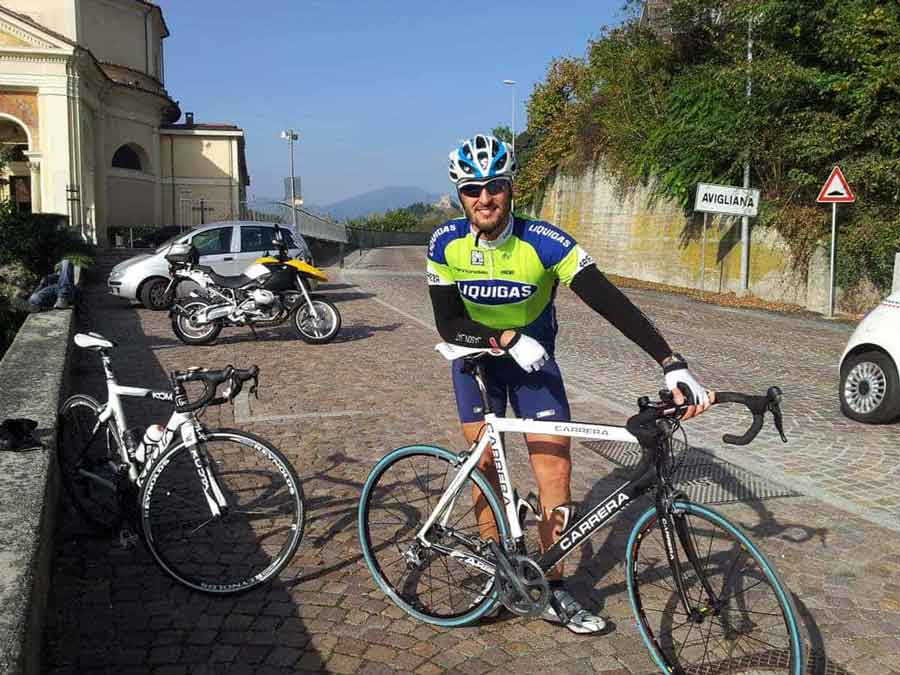 Andrea and his bike in Avigliana, Turin, Italy

The main difference between spinning and biking is seen in the intrinsic constraints of each sport. What you face while biking is a hill that you can't change: the only option you have is either to climb it or to turn around and go home. You can, of course, set your own pace. On the other hand, the constraint with spinning is not how hard the climb is--meaning how hard you turn the handle--but rather the rhythm you need to follow. On a bike you can lower your speed to cope with the efforts needed to climb the hill, but with spinning all you can do is reduce the friction to have enough strength to keep up with the music. But "this doesn't mean that training with one sport doesn't allow you to increase your performances in the other," says Caterina. "It's all about pushing your limits forward." In agreement, Andrea claims that he's improved his cycling thanks to his spinning training. Another difference between biking and spinning is time. "When I go biking, I usually ride for no less than three hours, otherwise I don't see why I should bother," says Andrea. "And when you pick a biking route it's because of the sounds of nature surrounding you, the hardness of the climbs, the length of the ride." But when you exercise on a spinning bicycle at a gym you are in a closed--and often sweaty smelling--room with no natural sounds and for no more than an hour. Caterina explained to me that everything about spinning is about reaching your limit and, over time, pushing it forward. With biking, it's pretty uncommon to have such an intense ride for such a long time: you have ups, downs, flat sections, and the hardest parts of the ride are often spread out. You can still work to push your limits out on the road, it's just not as simple. 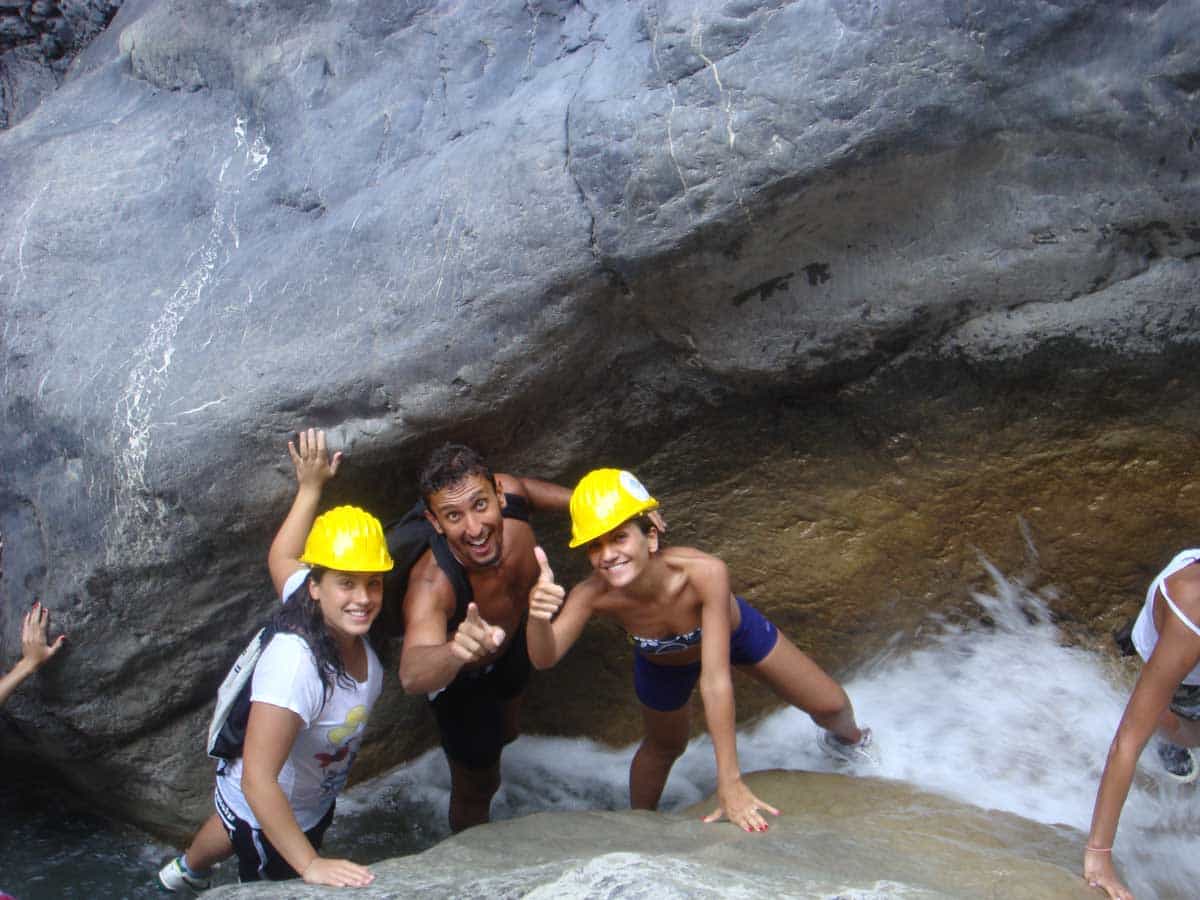 To sum everything up, I would like to share with you the active lives of Andrea and Caterina as an inspiration for your everyday life. Make your daily routine active and make your everyday a Backroads day! And if you're training for your upcoming Backroads Bike Tour, know that spinning is a great option.

Good article! I better go hop on the indoor bike!
[…] of a couple of months’ regular riding, and general exercise such as running, swimming or perhaps spinning, to get into shape. No personal trainers, gym routines or pull-ups from the door frames at home […]
The photographs added to the quality and interest of the article.
Top