Minarets and mosques make up the evening Istanbul skyline

The punctually repetitious ezan (Islamic call to prayer) will forever ring distinctly in my ears--that shrill wailing cry echoing from loudspeakers perched on minarets towering above nearly every town throughout Turkey. And never will I forget the hospitality that I experienced during my six weeks of cycling from the rocky eastern Black Sea coast, through the historic hills and caves of central Anatolia, and along the rugged sun-drenched Mediterranean coast before eventually turning north to Istanbul--the geopolitical gateway between Europe and Asia. The peculiar positioning of Istanbul makes it the only city to be located on two distinct continents--Europe and Asia--and is quite literally split right down the middle by the Bosphorus Strait, which connects the Black Sea with the Sea of Marmara and eventually the Mediterranean. This body of water serves not only as a major international shipping route, but also as a thoroughfare for massive migrations of fish between the cold waters of the Black Sea to the warmer Mediterranean Sea. These bountiful seasonal migrations account for the prevalence of seafood in the typical coastal Turkish diet, and nowhere does this become more obvious than in Istanbul.

Local anglers line the shore, casting for schools of migrating fish[/caption] As the hot humid days of summer give way to crisp autumnal afternoons, local fishermen can be found lining the shore, shoulder to shoulder, rod or net in hand, casting for submerged schools of tasty transients en route to warmer southern waters. The aroma of the day's catch sizzling over charcoal grills wafts through the air as fresh fish fillets are served on soft baguettes and topped with a simple salad of tomato, onion, cabbage and peppers. Freshly squeezed lemon lends the perfect amount of zest to balance out the tastiest fish sandwich this side of anywhere.

Balik ekmek in hand, we observed as fisherman continuously pulled fresh fish from the watery depths

During these particularly plentiful periods, purveyors can be heard throughout the city touting the local delicacy, "Balik ekmek! Balik ekmek!" ("Fish in bread! Fish in bread!") But buyer beware, many restaurants and food carts are simply serving up imported frozen fish fillets, particularly in the overtly touristy parts of town--you'll know it when you're there. For a truly authentic balik ekmek, head to the water--the banks of the Bosphorus--where you can witness your lunch being pulled directly from the depths. Observe as the successful angler skillfully fillets his recent catch before tossing it on the grill. For roughly a buck each, you can easily eat your fill of fresh fish sandwiches before resuming your city stroll, exploring the myriad mosques and minarets that compose Istanbul's mystical skyline. And don't feel that you have to limit your seafood experience to the daytime hours. Many anglers come equipped with propane lanterns and continue their hunt through the night, fanning the flames from their grills in hopes of hooking yet another hungry passerby. 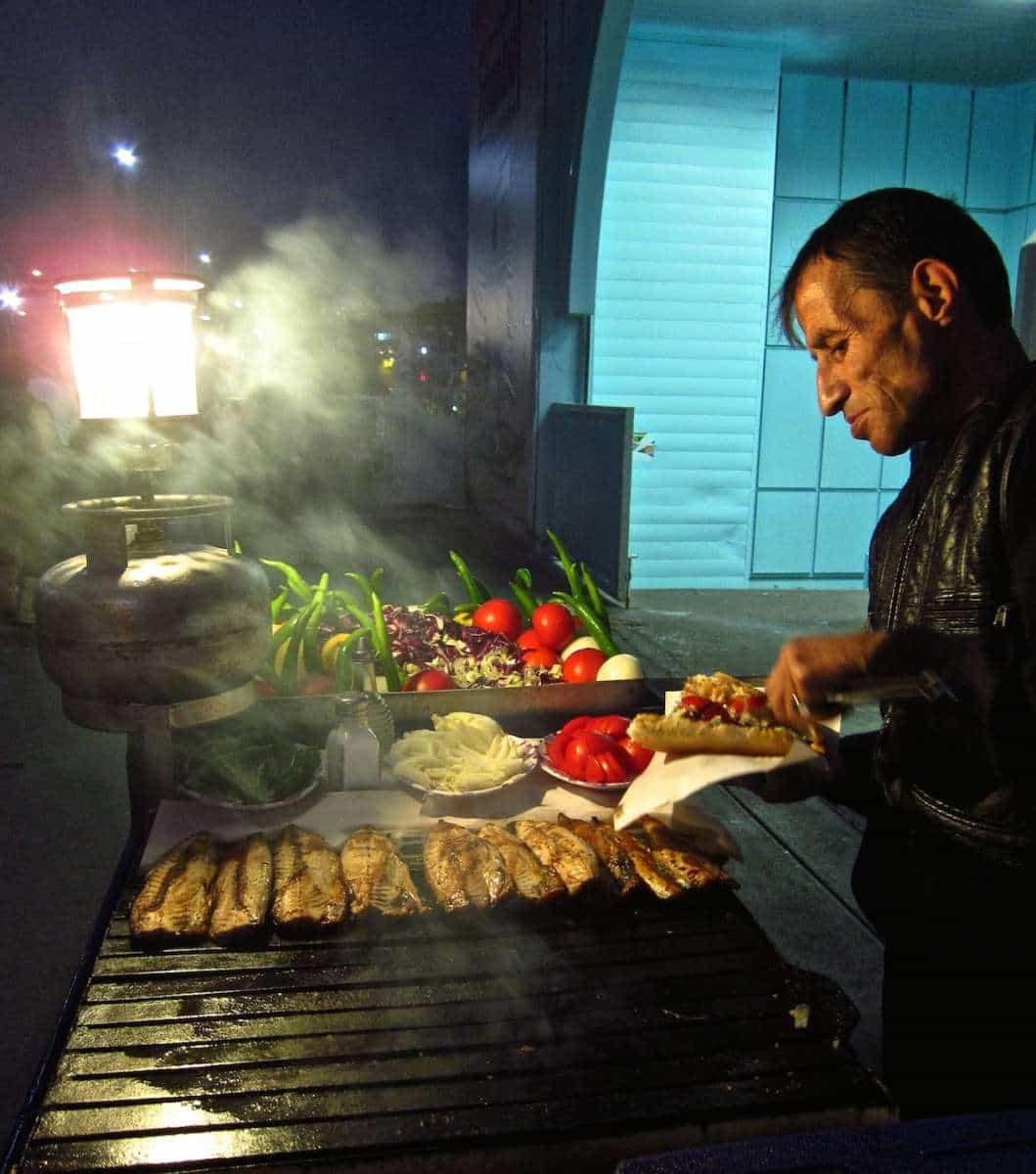