Just shy of the Arctic Circle, Iceland is an island nation located in the northern Atlantic Ocean in Nordic Europe. It has a population of approximately 332,000 over its 40,000 square miles, making it the most sparsely populated European country. It’s a volcanically active hot spot that features pristine glaciers, sulfuric hot springs and stunning fjords alongside the trendy bars and nightlife of the buzzing capital, Reykjavík. 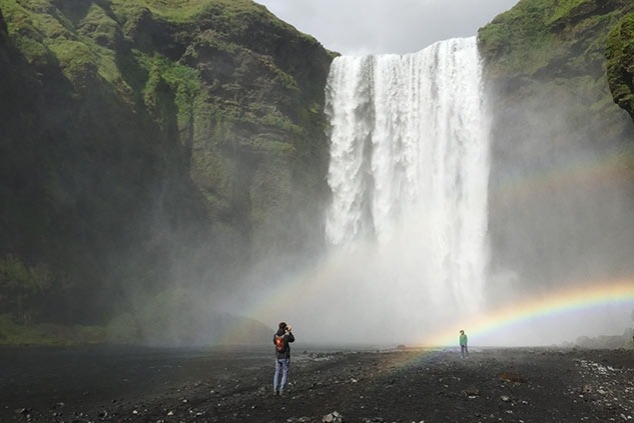 Prior to Scandinavian settlers arriving, Celtic monks inhabited the nation as early as 770. Swedish Viking explorers were the first to make permanent residence there in the early 800s.

The Icelandic Commonwealth was then established, and this remained until the 13th century, when it was dissolved and incorporated under the Norwegian monarchy.

By 1814, Iceland was a Danish dependency, but seeds of independence were planted in the 1850s. Denmark granted this in 1874, and Iceland officially had its own constitution and limited home rule.

The sovereign state declared neutrality in World War II, although British (and then US) troops invaded and occupied the land.

On June 17, 1944, Iceland voted to abolish the monarchy and officially established itself as a republic. Iceland also enjoyed economic prosperity following the war, including a massive industrialization of the fishing industry.

In the early 2000s, Iceland made its economy increasingly based on international investment banking and became a hugely prosperous country. The country was rocked, however, by the global financial crisis of the late 2000s, and the economy didn’t stabilize and grow again until 2012. Since that time, tourism has become an increasing staple of the Icelandic economy.

On March 20, 2010, Iceland made international headlines when the volcano Eyjafjallajökull erupted. While the eruption was small (as far as eruptions go), the resulting ash caused massive air traffic cancelations and delays across western and northern Europe for almost a week.

Iceland’s culture is largely influenced by its Scandinavian roots, and due to its historically isolated nature, it has undergone little external influence. Its language, for example, is the closest to Ole Norse of any modern Nordic language.

Iceland’s literary scene is particularly vibrant. Reykjavík was named a UNESCO City of Literature in 2011, and Icelandic sagas are renowned to this day. Iceland boasts the highest number of bookstores per capita in the world, as well as the highest publication rate per capita. (A staggering 10 percent of Icelandic citizens will publish in their lifetimes!)

Art is also a cornerstone of Icelandic culture, with many galleries offering diverse exhibits, shows and festivals.

Icelandic music has very much made it into the mainstream. Most notable artists include The Sugarcubes, Of Monsters and Men and Björk.

When traveling in Iceland, keep some of the following in mind:

Iceland uses the Icelandic króna. While you might find a rare place that accepts US currency (this will likely only be in Reykjavík), expect to use Icelandic money throughout your trip. Exchanging money is straightforward at the airport, bank or any currency exchange. Avoid exchanging money at hotels, where you’ll likely encounter high transaction fees. ATMs are readily available in most towns—though not all are 24 hour. Credit cards are accepted at most shops and tourist establishments.

Tipping is not compulsory in Iceland. However, Icelanders are generally quite well traveled and will be aware of (and appreciative of) a tip.

Iceland’s a fairly relaxed place to travel, and visitors will encounter few serious social taboos. However, the nation does take its natural beauty and stunning scenery very seriously. Follow and respect all signs and instructions at main tourist locations, and camp in designated areas. It’ll keep you—and the scenery—safe! Also, when using public pools, it’s often mandatory to shower before entering. (Don’t worry, shy travelers. Major areas, such as the Blue Lagoon, offer cubicles for privacy while washing.)

Public restrooms are plentiful in Reykjavík and are often found at major tourist locations as well. Bathrooms are clean, modern and often handicap accessible. As is common throughout Europe, travelers might encounter a pay toilet every so often. They won’t be expensive, but this can catch some travelers off guard. Keep a few coins handy, just in case!

Water is safe to drink straight from the tap throughout Iceland. Beyond that, most lakes, rivers and streams that run clear are also safe places to drink. Iceland boasts some of the cleanest water around, so you don’t have to shell out for overpriced bottled water here.

The best times to visit Iceland depend on what you’re looking to do during your stay. If you’re seeking warmer weather, aim for July and August; if you’re after nearly 24 hours of daylight, June is your best bet. Those looking to hike and to easily traverse roads should stick to summer months.

Whale-watching is most successful in June and July (May to August in the north), while partaking in the Icelandic hot spring culture is most invigorating in the winter months. Those in search of the Northern Lights should plan a trip for Mid-October to March, but be warned. The Northern Lights are capricious and dependent on many factors. Avoid planning a trip with the sole purpose of seeing the phenomenon—or you might end up disappointed!

Outside of the capital, Icelandic towns tend to be spread apart and sparsely populated, but many serve as great jumping off points for scenic activities.

Venture northeast for a distinctly Icelandic experience—whether that’s whale watching or enjoying the midnight sun (from June 11 to June 29).

Húsavík: In the summer months, this breathtaking town offers some of the best whale-watching opportunities in the world.

Known internationally for the purity and transparency of their Iceland spar (crystals), the Eastern Region also boasts calmer weather and a weekly car and passenger ferry to the European continent in the summer.

Mountainous and punctuated by steep hills, the region of the West Fjords is beautiful but closed off by snow and ice for several months each year. Plan accordingly.

Ísafjördur: An ideal base for exploring rugged hiking on the Hornstrandir Peninsula.

The southern tip of the North Island, Wellington Region offers views of the turbulent Cook Strait and is composed of rough, hilly, stunning terrain.

Wellington: The capital city and the proud bearer of its nickname, the Windy City, Wellington’s also known as the nation’s cultural heart, housing the National Archives, National Library and more. (Don’t forget to take the iconic cable car to the top of the city for breathtaking views.)

Reykjavík: In addition to being the capital and the largest city in Iceland, Reykjavík is the cultural, governmental and economic heart of the nation. It’s distinctly modern, vibrant, quirky and cosmopolitan and a can’t-miss for any traveler.

A diverse array of natural wonders await you in Iceland’s Southern Region, from awe-inspiring waterfalls to black sand beaches. It’s little wonder the South is one of Iceland’s most visited regions.

A geothermal spa that features mineral-rich waters and a view of otherworldly lava fields. The Blue Lagoon is one of the most well known (and well visited) attractions in Iceland.

The original geyser from which all other geysers take their name.

Waterfalls abound in Iceland, but these three should be on any Iceland to-do list.

The Northern Lights are visible in Iceland from September through April, and Iceland’s northern position and lack of cloud cover make it one of the best spots to soak in the Aurora Borealis.

How to Get to Iceland

US citizens can enter Iceland without a visa and stay for up to 90 days. You’ll need a return ticket to prove your intent to leave. (Note: Iceland isn’t in the European Union.)

US citizens need a passport to enter Iceland. Your passport must be valid at the time of entry and should be valid for at least three months after your intended departure date.

When entering Iceland by air, you’ll most likely arrive at Keflavík International Airport. This is the main international travel hub. For domestic flights, you’re more likely to use Reykjavík Airport, which also services Greenland and the Faroe Islands.

There are no public railways, but Iceland does feature an extensive network of long-distance bus routes. Domestic flights are also available.

Most travelers opt to rent cars and traverse some (or all) of Route 1, the Ring Road that circles the perimeter of the island nation. Biking’s another popular option, and many buses are outfitted with bike racks, making day trips feasible.

Icelandic is the national and official language of Iceland. Because English is compulsory in school, however, English is widespread. A language barrier for English speakers is practically nonexistent here.

Even though you can often get by with English, you can still try your hand at Icelandic with these simple phrases:

Some characters in the Icelandic language will look unfamiliar. Here’s a quick pronunciation guide:

Because of its unique geography, Icelandic cuisine relies heavily on fish and features few fruits and vegetables. Lamb and dairy are also common. Spices are used sparingly—and sometimes not at all. For the braver foodies, boiled puffin is considered a local delicacy.

Coffee is common and available throughout Iceland, and Coca-Cola is very popular among locals.

Brennivín (burned, or distilled, wine) is a signature Icelandic alcohol. For travelers looking to indulge, beware. The potent brew isn’t nicknamed “Black Death” for nothing!

Strong beer wasn’t legal in Iceland until 1989, which gave rise to another Icelandic original, bjórlíki: vodka mixed with a low-alcohol pilsner.

Read our full article: Food in Iceland - What to Know and Eat

If you do need assistance from law enforcement, Iceland has one emergency number: 112. Use this number for everything from fire to crime to search and rescue. You can reach this number at any time by voice or text.

The largest safety hazard in Iceland is the land itself. With active volcanoes, rugged lava fields, thundering waterfalls and geothermal features, natural hazards are everywhere, and the weather’s notoriously unpredictable. Be prepared (with appropriate clothing and other essentials) before doing any adventuring. As an independent traveler, stick to the well traversed Ring Road. Venturing into Iceland’s interior is best tackled with a guide or other professional.

Established in 1979, Backroads is a pioneer in active, immersive and off-the-beaten-path travel. Now operating adventure tours in over 50 countries, our passion for discovery and our desire to experience the world in original ways continue to inspire our pursuit of new adventures. Explore all our Iceland tours here, and we hope this guide will be enlightening as you plan your next great adventure!