For me, the last few years have been nomadic to say the least, as I have lingered in no particular place longer than a month or two at a time. And the few phrases that I know in various Asian languages scarcely afford the opportunity to engage in meaningful conversation. So, while traveling I choose to experience a culture in a different manner. I choose to experience a place through its cuisine. And that's exactly what I did in Vietnam. 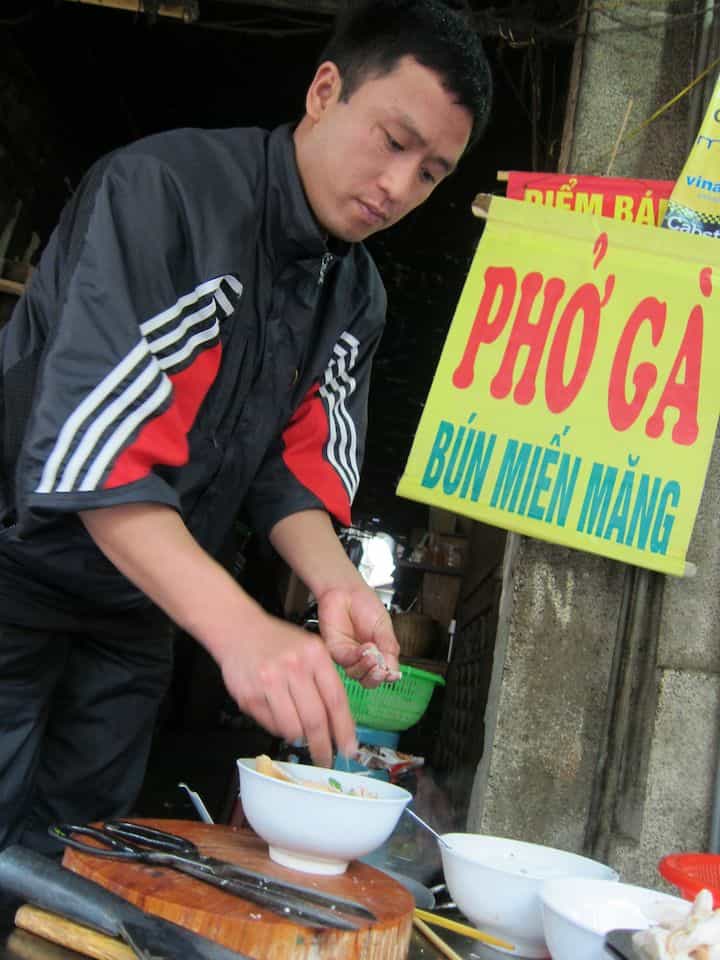 Preparing pho ga at a street-side noodle stand in Hanoi

Initially, many meals were ordered through sheer gesticulating, and more than once I flapped my arms in an effort to pantomime chicken (word is simply ga). Little by little the names of my favorite dishes were added to my vocabulary, and even how to order them properly in Vietnamese. Of particular interest, I learned that within each dish one can find the symbolic presence of five elements that correlate to the health of particular organs of the body. Each of these elements are manifested not only by the flavor of various ingredients, but also by the color of ingredients, with white, green, red, black and yellow symbolizing metal, wood, fire, water and earth, respectively. So let us examine breakfast, the most important meal of the day. After spending 27 hours on a bus from Vang Vieng, Laos, to Vietnam, all I wanted--as I hungrily wandered the streets of Hanoi--was some fruit, yogurt and muesli, which had been easy enough to find in Thailand and Laos. But here the streets were noticeably devoid of such sweet, "typical" breakfast foods. 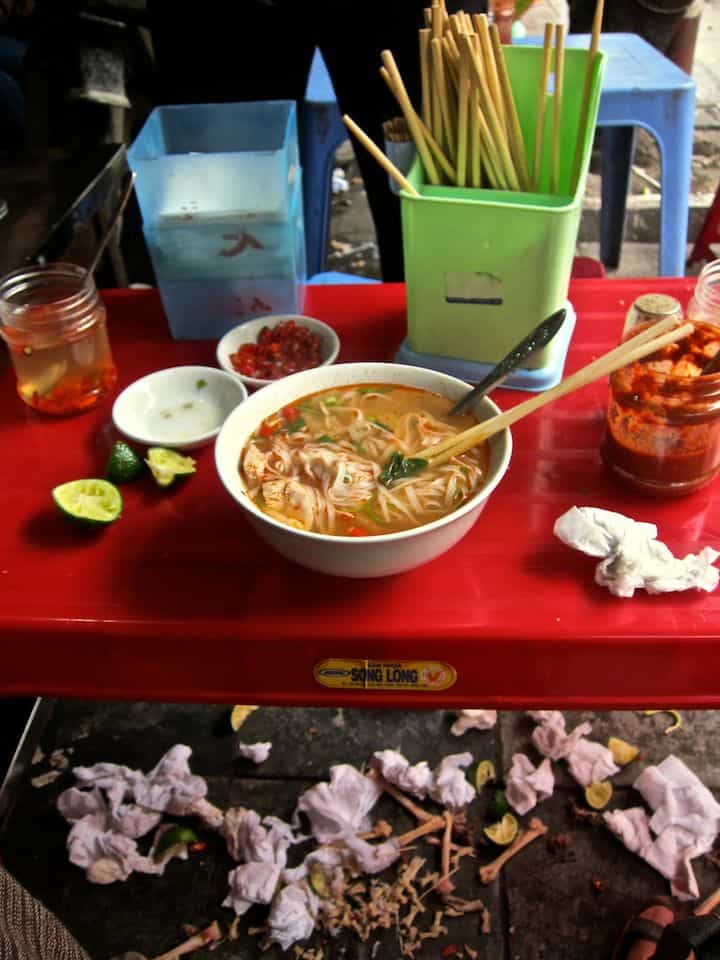 Pho ga — a staple of Vietnamese cuisine. I discovered it's okay to throw your trash down there!

Eventually noticing that nearly everyone seemed to be slurping bowls of noodles from innumerable tiny restaurants with glowing signs advertising something referred to as pho, I took a seat in one of the miniature street-side plastic chairs, nestled up to a laughably small table and ordered my first steaming bowl of pho ga--a staple of Vietnamese cuisine. This tasty chicken broth-based noodle soup is most often prepared with chunks of chicken and a tangy, spicy mixture of red chile flakes, cilantro and lime. Scooting my feet under the table I suddenly found myself ankle-deep in discarded napkins and bare chicken bones. Yet another surprise on this morning of new experiences, I discovered that it is perfectly acceptable to simply pitch rubbish under the table, where it will remain until it is later swept away by one of the restaurant employees. When the pho ga arrived I added some chiles, a splash of what I later discovered to be fish sauce from a nondescript bottle and a bit of lime, as I had observed many others do. The resulting concoction was surprisingly delightful--salty, sweet, spicy, tangy. A far cry from what I had been craving earlier, but also strangely satisfying, even early in the morning on an empty stomach. 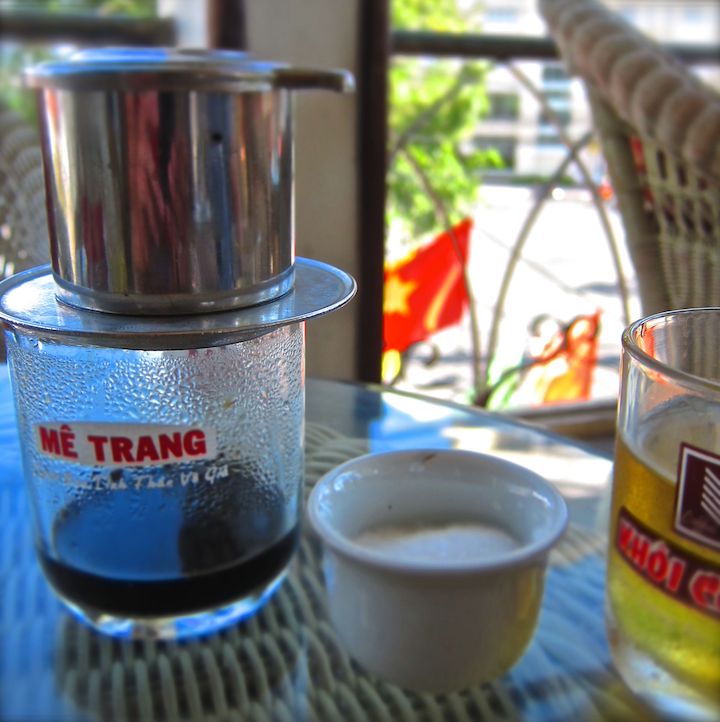 After finishing off a second bowl of pho ga, I needed a cup of coffee, so retreating to the tranquil solitude of a local coffee shop I ordered a traditional ca phe me trang. Though the portion sizes are relatively tiny, this particularly pungent blend is quite strong and certainly meant to be sipped and enjoyed slowly. Much care has gone into each tiny cup of brew, as often the shop owner has risen by 3 a.m. to begin the preparation process, which is all the more reason to take the time to slowly enjoy the rich, nutty roasted cup of joe. And on a particularly hot day one should opt for a ca phe da, which is an iced version of the robust beverage. I downed two cups of high octane jet fuel then set off on one of my favorite pastimes--exploring Asian markets with camera in hand. For me, Asian markets are a sensory experience and one that never fails to entertain, with many of the ingredients for your meal in their natural, uncooked and often living and breathing form.

Exploring the Asian market in Hue

After spending a couple of hours perusing the seemingly endless market it was time for lunch, and as I walked back to my accommodation I stumbled across a street vendor serving up banh mi--traditional Vietnamese sandwiches on freshly baked French baguettes and consisting of various fillings, most commonly caramelized pork belly. I opted for fried eggs on mine, which was a delicious decision as it was also topped with cilantro, fish sauce and chiles. For less than a buck each I wolfed down two and then, for good measure, topped off my morning of culinary exploration with one more bowl of pho ga before retiring to my room for some much needed rest.

The cuisine of a country says a lot about the culture, and the cuisine of Vietnam, much like the landscape, varies throughout its regions. As you move south from Hanoi to Hue, the staple meal changes from pho ga to another tasty noodle-based recipe called bun bo Hue. This spicy, savory dish is often served with tender beef and topped with crisp lettuce greens, peanuts, chiles, lime and cilantro, and was easily my favorite street fare in Vietnam. Hue is renowned for its particularly spicy dishes and this one is no exception. Red pepper flakes, chiles and paprika lend the spice, while lemongrass, scallions and fish sauce give this noodle dish a distinct zest. 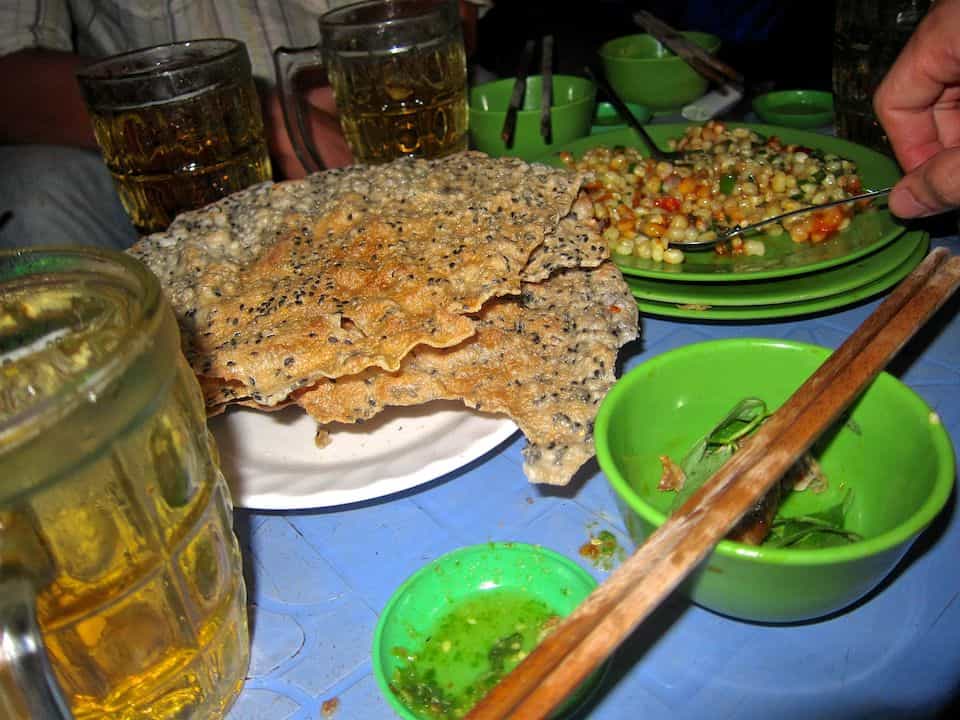 When it comes to pub fare, Vietnam has its own spin on many of the savory snacks, as I had the pleasure of discovering during a night of knocking back beers with the locals in the beach town of Nha Trang. Plate after plate of peculiar Vietnamese bar food was delivered to our table. Fresh hand-made spring rolls and crispy golden-brown egg rolls. An entirely intact fried fish. Crispy frog legs on a bed of lettuce. Grilled chicken feet. Corn salad with green onions, red chiles and topped with hot sauce was served with a plate of crispy rice cakes. Each dish was delicious and went down well with a glass of Tiger beer over ice, as it is commonly served. 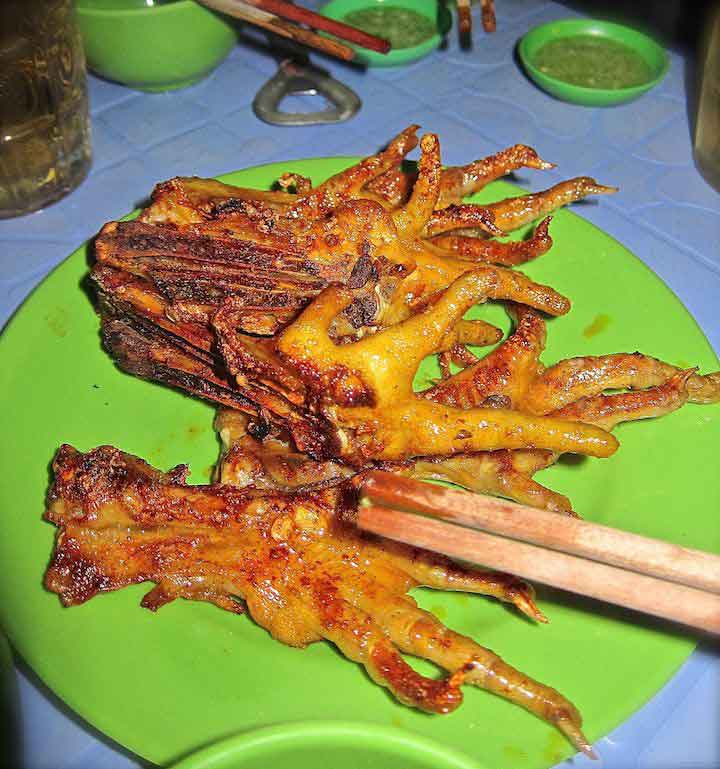 As you can see, the cuisine of Vietnam is remarkably unique and diverse. Whether you're visiting Vietnam or at your local Vietnamese restaurant, there are always many more beautiful, fascinating things to learn about this charming country, and I suggest that you approach it (as with any place) with an open mind and an empty belly.

I love this blog post. A man after my own heart! Chow down and Cycle On!!
Thanks, Melissa! I like your style.

The best part of bike touring? Eating whatever you want!
What a great sense of adventure AND appetite - bravo! Thanks for the primer on Vietnamese cuisine - I'm looking forward to tasting it first hand!
What do vegetarians do ?
Hi Dorothy--The cuisine of Vietnam is remarkably unique and diverse, with plenty of options for vegetarians. If you travel with Backroads, we do our best to accommodate your dietary preferences by making preparations ahead of time. When traveling on your own, you may be surprised how many vegetarian restaurants there are (catered to Buddhists) and how open vendors are to modifying their dishes upon request. Also, fresh fruit is plentiful here! Happy Travels.
Top