During my time in Tuscany, I led the Backroads biking trip several times but I have never had the feeling I was repeating something. I just love being with people and getting to know their stories: that's the main reason why I applied for this job in the first place and that's also why every trip is so unique. 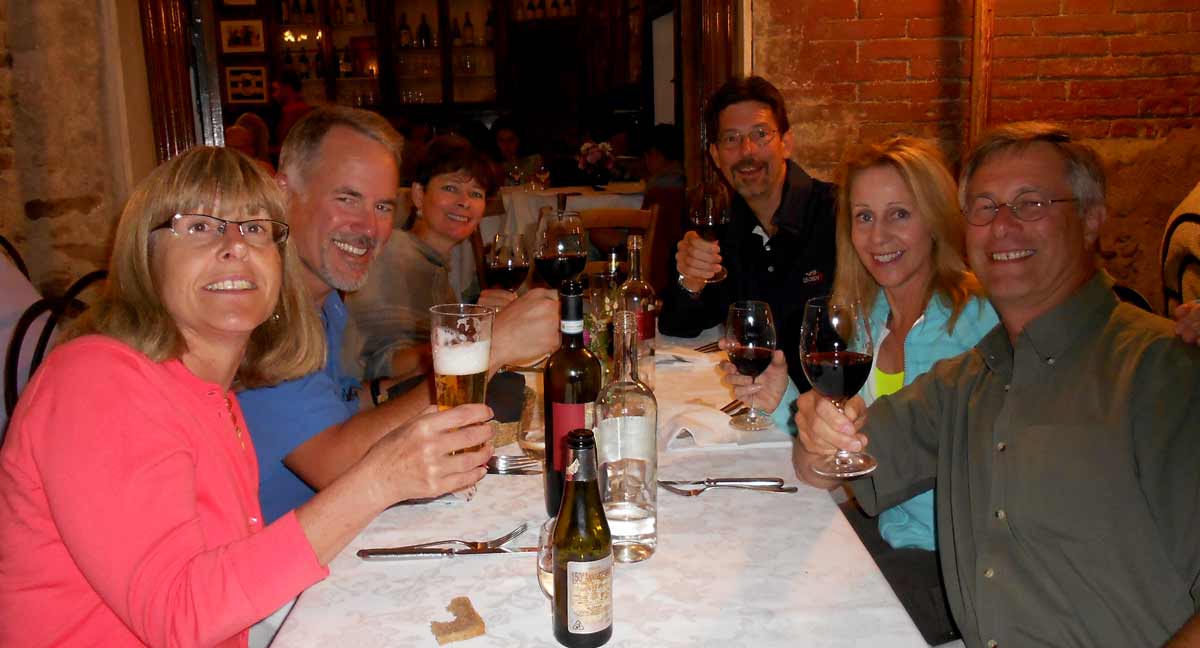 As it always happens with interpersonal relationships, there are times you just get along with somebody extremely easily and quickly, and today I would like to introduce you to one of the craziest and most enjoyable groups I had the chance to meet in my past season. They are called the Rhode Rash team, and you will soon realize where this name originates from. Their names are Gordon and Wendy Hoover, and Lisa and Andrew Robinson. The two couples are friends who come from Rhode Island and they entered my life last year on a trip I led with two very close co-leaders and friends, Mike Giusti (called Juice) and Miss Holland. 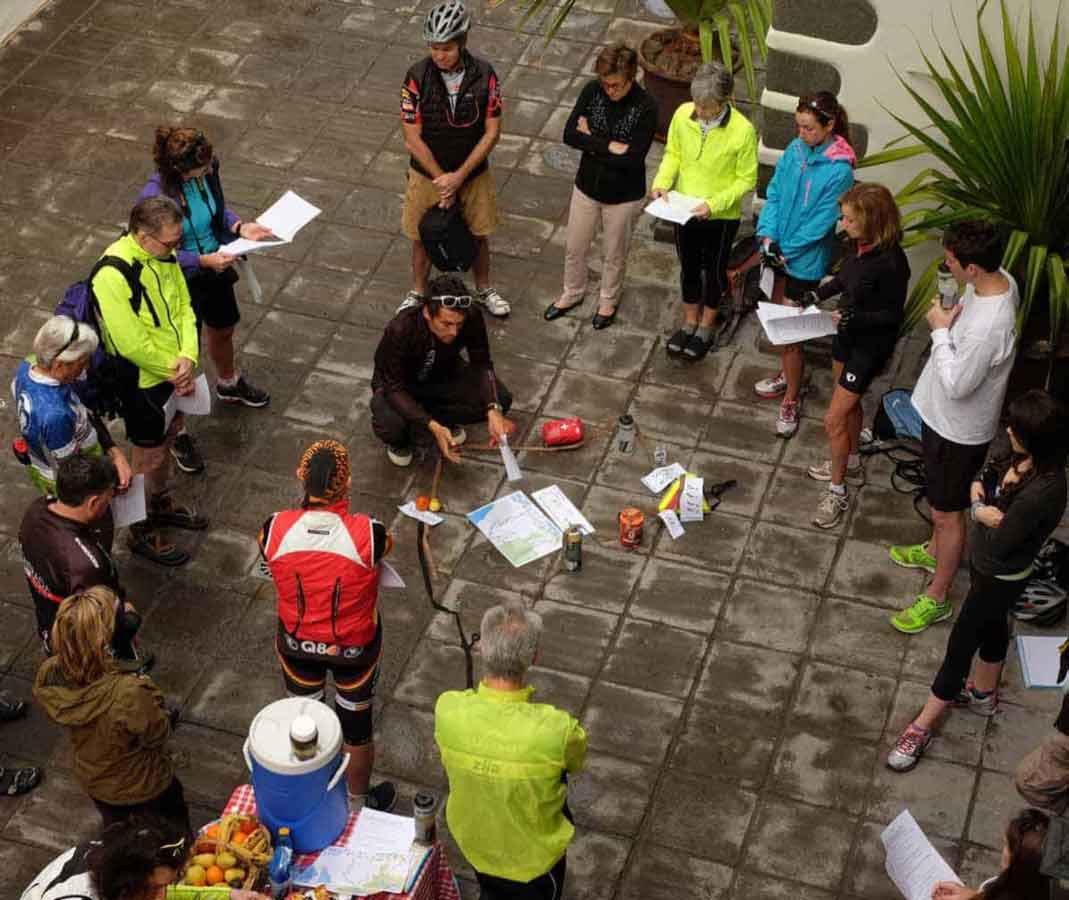 This is what a typical Backroads "Rout Rap" looks like

If you have ever taken a trip with Backroads, you know that there is a very important moment every morning: the so-called "route rap." It's an overview, given by the leaders, of the events of the day: we look at the elevation profile together, we go through all the possible riding options (and sometimes we have A LOT!), we give some cultural highlights of the area and we explain the logistics of the day. In other words, it's a key moment of the day: if guests follow the route rap, any possible doubts are removed before they even arise. Of course, a basic requirement is to follow what leaders say during the route rap. My dear friends and guests mentioned above never ever listened to one minute of a route rap. I would call Gordon the head of this group of ungovernable--but lovely--guests, and if I close my eyes I can still see them in their goofy poses walking down the staircase of a charming countryside hotel, grabbing a copy of their directions and starting to laugh, playing among themselves and making jokes with other guests--distracting them too, of course! And then, after no more than one minute after the talk, they would come to either Juice or me, asking questions that would have been answered if only they had listened to the talk. The fact is that Gordon is so much fun that I couldn't even get bothered by that. He just made me laugh all the time, as he did with his friends. 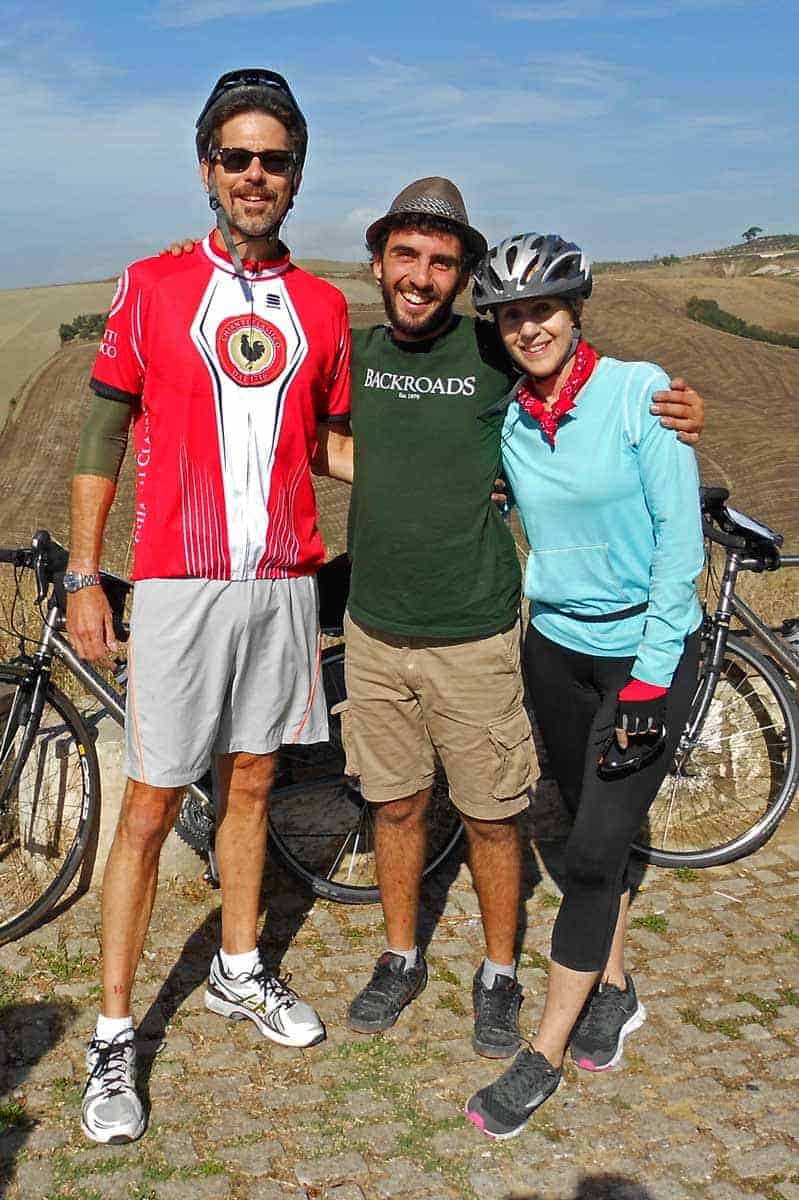 With Gordon and Wendy, some of my most memorable guests

They cared so little about the route rap that they didn't even bother to remember its real name. Gordon would come to me and say, "What did you guys say at the...at the...at the...road rash?" every single morning. I kept in touch with Gordon throughout the whole winter and eventually he started calling himself "proud member of Rhode Rash team," mixing up the place the group comes from and the original name of the Backroads morning event. That's how the name originated. Getting to know the group a little bit more, I discovered that Gordon and Wendy met in Dallas, in a very unconventional circumstance. Both of them were passionate about country music, and they both were in the same bar on a Ladies Night, right when they were having a "tight jeans contest." The contest was about having women judging cowboys in their tight jeans. Well, Gordon wasn't really a cowboy type of guy, but he just gave the contest a try and indeed he was lucky! Wendy was a member of the jury and just couldn't help falling in love with Gordon's moves. How crazy, right?! The story of how Andrew and Lisa met has a more intellectual twist. Both of them were working at a hospital in Cambridge, Massachusetts. Andrew was working as a pharmacist and Lisa approached the pharmacy window to say hello to a colleague of Andrew's. The pharmacy window had the top part open and the bottom part closed--and Andrew could just see the top part of Lisa's body. As the colleague asked her to come in, she opened up the bottom part of the door and...bingo! (I am quoting here.) Andrew was hooked. 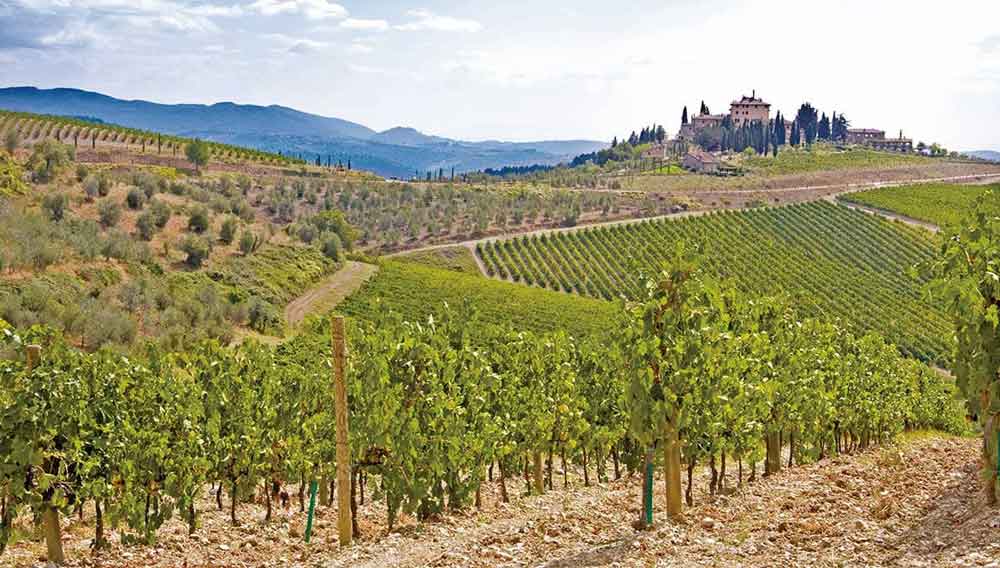 The four Rhode Rash Team members met while walking their dogs, and they soon realized they had a lot in common. They all like being active, they love traveling and they all have a brilliant sense of humor. Last year's trip was the first time they were taking a holiday together, but they will surely repeat the experience. Lisa recently retired, so she is keeping the Hoovers occupied with a whole bunch of sparkling initiatives. It seems that Backroads was the catalyst for new members of the team, too: Steve and Linda, a Canadian couple they met in Tuscany during our biking trip. They just invited the Hoovers to Calgary to attend the Calgary Stampede, the world's largest rodeo. The Rhode Rash Team is expanding, and I am seriously wishing good luck to my dear colleagues that will have the pleasure - and the challenge - to lead this shiny happy group of hilarious guests on any future trip. 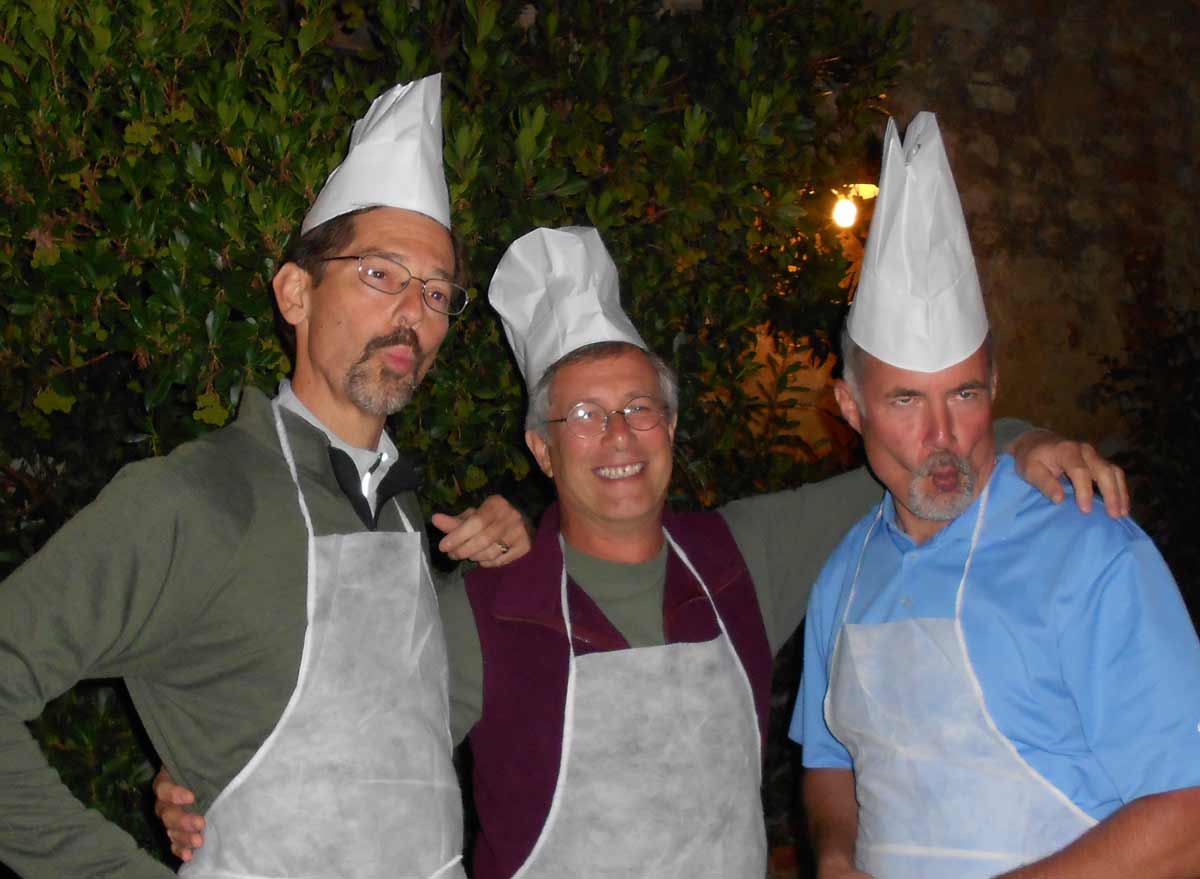 Love these posts. Can't wait to meet you on May 11, Alessandro, when we will join your group for a week through Tuscany. We'll leave BC, Canada on May 6 and tour a couple of days in Rome before taking the train up to Florence on May 10 to be ready for the trip the next morning! Ciao
Hello!! I am so looking forward to meeting you on trip!! I am thrilled and excited about the fact it will be me showing you Tuscany around. It's an honor! Can't wait to get to know you!
My co-leader and I will do our best to make your holiday unforgettable! See you very soon in Tuscany, Berkeley! Ciao!
Wonderful piece Alessandro! Although I would have liked more character development for Juice and Miss Holland...We are lucky to meet new shiny happy people like Team Rhode Rash all the time! But no one is as shiny and happy as you, Ale!
Oh, Jane, you are a sweetheart!
It was really sad not to get more in deep with Mr.Juice and Miss Holland, but I really needed to get more in deep with the sparkling personality of these awesome guests!
To get to describe Mr.Juice and Miss Holland, I would need a full server to store all I have to tell about them!
Well, I'm blushing all the way over here in Salt Lake City. These guests certainly did deserve their own post! What a fun group! However, Giusti and I will be expecting that server-size article on us very soon... :)