Floating atop the crystal clear waters of the Adriatic Sea, a 110-year-old wooden masterpiece named Bozidar, meaning "God's gift," awaits our arrival. As we finish our hike through charming coastal villages, centuries-old olive groves and secluded bays, the rocky trail conveniently ends at a small dock where Bozidar's dingy picks us up to whisk us out to our group's private boat for the week. 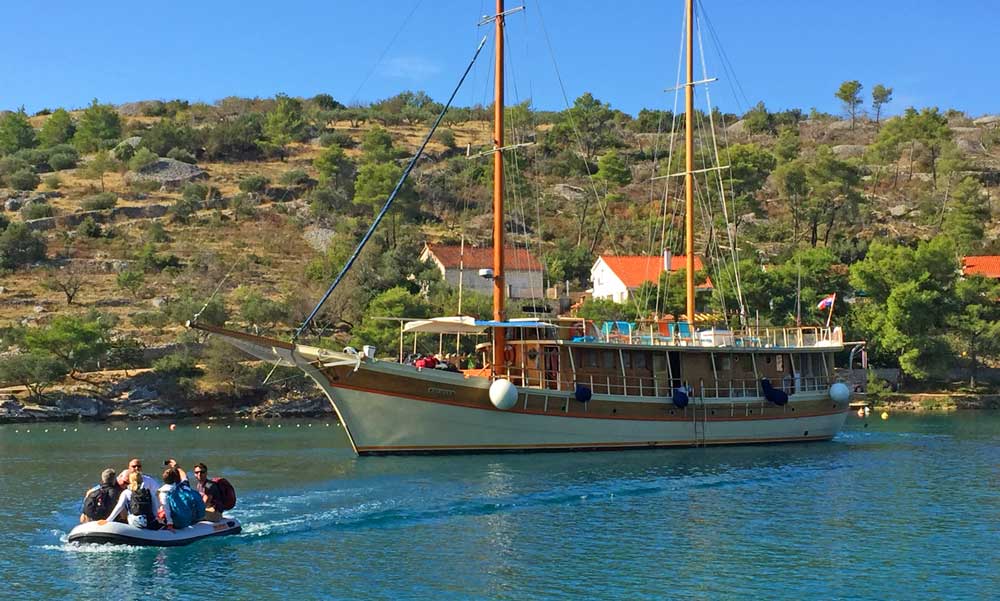 Onboard we slip into our bathing suits, take a refreshing post-hike dip, then relax on the upper deck and bask in the warm rays of this sunny coastal scene. Next, a freshly prepared lunch is served to us by Bozidar's delightful crew. The meal includes locally caught seafood, pastas, garden salads, vine-ripened fruits. To wash it all down, consider a glass of  wine from a family-owned vineyard. Or perhaps a cold Karlovačko or Ožujsko beer? 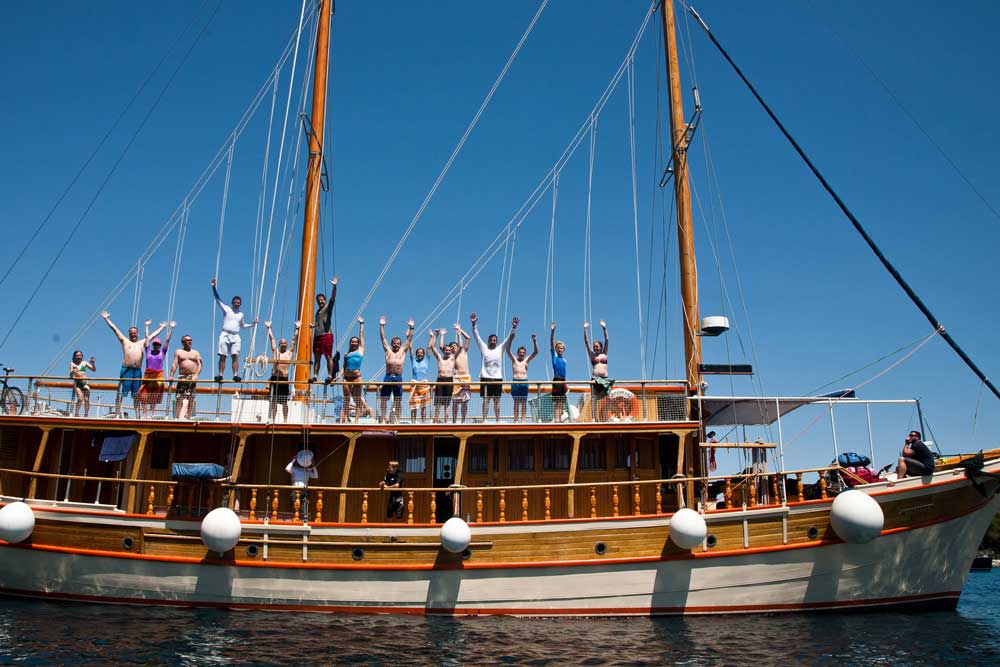 Much more than just our private boat for our tour along the Dalmatian Coast, the Bozidar offers a glimpse into a recent chapter of maritime history. The ship was constructed by Italian builders in 1907 as a traditional vessel for the sea transport of wine, fruit and vegetables between the Adriatic's coastal cities and northern Africa. During both WWI and WWII, the boat was intentionally sunk--but only temporarily--to protect it from being commandeered by the military and likely destroyed in battle. In the 1970's, the boat had to be sawed in half and shortened by 4 meters in order to meet communist-era regulations that all boats must be under 20 meters in length.  Following the end of communist rule and the breakup of former Yugoslavia, the Bozidar has been restored to its previous 24 meters and all of its original splendor. 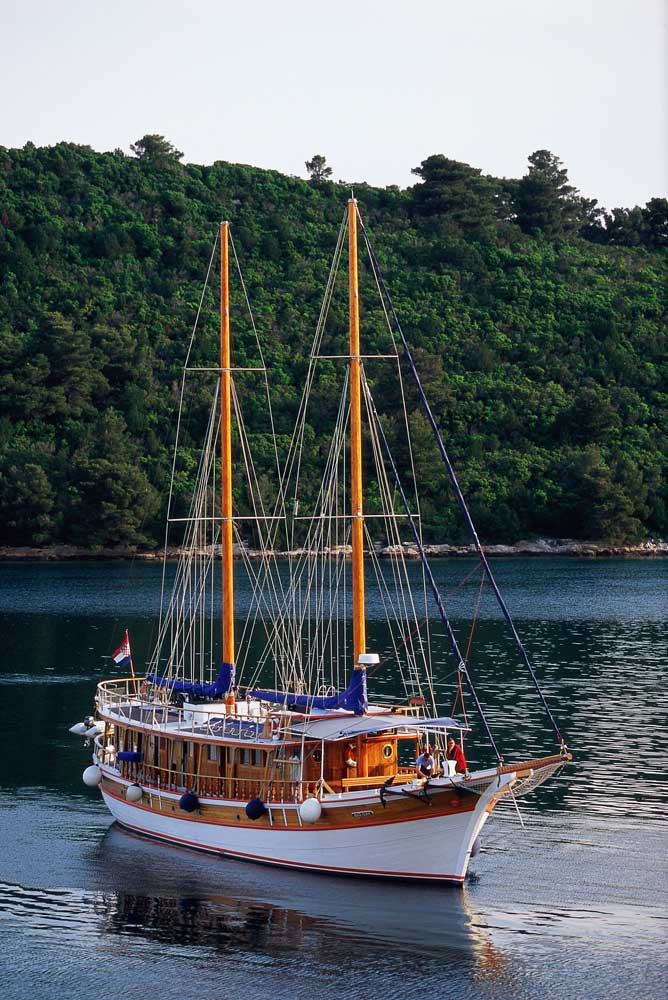 Today, Bozidar spends its days at sea taking Backroads guests to and from the many islands that dot Croatia's sparkling coast. Its daily itinerary may involve a pick-up in the busy harbor of Spit, a drop-off in the Marco Polo's supposed birth place of Korčula or a cruise along the coastal waters of Orebić, a historic town made famous for its shipbuilding industry...all while basking in the warm sunshine of the Adriatic Sea. The Bozidar's unique story is just one small part of Croatia's great history of seafaring, ship building and trading that has been thriving in these waters for thousands of years. In 2008, in a cove just south of the border between Croatia and Slovenia, fishermen found a boat that was determined to be a very rare find--a Bronze Age vessel made of wood and sewn together using ropes, roots and willow branches. Marine archaeologists and researchers later determined that this boat dated back to 1200 BC! The Romans are admired for the development of early maritime practices throughout the greater Mediterranean. They spent a considerable amount of time on the water, cruising the Adriatic, experimenting with ship building techniques and developing deep harbors in key locations along the Croatian coast. They built palaces and summer homes in places like Split, a bustling port city built up around the Roman Emperor Diocletian's Palace. The Romans also initiated important trade routes between Europe, Africa and Asia. A Roman merchant ship's main function was to transport cargo, specifically agricultural goods (olive oil, wine and grains) as well as raw materials (marble, copper iron and other heavy metals) over long distances with minimal cost. The type of ship commonly used by the Romans was called a corbita, a massive vessel capable of carrying over 400 tons of cargo. Onboard the ship, amphorae --airtight terracotta containers characterized by a narrow neck and two carrying handles--held both liquid and dry gods for sale or transport. Maritime archaeologists have discovered shipwrecks off the coast of Croatia containing amphorae so well-preserved that the original content is still present. Roman warships were built to fighting off enemies and to assist merchant ships in their efforts to fend off pirates. These early beginnings of building up coastal cities and establishing sea trade were followed by thousands of years of various cultures fighting over this geographically strategic and resource-rich area. Most significantly, the migration of the Slavic people to the south, the powerful Venetian influence and the rule of the Austrian-Hungarian monarchy led to a diverse mix of cultures here. It's a fascinating history that offers much to discover for today's visitors. 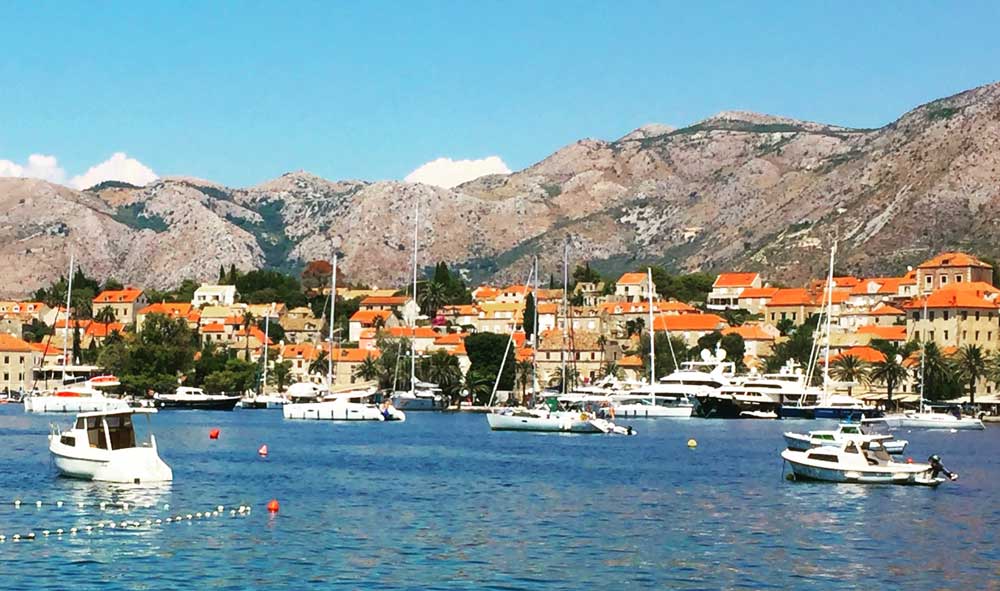 Today, Croatia has a flourishing modern-day boating and yachting culture in the Adriatic Sea. With international tourism gaining significant momentum here, it's no surprise that Croatians are now leveraging their boating history into tourism opportunities for visitors. Boat owners are tranforming their historic vessels into modern cruisers. Luxury yachts and impressive cruise boats contribute to fun, bustling port cities. Traditional fishermen still go out in the early mornings to catch fresh seafood served in coastal restaurants. A well-designed ferry system transports tourists between the islands. Jet ski rentals, windsurfers and small boat tours make for a lively scene just off shore while secluded coves still offer serenity and solitude. Regardless of how you enjoy the Dalmatian Coast, you're sure to achieve what the Croatians seem to strive for: pure enjoyment of life by the sea.

Want to sail with us aboard the Bozidar? 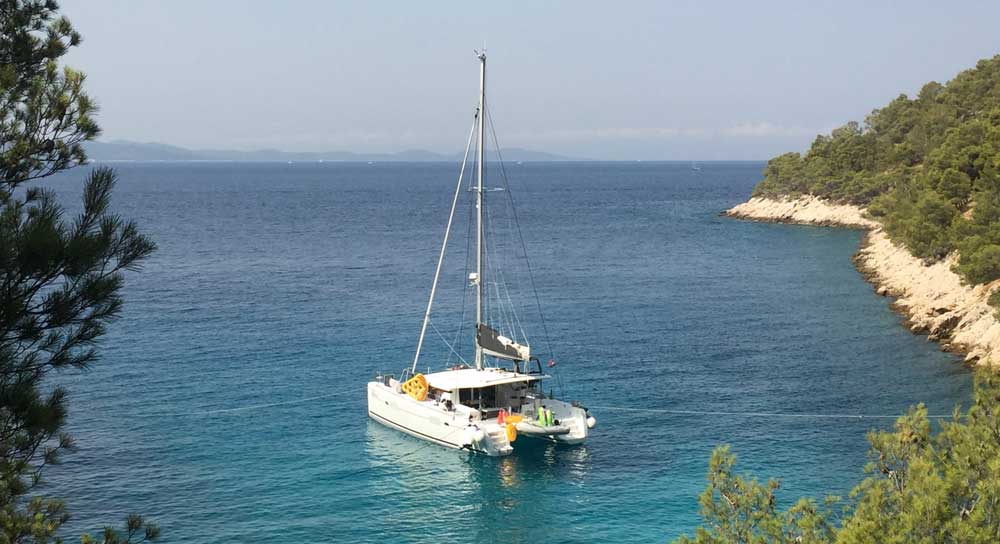 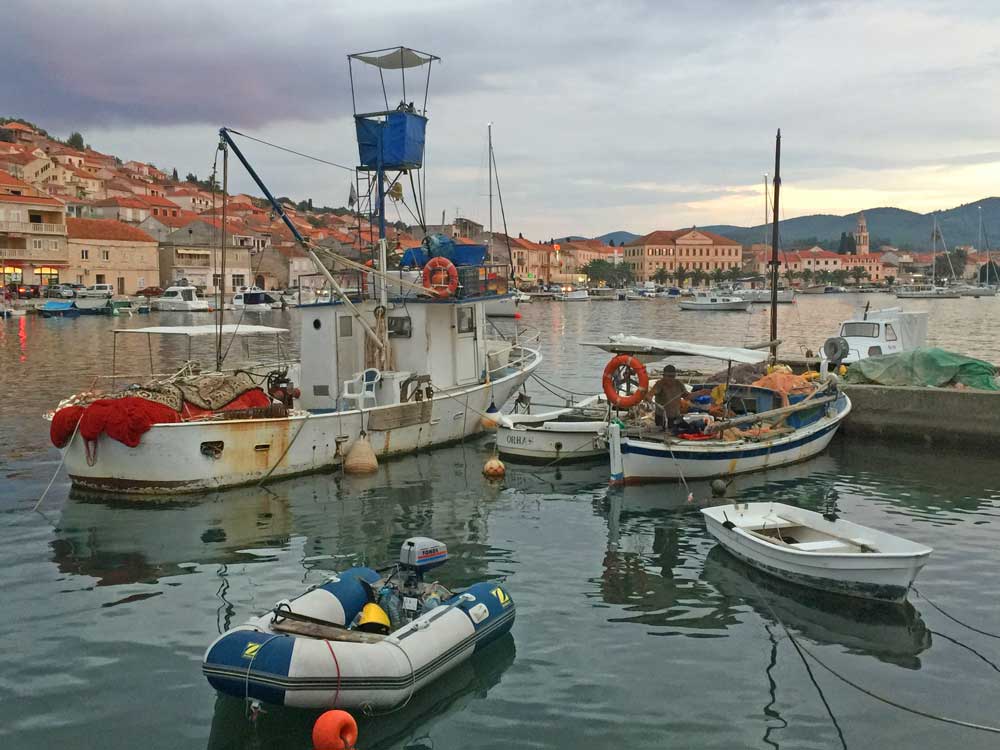 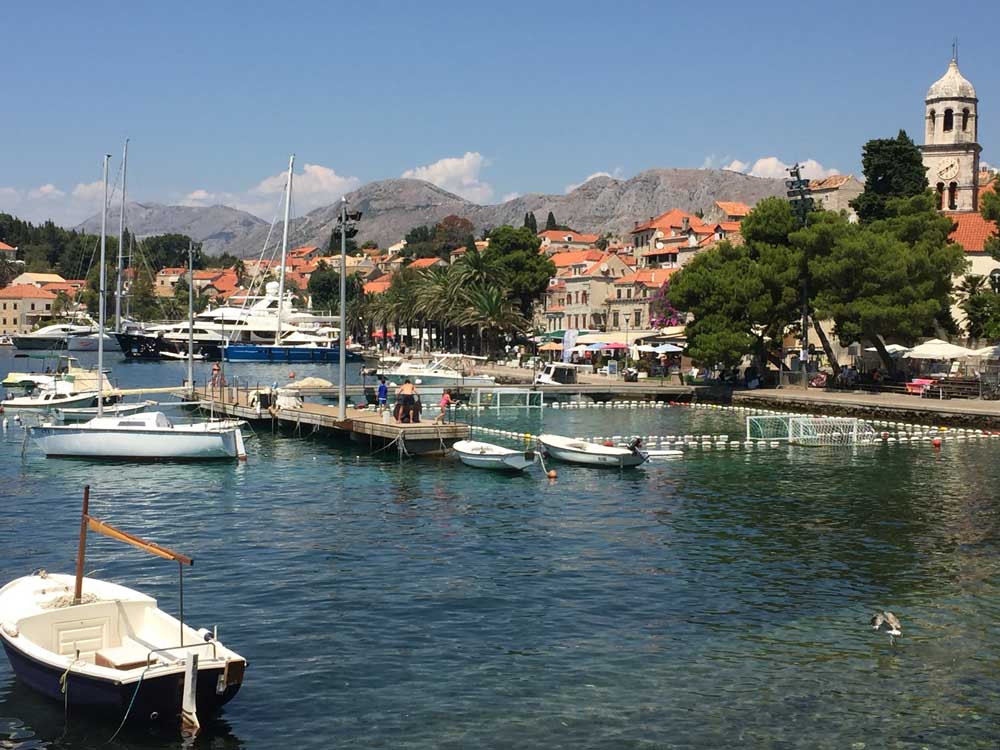 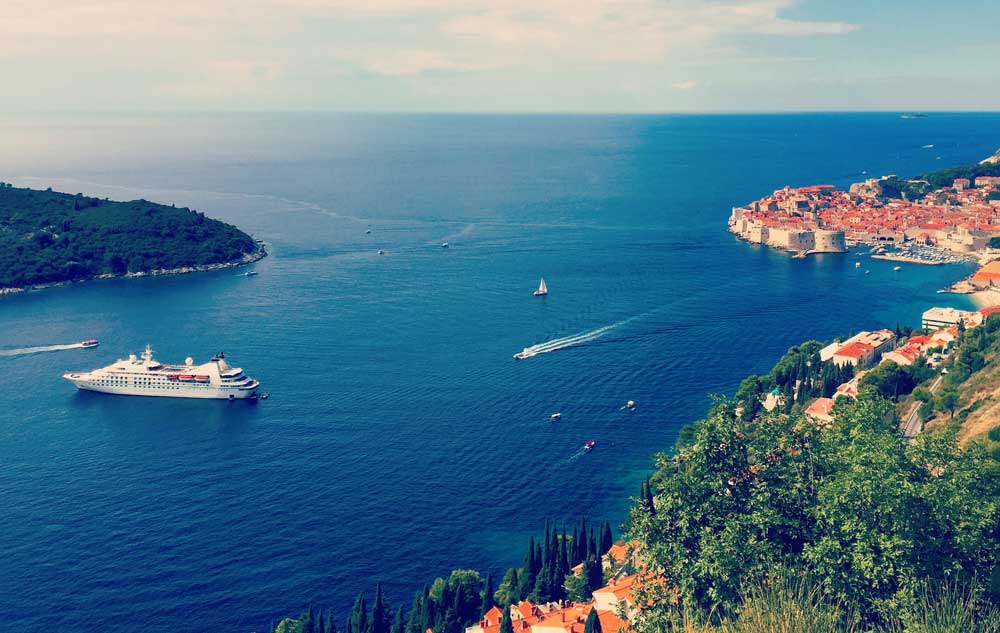 Looks and sounds great! I wish there was some hands on learning about the sailing of the ship.
Top