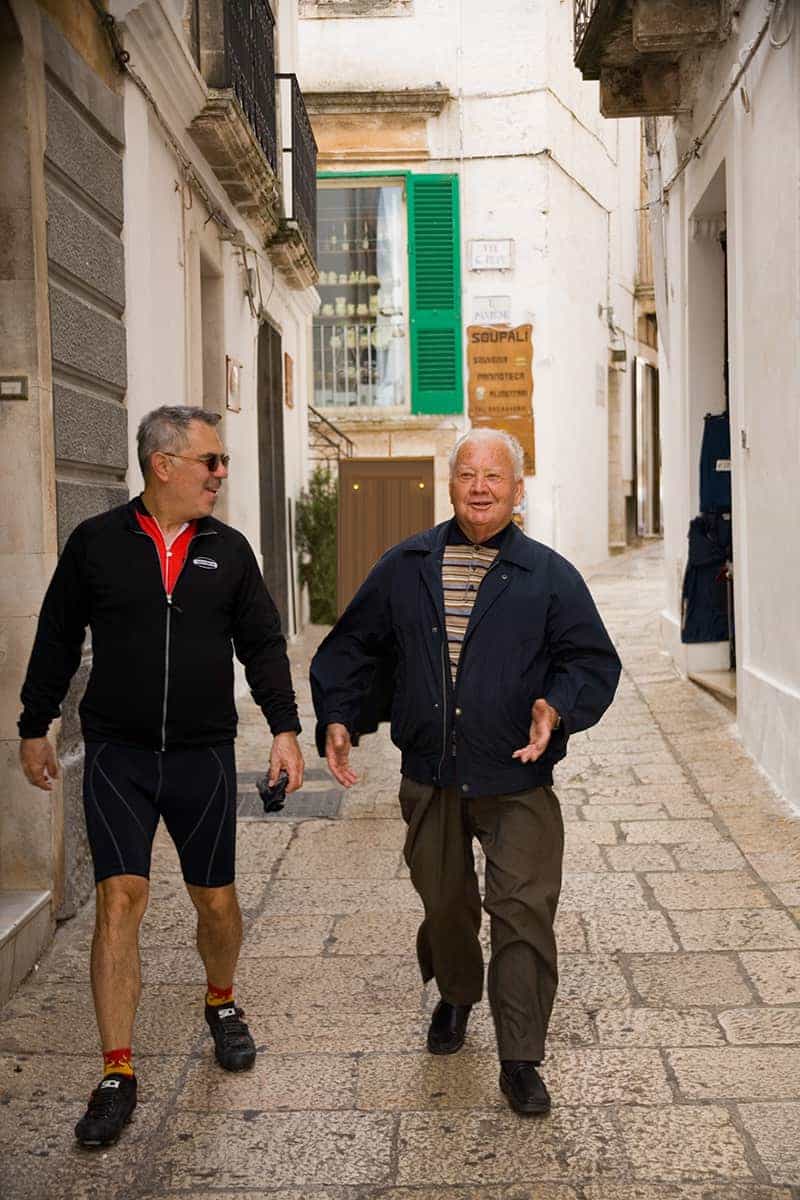 One of the best parts of a Backroads trip is the connection with a place and its locals, and one of the best parts of being a Backroads leader is creating our own connections and facilitating them for our guests. At the beginning of my first season leading trips in Italy, I was unsure about my ability to provide this connection. I had thought I would need an Italian-style résumé thick with a list of contacts within seven degrees of Silvio Berlusconi. But, it turned it out that my best assets were a keen eye, a smiling face, and a few kind words in the native tongue. Not to mention, following the heed of my curious, wide-eyed guests made it possible for me to relive the joy and awe of discovering la bella vita for the first time with each new trip. Although I worked in four different Italian regions that first season, the meaningful connections I made with locals was strongest for me in Puglia, the agricultural southern region that is teeming with of old-world charm. My first few trips in Puglia took place in May, when the trees were full of ripe scarlet cherries and the ground was thick with verdant spring vegetables. Guests asked about the etiquette of tasting the wares and I judiciously instructed them that the low hanging fruit within reach from the seat of a bicycle was fair game. This seemed like solid advice, but, honestly, I wasn't exactly sure just how protective the locals might be. I kept my eyes peeled for guard dogs and crotchety old men wielding shotguns.

But then, while on a ride through the countryside, two of my guests approached me, all smiles and breathless. We were stopped in front of a field and the two sisters, finishing each other's sentences, took in our surroundings. "What's growing here in the..." one began, "they're sweet peas!" the other exclaimed. I encouraged their curiosity and we dismounted our bikes to confirm our assessment with a closer examination (read: tasting). As we reached for the peas, I caught a farmer approaching us out of the corner of my eye and all three of us straightened up, guilty of being caught in the act. With my heart beating fast, in anticipation of reproach, the farmer greeted us with a deeply tanned, smiling face and outstretched, cupped hands overflowing with peas for us. I thanked him, the sisters chiming in with chirpy "grazie!", and explained what we were doing there, as he had assumed we might be part of the Giro d'Italia race. 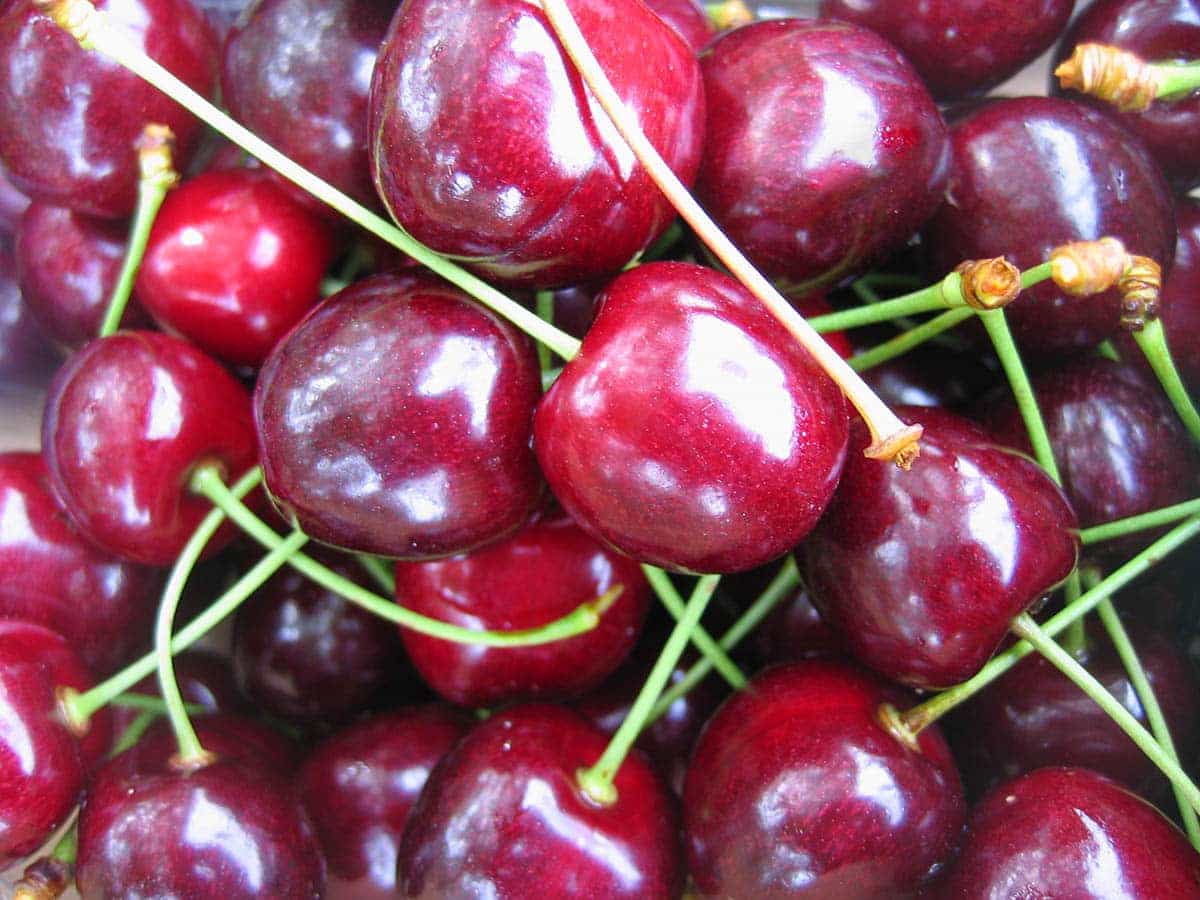 At that very moment, putting one of the sweet peas in my mouth, a tractor stopped in the middle of the road, in between a gaggle of guests now stopping to catch their breath. The tractor had a large scoop attachment on the front that was filled to the brim with plump, ruby cherries. As the guests looked on, salivating (both from anticipation of eating the cherries and exhaustion from the climb), the elderly tweed-capped farmer motioned to the scoop of bounty and heartily shouted at me "prendetele!" The guests snapped their heads in my direction, eager for a translation. "He told us to take some!" I said, as I bent down for a modest handful. "Grazie...!" I began to thank the farmer when he interrupted me and dismounted his tractor. "No! PRENDELE! Ancora!" he insisted I take even more and began to unload generous handfuls straight into the hammock I had created with the upturned bottom of my jersey. 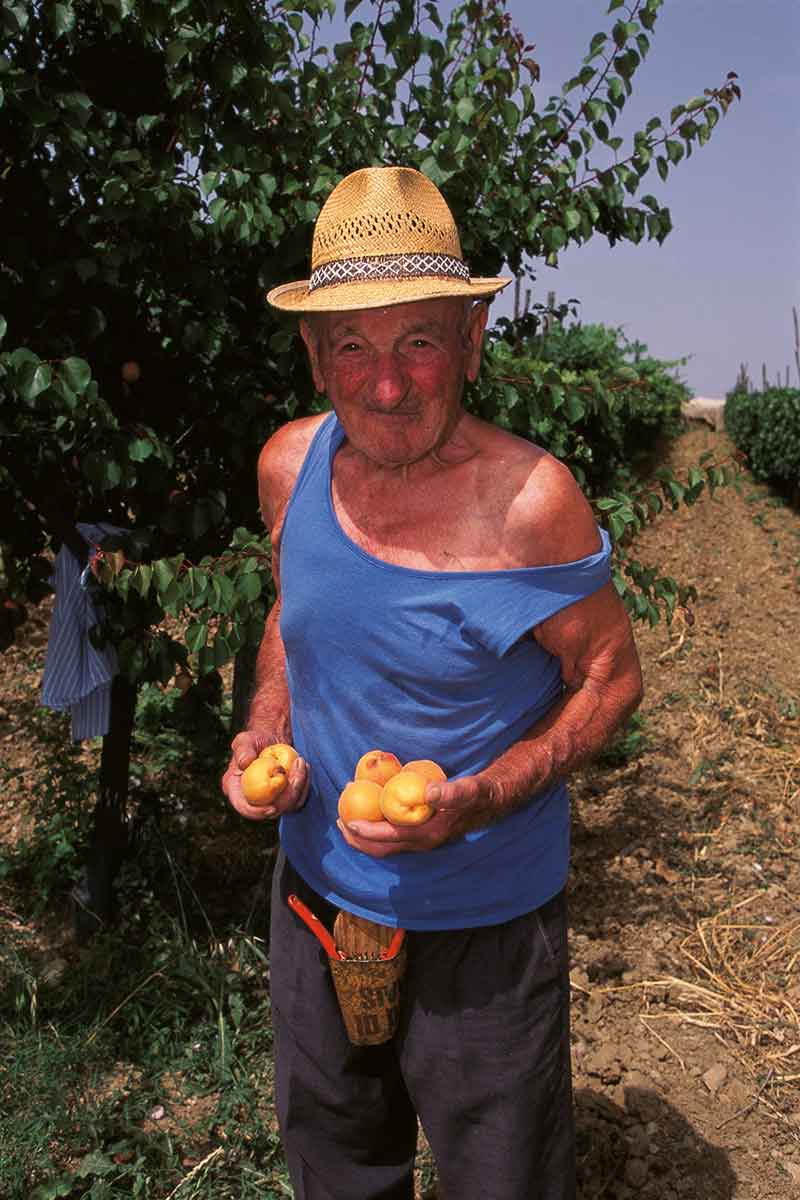 Long after the cherries had gone, in late October, I led my final trip of my first season with Backroads. I rode with a group through Savelletri, the tiny seaside town where I lived in the leader house while leading in Puglia. Stopping briefly to explain the final options of the afternoon ride, a guest asked "what is she doing?" as he pointed to an elderly woman sitting on a chair in the small paved square where farmers usually sold seasonal produce from their trucks. The woman delighted by our interest, told me she was making curtains, shaking out the pile of threads on her lap and gesturing to the building across the street where a finished product of her hand-tatted lace curtains hung in a window that I had walked by dozens of times before. 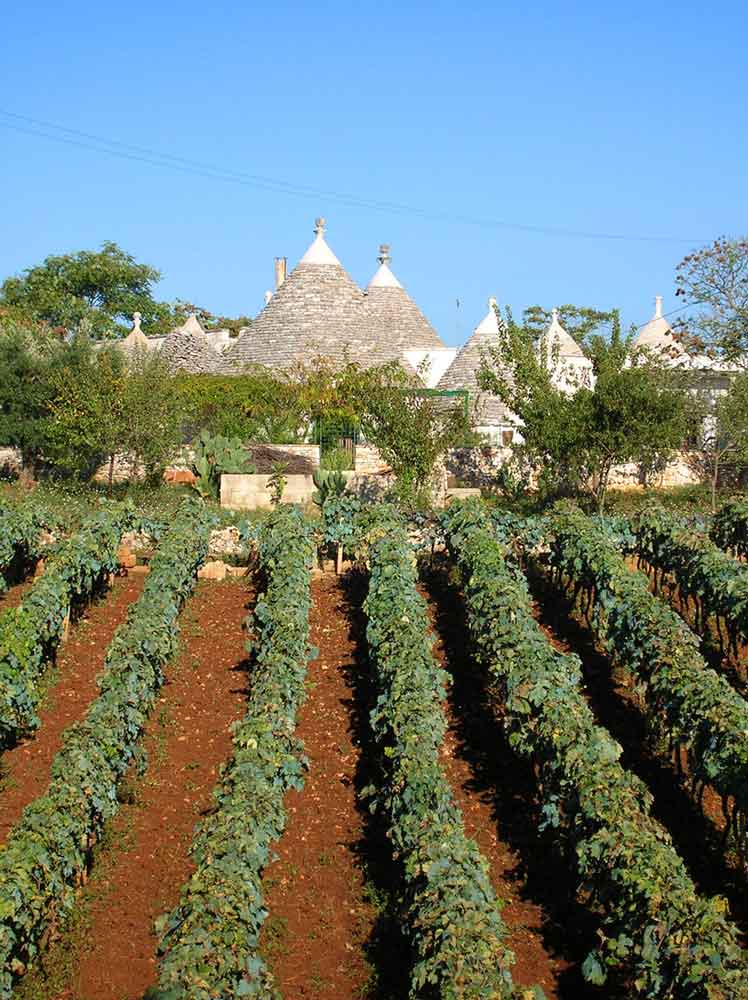 Vinyard with trulli buildings in Puglia

I told her that I had assumed she was mending fishing nets, as I often see the men of her generation congregating nearby to repair their fishing equipment. Lacework, in fact, has its roots in the netting and ropes of fishermen, she explained, as they would create decorative designs for their womenfolk back home. Admiring her handiwork, I was delighted by all she taught me with her stories, as were the guests, listening with baited breath as I translated her tales. As we said our goodbyes and started to ride off, the guests rhapsodized excitedly, wondering how many more charming encounters we could have during our trip. I smiled, wondering how many more I would have for weeks and years to come.

Great piece, Jane! Thanks for sharing some lovely experiences that you and your guests have had throughout Italy. I totally agree, connecting with the locals is one of the greatest surprises when traveling. And sharing that with others makes it even more special!
Thanks, Austin! Unexpected friendly encounters throughout the world is definitely one of the most life-reaffirming experiences possible and definitely something we get a lot of at Backroads :)
I can't wait to get back to Italy! May can't come soon enough!
Luiiigggiiiii! Italy is waiting for you with open arms!
Jane, I love your writing! I am a big fan of your posts. Looking forward to reading more!! :-)
Wow, the way you talk about Italy makes it seem a dreamy place!
Great piece!
Grazie, Ale! How could Italy NOT be a dreamy place full of 'storic centers' and 'che pizza!'!?
Let it also be noted that Jane's intelligence, likability and proficient language skills allow her to earn her special connections. Nice piece, keep it coming you Italian queen!
Mck! Don't make me blush ;) The same could be said for you bella amica mia!
Loved reading this, Jane! Great imagery. One of my favorite memories of working in Puglia is "chatting" in my limited Italian with a group of old men at the waterfront seafood restaurant in Savelletri. Somehow the convo ended with one of the men giving me his seasickness wristbands...

Looking forward to reading more about your Italian escapades!
Glad you enjoyed the read, Beth! The Pugliesi are definitely a friendly, entertaining, and sympathetic bunch! More Italian adventures are on their way :)
Top