25 Years After the Fall of the Wall

In late December I went for a walk with my wife and son to mark the 25th anniversary of the fall of the wall just outside our village. I grew up here, right along the border between East and West Germany. 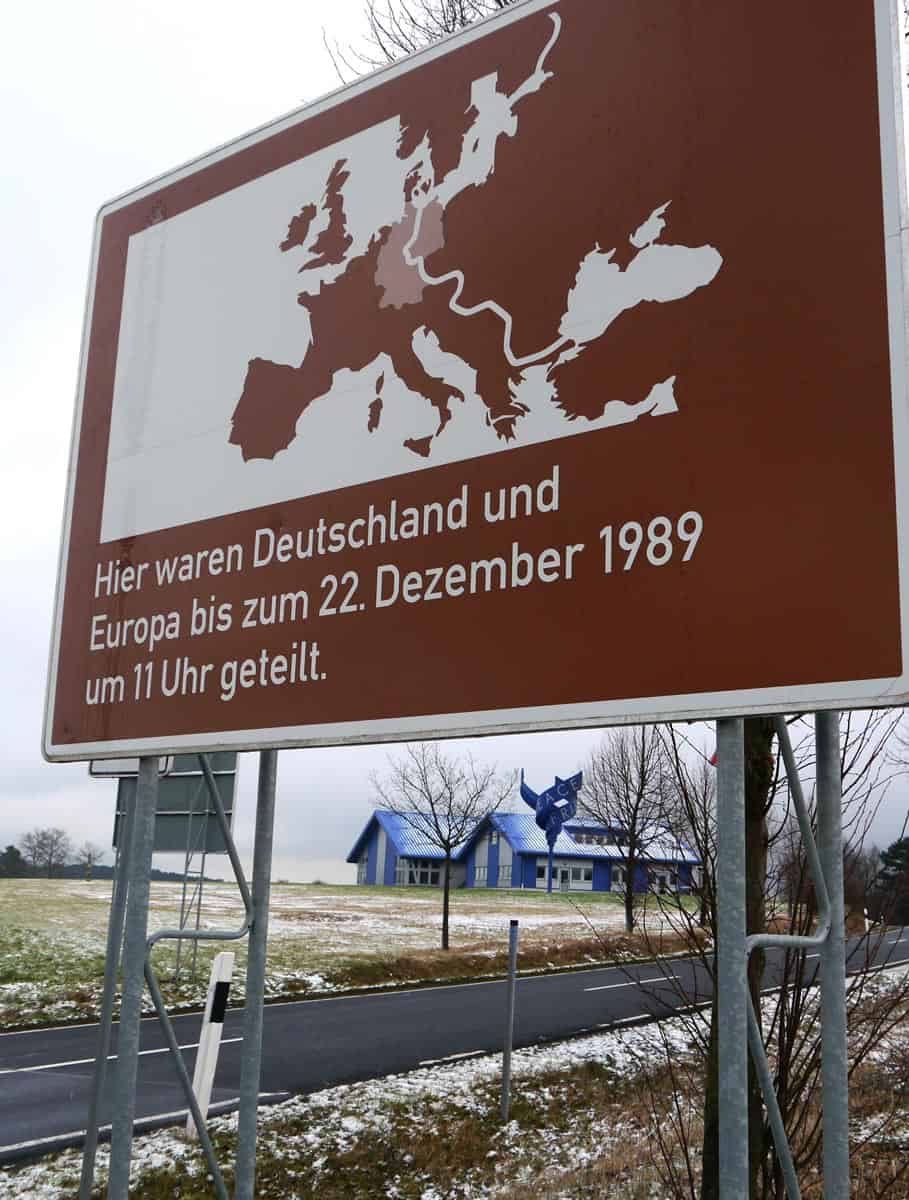 Here Germany and Europe were divided until December 22, 1989 at 11 o'clock

"But," you might be thinking, "the Wall fell on November 9th, 1989." And so it did, in Berlin. However, I live farther westward along the inner German border--the 870-mile double-barrier of steel mesh fencing, anti-personnel mines, barbed wire, watchtowers and dog runs. Here the opening began on December 22nd, 1989, with pedestrian-only access in just a few towns. Cars were allowed through in January of the next year, and the fencing itself didn't come down until much later. It was a significantly slower process for the rest of us than what was portrayed in the newscasts of Berlin. On our walk, my family and I headed to Point Alpha, a memorial and open-air museum about a mile from our home. It's a popular place for education as well as hiking. We're enthusiasts of both. Along the way, we pondered such questions as What would we be doing if the wall was still up? Would I be a physiotherapist as I was originally trained? Would I be married and have children? We certainly wouldn't have been able to meet--a Canadian girl and an East German boy--in Brazil, as we did. And Isn't it interesting that, with the whole world open to us, that we've chosen to come back here? 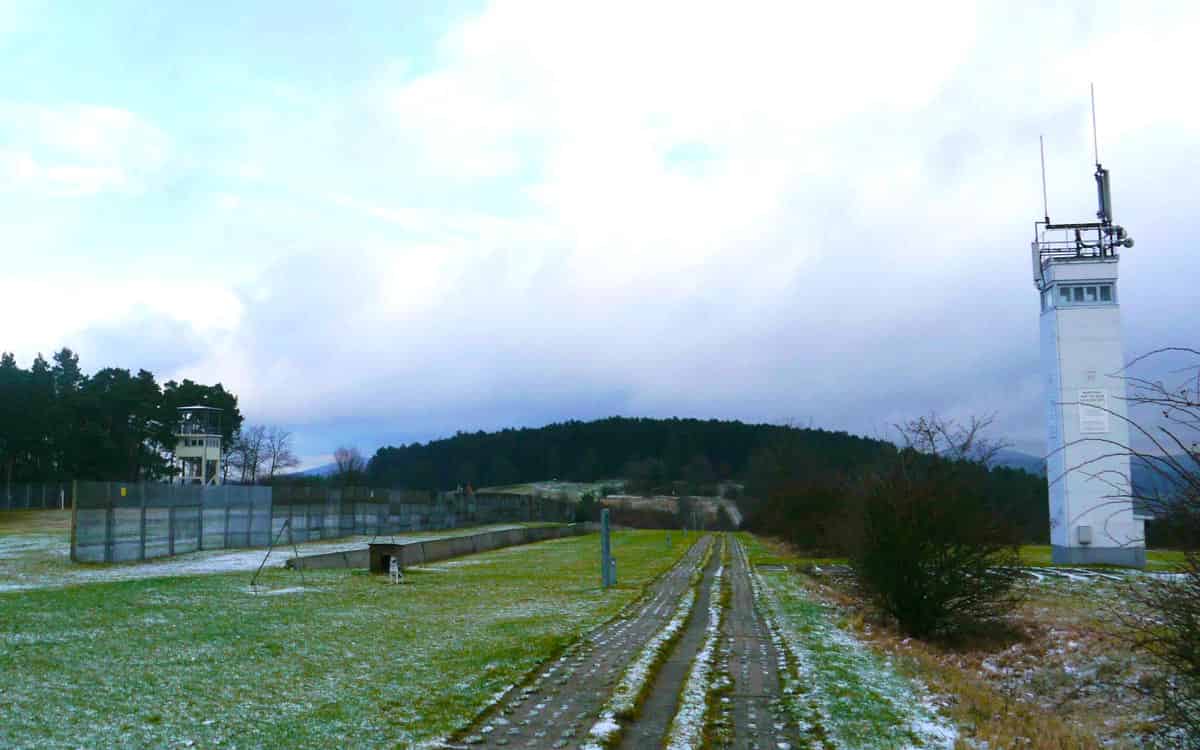 Remnants of the border East German watchtower on right, American tower on left

At Point Alpha we walked along both sides of the remaining fencing. My head was awhirl with memories and stories. When the border was drawn, it arbitrarily split families. My grandparents found themselves separated from half of their siblings who just happened to live a few miles farther west. Visits to the West were nearly impossible, required a lengthy application process and, as my grandma and dad later learned, involved a thorough Stasi background check. Although ostensibly constructed to protect us from the evils of imperialism, capitalism and the temptations of good chocolate, it was evident that the barrier was supposed to keep East Germans from leaving. Nonetheless, tens of thousands risked their lives attempting to flee, including two of my dad's cousins who escaped as young adults in 1987, only two years before the border opened. Knowing their stories--and many others like them--makes me appreciate the ease with which I can travel around Germany and the world. Point Alpha is about the past, but also about the present, and you can't help but feel positive about the future here. When we visited in the middle of winter, it was busy with rambunctious families and dog walkers. In the summer the parking lot is overflowing with museum-goers, cyclists, long-distance hikers and strollers. Elsewhere in Germany, similar trails and memorials have sprung up to help people learn about the past while enjoying the beautiful surrounding countryside. Our new Berlin to Prague Bike Tour abounds with such powerful markers of history coupled with scenic, easygoing biking. If you decide to visit, you may be as surprised as I am about the changes that have taken place in East Germany over the past 25 years. 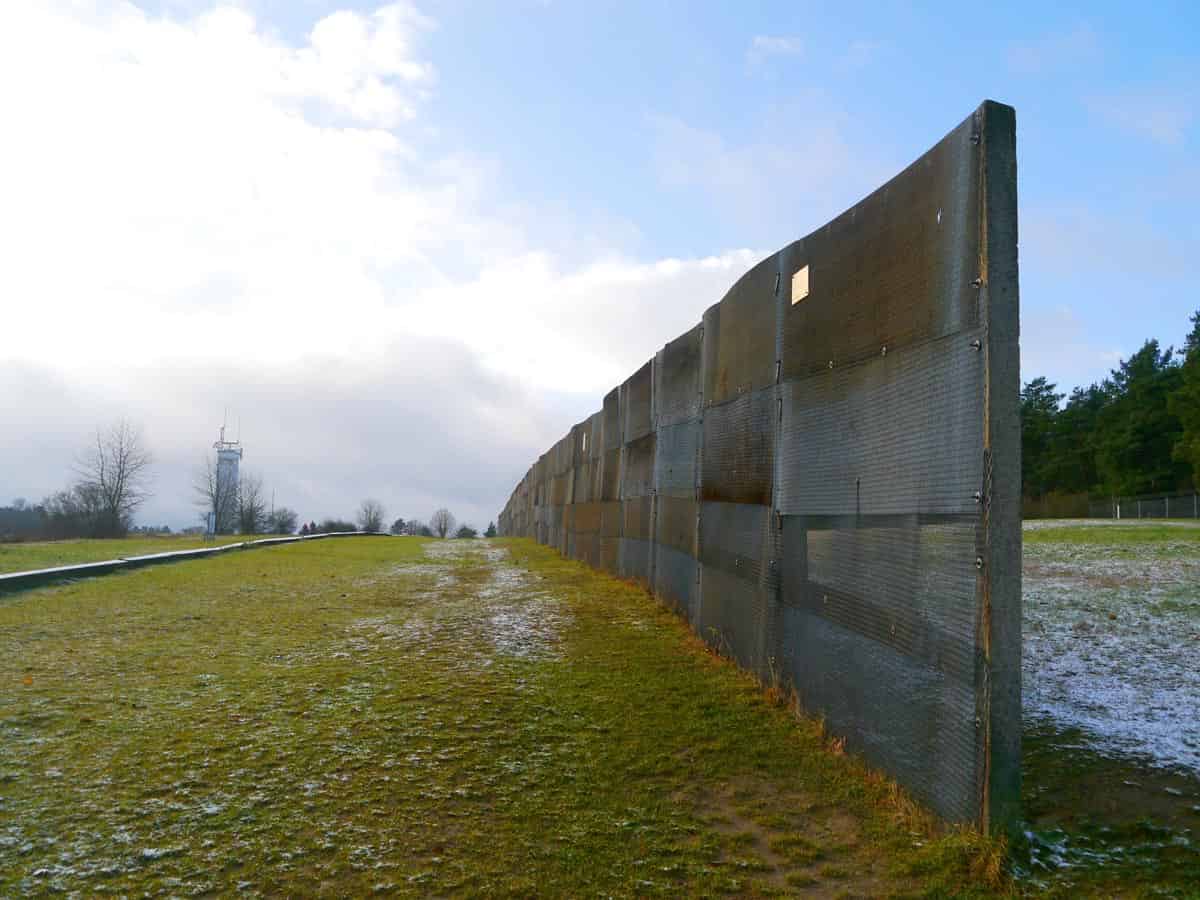 Some of the last remaining fences

Great story about Michael, who was one of our guides last summer in Holland/Belgium. Karen and I are on Danube trip on July 26. If he is on that trip, lucky us. If not, good wishes to you and your family.
Hi Sheldon and Karen, so great to hear from you and I'm happy that you'll be on the Danube trip in July. If I don't see you there, have fun going with the flow! I'm sure you'll love it. You may also find this post interesting: http://acceptable-summer.flywheelsites.com/river-cruise-biking/ Family is doing great and we're all enjoying the travels.
Top