If you've been a guest on a Backroads trip, you probably remember how bright, friendly, hard-working and extremely energetic your Trip Leaders were. Well, it's safe to say that most Backroads employees, across the board, share similar traits. So what happens when 350 of us set aside our day-to-day work and embark on a trip of our own? A veritable explosion of epic biking, hiking, laughing, bonding, eating, toasting, costumes and dancing known as the Staff Ride! The Staff Ride is a very special tradition that has taken place each year since the company was founded 36 years ago. Tom Hale, Backroads' founder and president, believes that in order to truly understand the joy of active travel, we need to experience it for ourselves. Every October, each Backroads employee is invited to join in four days of great riding and four nights of incredible local cuisine, customs and celebrations. 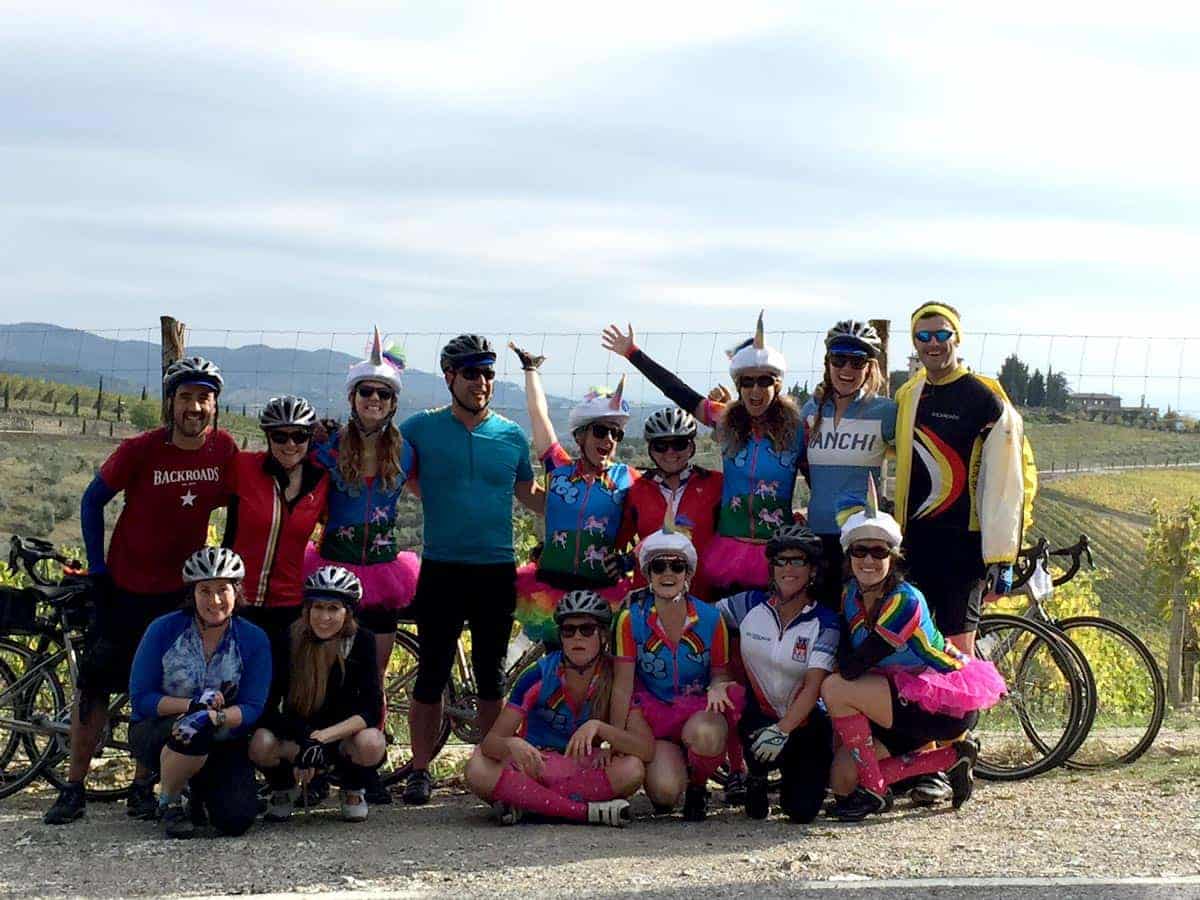 I started working at the Backroads Berkeley office in February, and I've been hearing coworkers talk about the trip since my first day. I was admittedly a bit nervous (four days of hard-core biking and all those extroverts!) but it was a once-in-a-lifetime opportunity that I didn't want to miss. Plus, this year's destination was Tuscany! I had to go. Here's a brief glimpse inside the happy spectacle and experience that is the Staff Ride.

Six massive buses, filled to the brim with excited Backroads employees representing 20 different countries, departed rainy Florence and climbed the winding roads to Abbazia di Spineto, an 11th-century stone abbey at the edge of Val d'Orcia, a UNESCO World Heritage Site. All around me, there were Trip Leaders being reunited, telling stories, singing, laughing and joking with each other. I had the distinct sense, as I took in the cacophony, of being the new kid at summer camp. Luckily, by the time we arrived at our destination, I'd already had a chance to get to know quite a few of the super-friendly people around me. Our bus pulled off the main road and followed the narrow cypress-lined path to the abbey. From the window, we could see row after row of bikes waiting. I don't think I really understood just how many of us were on the ride until I saw those 350 bikes! After coffee and a lively company meeting showcasing all the new Backroads destinations for 2016 and beyond (Brazil, anyone?), we ate a carb-loading pasta lunch in the stone courtyard. The sun appeared just in time for us to find our bikes and hit the road!

As we lined up to leave the gate, I was quite nervous. What if I fell? What if I couldn't keep up? But with a deep breath and some encouragement from the geared-up cyclists around me, off I went. That first ride was short, but challenging--a good introduction to those Tuscan hills! Coasting downhill with the autumn wind on my face, I finally relaxed and was able to fully take in my surroundings: rolling hills, endless rows of cypress trees, ancient hill towns and everywhere, a golden quilt of grapevines. Cheers from fellow cyclists could be heard echoing far and wide throughout the vineyards. In the evening, both exhausted and energized, we toasted the first day of Staff Ride with prosecco and feasted on a lavish spread of local delicacies before dancing the night away. Day 2 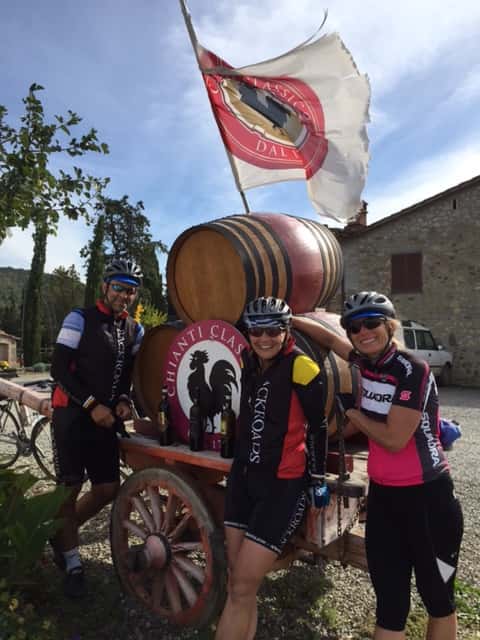 After fueling up with breakfast (and some strong coffee), we hopped back in the saddle and began the longest (and hilliest) ride of the trip: 65 miles, or a little over a metric century. Many of the veteran Staff Riders packed extra suitcases for costumes alone--glitter, tulle, sequins and capes. Flags showing regional pride fluttered behind groups of cyclists in the crisp Tuscan air. We passed through tiny stone villages, where the locals stood awed in door frames and leaned out windows to watch and wave to us, and along quiet roads with soaring views of vineyards and hills topped with fairytale castles. At times it was difficult to get into a good cadence; there were too many great photo opportunities! Mid-way through the day, we were greeted like family in the courtyard of the Hotel Borgo Casabianca, a lovely inn that maintains a longstanding relationship with Backroads and our guests. We were served a fortifying lunch of sweet corn salad, cured salami, hard white cheese and rustic sandwiches with tomatoes, fresh basil and the most delicious, crispy, salty porchetta imaginable, carved for us on the spot. We were ravenous! After lingering in the sun for a long moment with a glass of Chianti, it was time to get back on the road. Finally, one more loooong and winding incline brought us to Radda in Chianti, the crown jewel of the region. We were truly welcomed with open arms by the townspeople, who, we soon learned, had been busy cooking, constructing and preparing for weeks in anticipation of our visit. Row upon row of white tents and tables filled the town's cobblestone streets, which had been closed off in honor of our arrival. Excitement filled the air. To kick off the evening, we were treated to a Chianti wine tasting (in Chianti!). Then, following a heartfelt speech by the town's mayor, we sat down to a home-cooked meal of hearty ribollita (stew), tender cinghiale (wild boar) and schiacciata con l'uva (grape torte), served personally by the proud people of Radda. The celebration continued late into the night, with dancing and revelry at a local disco. 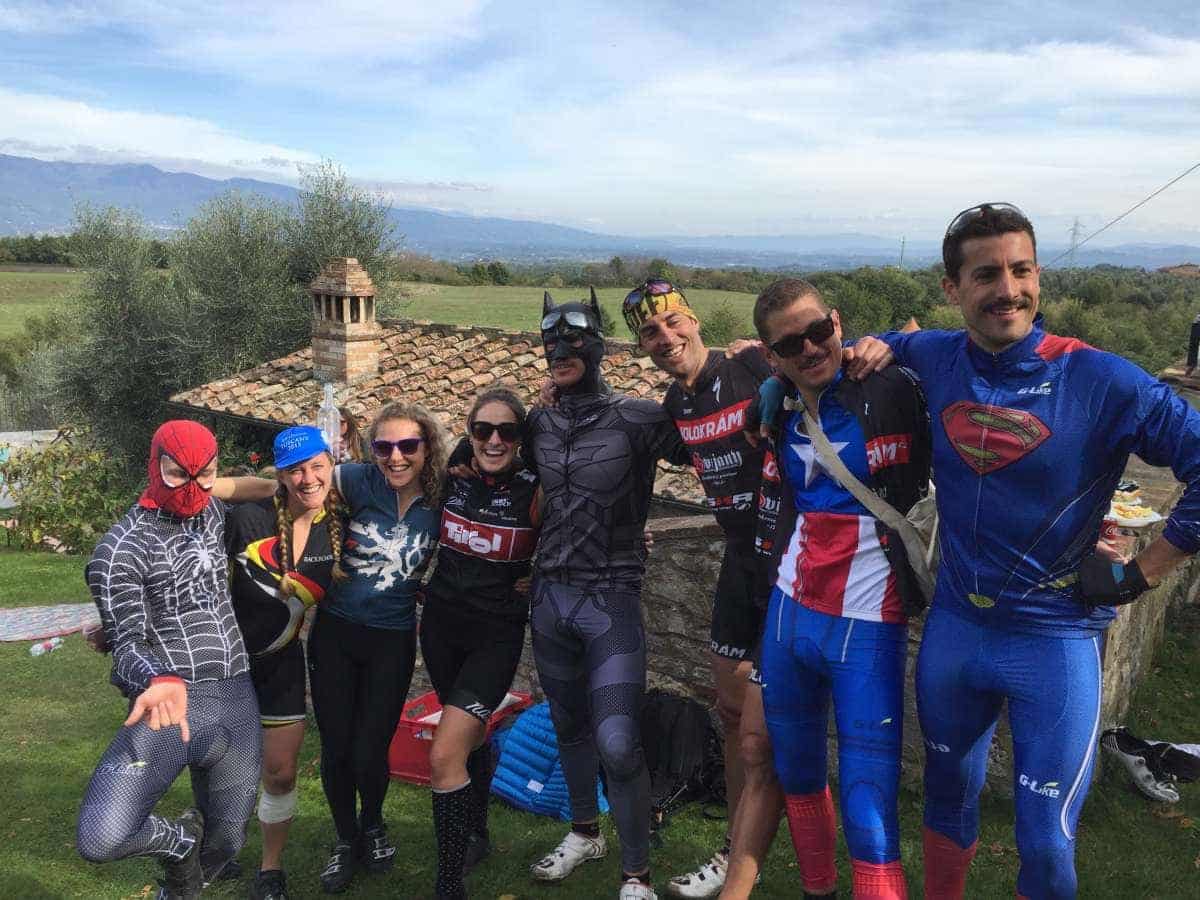 Day 3 In true Backroads style, options abounded on Day 3. Many people--including me--headed to the surrounding hills for an afternoon of hiking (12 miles!). Many more joined the day's group ride through the heart of Chianti, which included an olive oil and wine tasting--and, of course, some cappuccino--en route. Despite the epic vistas and wonderful tastings, the highlight of the day was a delicious family-hosted farm lunch of fresh pasta, local olive oil, meat and cheese, topped off with homemade biscotti dipped in amaretto followed by the dreaded "Walls of Pain" climb--the most challenging of the week. Those who didn't hike or ride opted instead to stroll through the streets and explore the many wonderful shops in Radda. In the evening, after we'd restored our energy with gelato and caffè corretto (a delicious blend of strong espresso and sambuca), the village restaurants opened their doors to us for a "taste around town" extravaganza; each served a special signature dish: pizza, lasagna, pappa al pomodoro (a hearty bread soup), prosciutto Toscano, finocchiona and other cured meats, and even tripe sandwiches. Backroads really took over the town! In every direction, down every street and in every shop and restaurant, you were sure to see a familiar face. The night ended with a performance by an Italian swing band, and more dancing. Though I'll admit to sneaking back to my hotel early with a book, before I left I found myself marveling, yet again, at the stamina, enthusiasm, positivity and sheer energy of my Backroads coworkers. 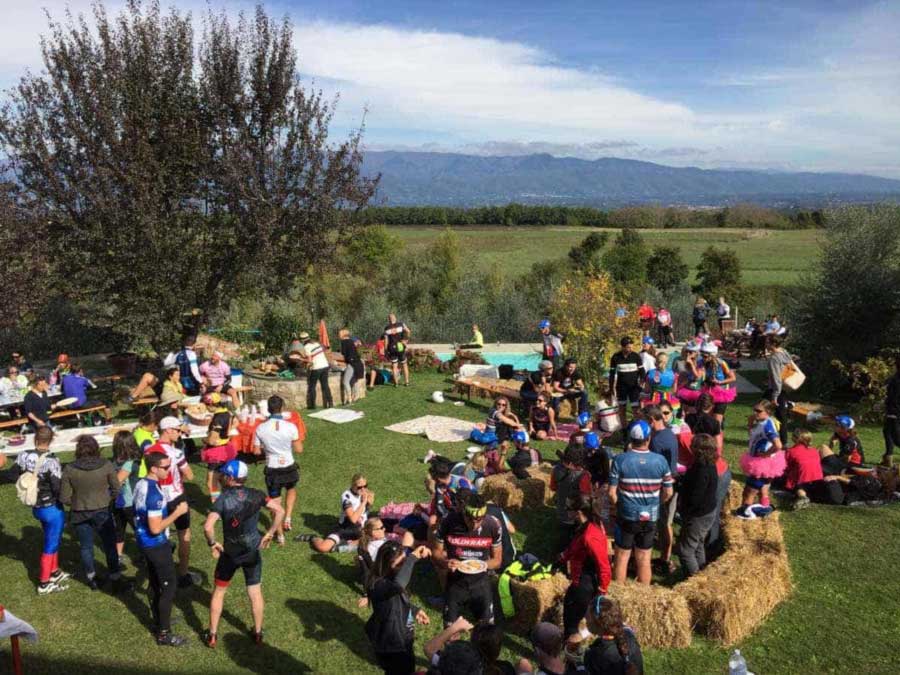 The final ride was every bit as thrilling as the rest. The smooth country roads had few cars and were well-paved, which made for great cycling from start to finish. Along the way, we stopped to explore the medieval walled commune of Monteriggioni and lunched at Il Ciliegio winery before continuing on to the ancient town of Siena, home to the Palio, Italy's most famous horse race. Each of the 17 Sienese neighborhoods, or contrada, that race in the Paglio is represented by a colorful flag with a unique image of an animal or symbol, and tonight we would be the honored guests of the bruco contrada (the caterpillar neighborhood). On our final evening, we converged on the town center for a festive aperitivo and then walked en masse through the narrow cobblestone streets. A farewell pasta dinner awaited under a woven grapevine canopy twinkling with strands of lights. On the tablecloths were printed yellow flags with brightly colored caterpillars. Because Backroads has such a deeply rooted relationship with this particular contrada, we were the first outside group allowed to host a party inside their clubhouse! We were truly honored to be there. 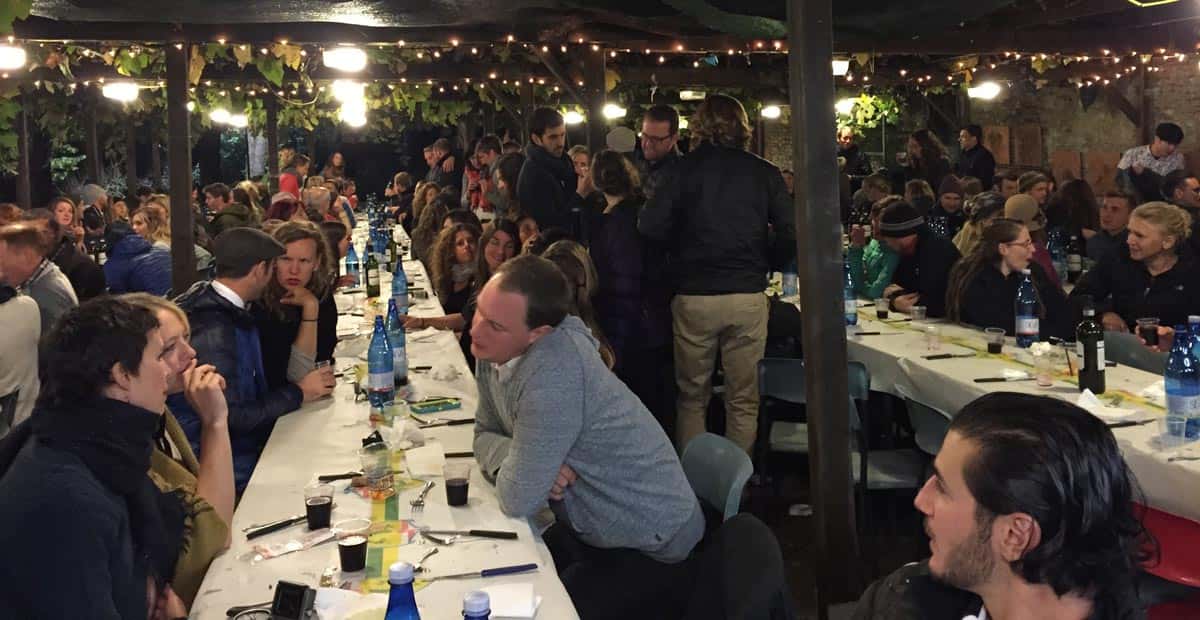 The next morning, seemingly as quickly as it had begun, it was over. Everyone said their goodbyes, parted ways and either continued their travels, or headed home to their own corners of the world. I began the long trip back to the Bay Area. The same person, but changed. It may seem like one big crazy fun party--and it is--but it's also more than that. The true magic of Staff Ride is that everyone who participates develops strong and lasting bonds with coworkers, and each of us carries home a greater understanding of the intricacies of a trip, the importance of each of our roles within the company... and the true spirit of Backroads. Here's to next year!