Yellowstone and Grand Teton are two of the best national parks in the United States for viewing wildlife. These two parks are part of the Greater Yellowstone Ecosystem (GYE), which covers 19 million acres in Wyoming, Montana and Idaho. Each year, millions of people visit these areas, many of whom travel here specifically to see the variety of animals that roam freely in this region. In the GYE, the "Big Five" refers to the most popular animals that visitors hope to see in the parks-American bison, elk, gray wolves, grizzly bears and moose. Whether you are driving, cycling, hiking, rafting, kayaking, cross-country skiing, snowshoeing or just sitting on a bench, you are sure to see a variety of animals during your visit, but the Big Five continue to win the hearts of our guests during their Backroads vacations. 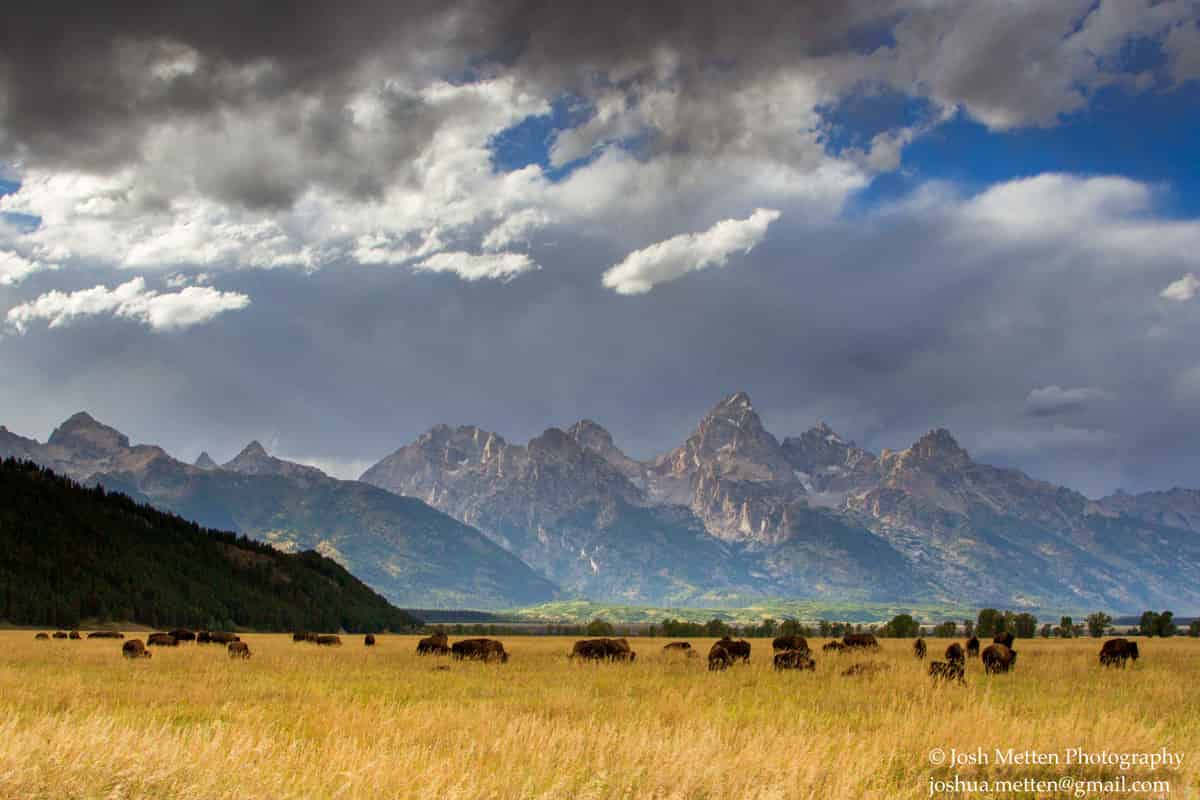 Due to the abundance of wildlife viewing and the natural beauty of the region, these parks have become some of the most popular in the country--with Yellowstone one of the country's top five most visited parks, seeing over three million visitors each year. With the influx of tourists comes increased challenges to the park and its iconic wildlife. The best way to reduce these impacts is to educate people about the wildlife in the region so that when they visit, they know how to enjoy one of our most cherished national landscapes without negatively impacting the fragile ecosystems of the parks . American Bison 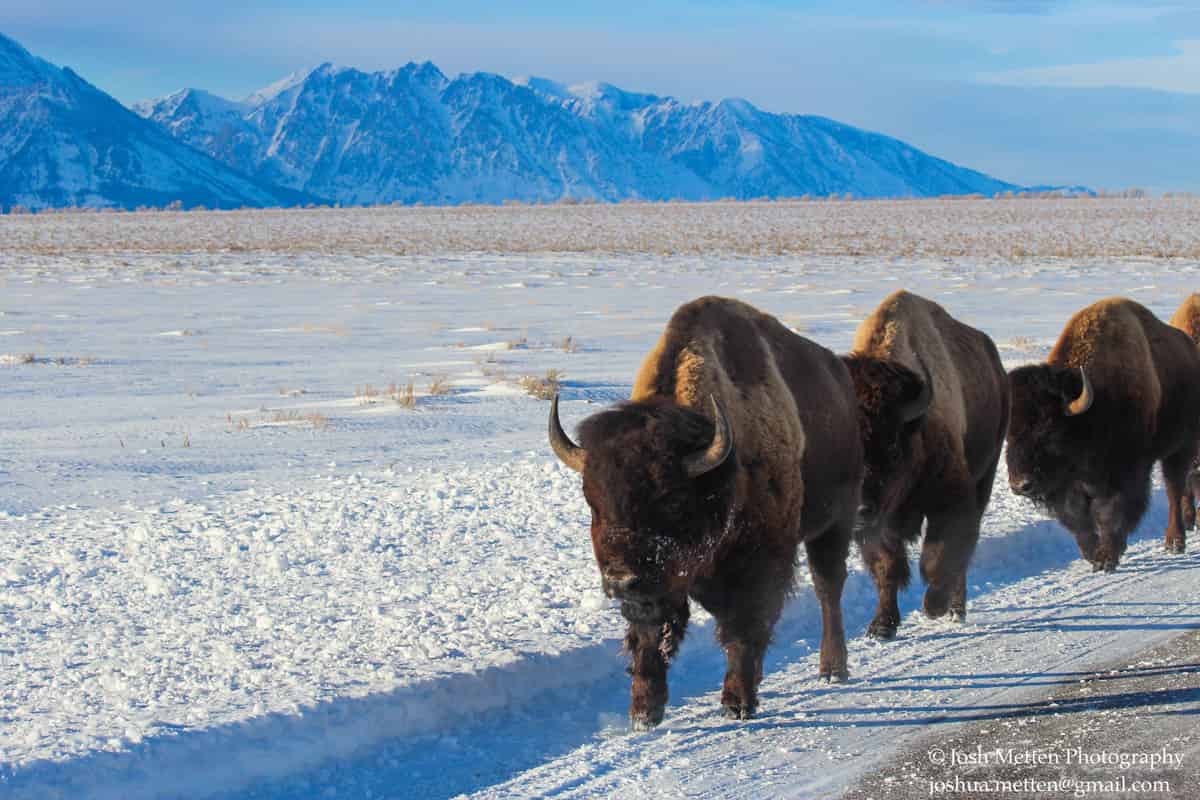 Yellowstone's bison, commonly referred to as buffalo, are the oldest and largest public bison herd in the United States. Bison are a must-see animal during any park visit, since they stand as an iconic symbol of the region and the state of Wyoming. Bison can weigh up to 2,000 pounds and run as fast as 40 miles per hour. On any given trip to Yellowstone, you are almost guaranteed to spot one of these oddly shaped herbivores grazing at a distance. On many occasions, they slowly saunter across the park roads, causing what we at Backroads call an "am jam"-- when traffic gets backed up due to the excitement of an animal sighting. While it is easy to get very close to a bison (sometimes they will walk right up to your car), it is important to keep your distance, because if scared or aggravated, these huge animals will get aggressive. There have been people harmed by bison in the park, but as long as you give them space, bison are no threat and are thrilling to observe in their natural habitat. Elk 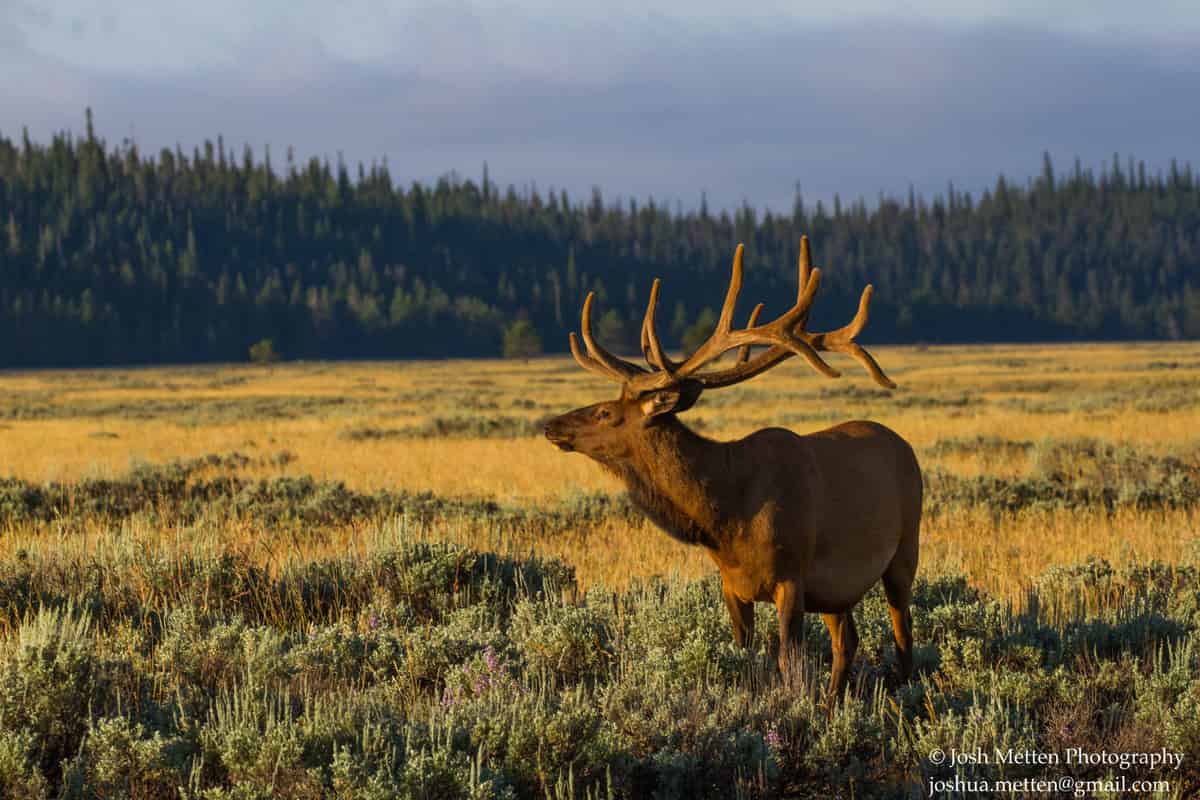 The Yellowstone-Teton area is also home to over 30,000 to 40,000 free-ranging elk, also known as wapiti to the Shawnee, meaning "white-rumped deer". Elk spend their summers in Yellowstone's plentiful grasslands and then migrate to warmer areas with less snowfall and more vegetation for the winter. Elk are not spotted as often as bison, but the bull elk are one of the most photographed animals in the park, probably because of their impressive antlers. Bulls start growing their antlers around one year old and then in the spring each year, they drop their antlers and grow a new pair. In late summer, elk rub the "velvet" off of their antlers and you can see the signs of their rubbing on trees throughout the parks. Gray Wolf 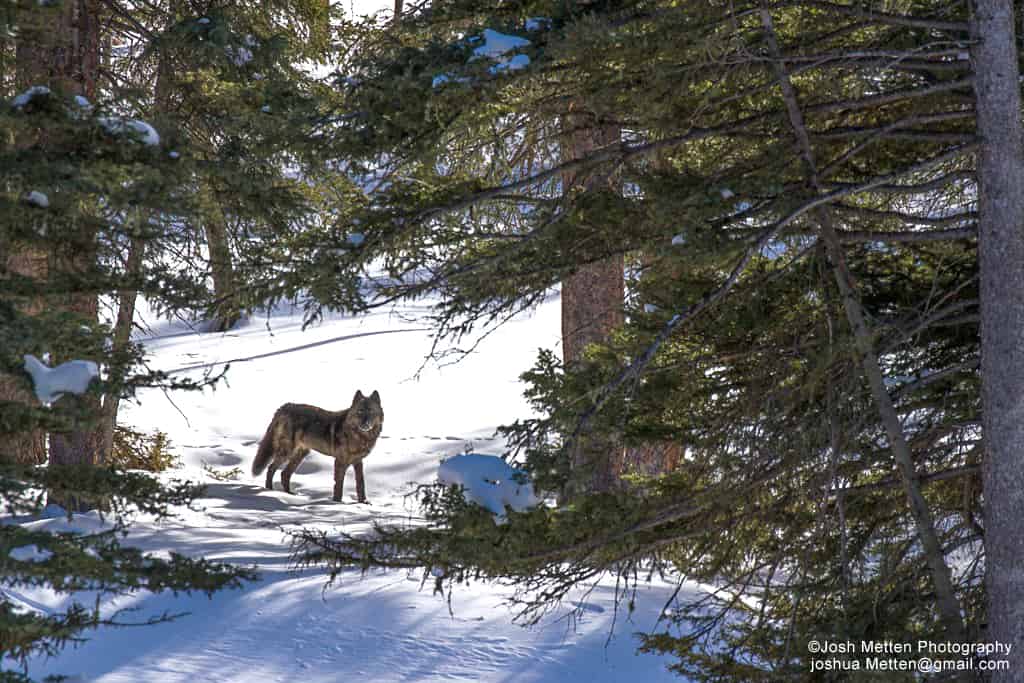 One of the parks' most elusive animals is the gray wolf. After centuries of wolves being systematically exterminated from North America, in 1973 the northern Rocky Mountain wolf, or gray wolf, was listed as an endangered species. In 1995 the National Park Service reintroduced wolves into Yellowstone from Canada and northwest Montana where they have slowly grown in numbers. Over 100 wolves in at least eight different packs now reside within Yellowstone, with hundreds more inhabiting the GYE. They are most active at dawn and dusk. If you happen to spot one of these beautiful animals, count yourself lucky! Grizzly Bears 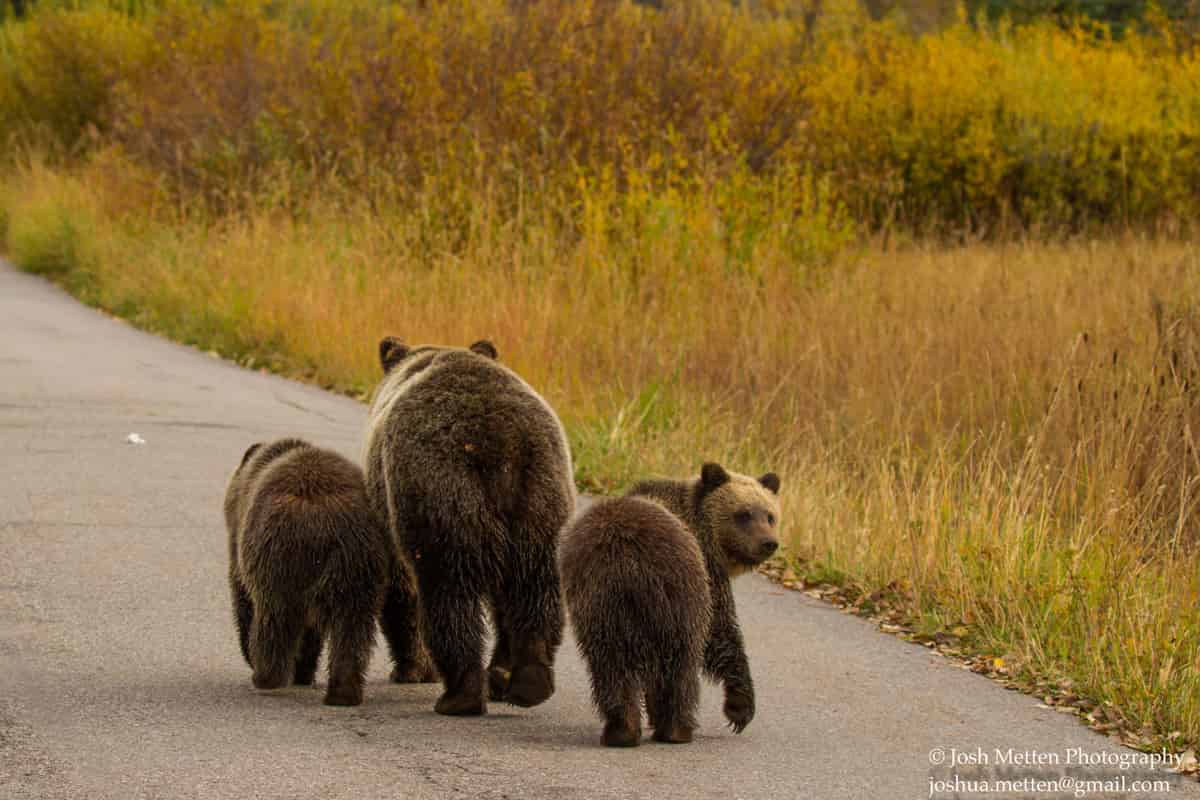 GYE is one of only five regions in North America where grizzly bears are found. Populations have been threatened by habitat loss and hunting. Now only about 600 live within the Yellowstone-Teton area. Grizzly bears generally don't attack humans unless they feel threatened. There are infrequent grizzly attacks in the park but occasionally bears have to be euthanized because of interactions with humans - often a result of human negligence for which the bears had to pay the price. In many cases, bear-human interactions can be avoided by better understanding how to recreate safely in bear territory. Never approach bears, make noise while hiking so as not to surprise a bear, and always make sure food is properly stored in bear-proof containers. If bears become accustomed to finding food from negligent tourists, they often have to be euthanized. However, when safely observed in the wild, spotting a grizzly bear is an experience you'll remember for a lifetime! Moose 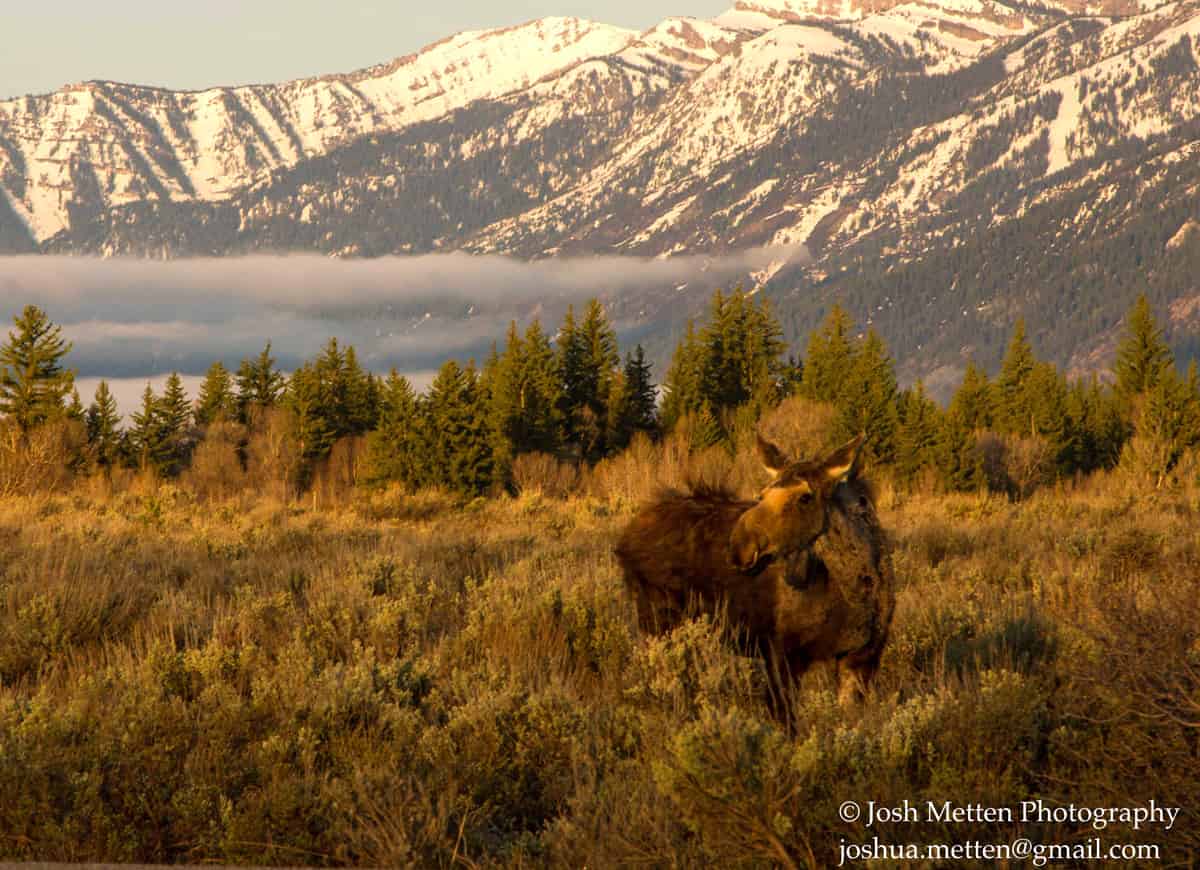 Moose are a fairly frequent yet very special animal to spot when visiting the parks. Moose tend to hang out in marshy meadows or along the banks of rivers and lakes. They usually travel solo or in small groups. The long legs of moose allow them to run through a forest of downed logs at full gallop and trudge through deep snow that deer and elk tend to avoid in the winter time. Around 800 moose inhabit the GYE, with the majority of them found in Grand Teton National Park. Their ability to roam freely has been restricted in past decades due to fencing from ranches that have been grandfathered into national park land but the Jackson Hole Wildlife Foundation, with the help of volunteers, is currently working on removing miles of obsolete barbed-wire fencing. Adult moose can weigh over 1,000 lbs and be over 7 ft tall at their shoulders! With such abundant wildlife and the unparalleled remoteness of Yellowstone and Grand Teton National Parks, visiting the parks can make you feel like you are going back in time to explore the Wild West. At one time this was a region when animals were exponentially more abundant and free to roam without the stress of human impact. In order to preserve what is still left of this wild frontier, we need to make a concerted effort to educate ourselves about wildlife and how to recreate responsibly. Always view wildlife from a distance. Keep food contained at all times. Consider spending time volunteering with a local conservation group. The more we know about our natural environment, the greater our appreciation will be for efforts to protect these sacred landscapes. 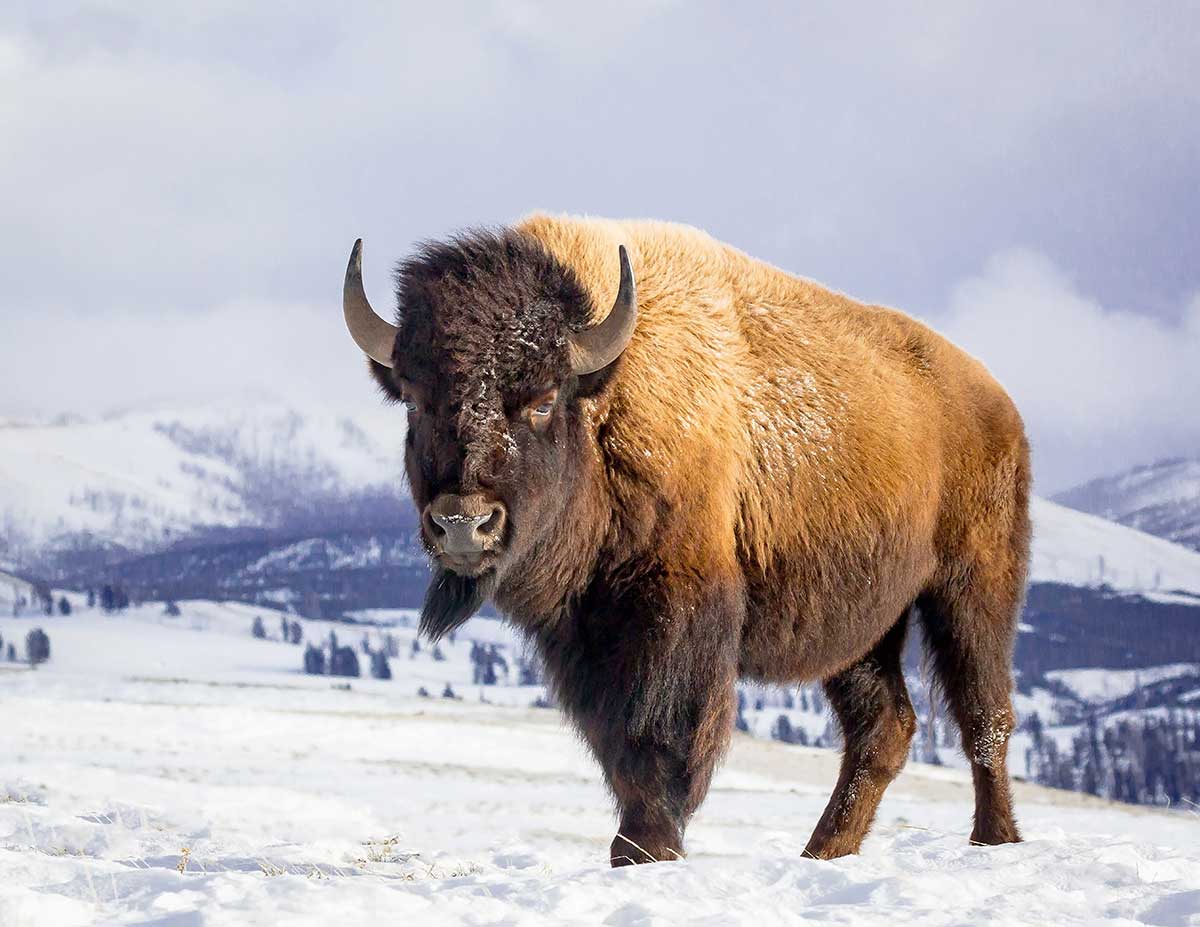