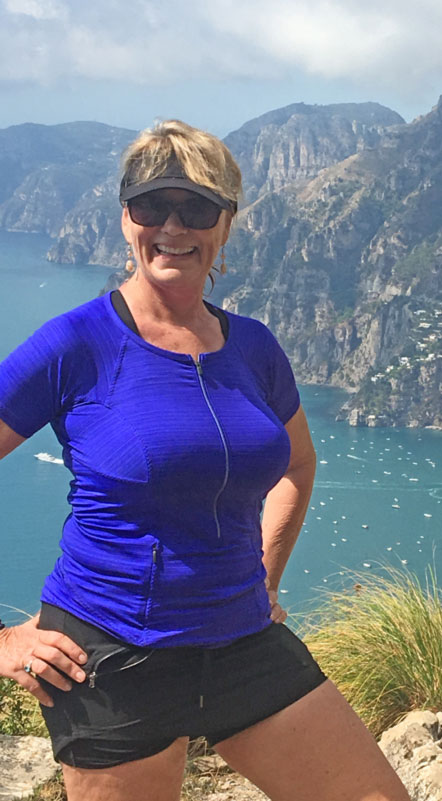 When you go on an epic trip, such as my recent Backroads adventure, there's often a special experience that defines the trip. It's usually not the obvious one you gravitated to in the catalog or on the website. It may even seem inconsequential at the time, but then expands in meaning until it becomes the primary signifier of the trip. If you're very lucky, you return with something you can hold in your hand to remember the magic of the moment. My serendipitous experience occurred midway through my first hiking trip with Backroads: nine days of exploring the South Island of New Zealand. I'd signed up for the challenging hike with rock scramble guided by our incredible leaders, Brandon and Martin. Everything changed when I heard the words "mussels on the beach" on a more easygoing beach walk option. I'm a real foodie and always on the lookout for unique culinary experiences, plus I'd sampled the large and luscious New Zealand green mussels at a restaurant the day before and was ready for an encore. The fragrance of a wood campfire brings back many of my best childhood memories. In other words, this activity had my name on it. 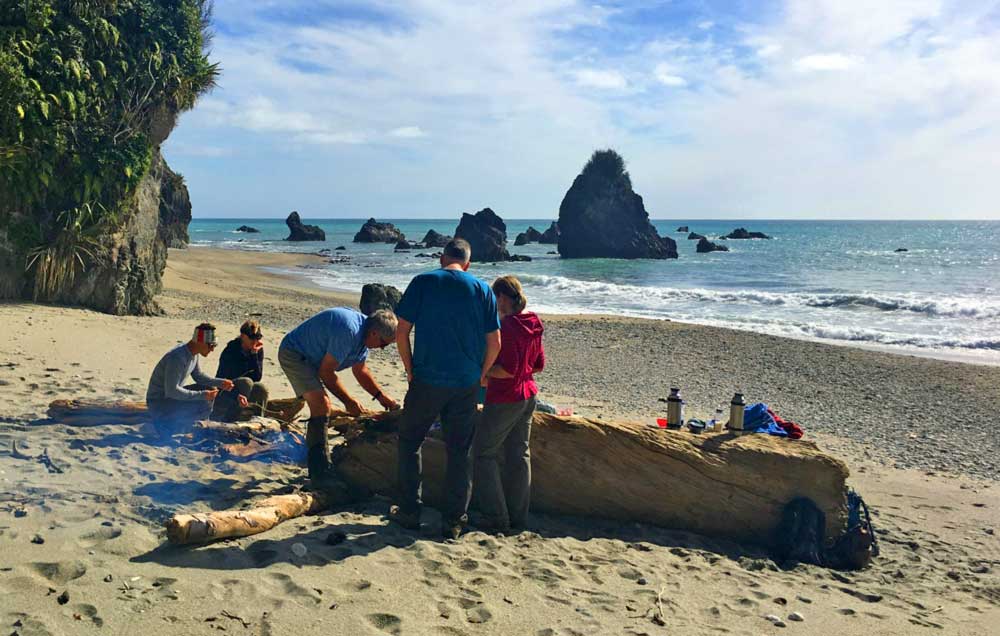 The leader of the beach walk, Jerry, owns the Wilderness Lodge where our group was staying. Jerry is the epitome of the phrase "local color" and knows everything about New Zealand. He'd taken us on a very dark walk the night before to see glowworms, pointing out every constellation and galaxy visible from the southern hemisphere, a big wow. I had a feeling of anticipation about spending more time learning from him. 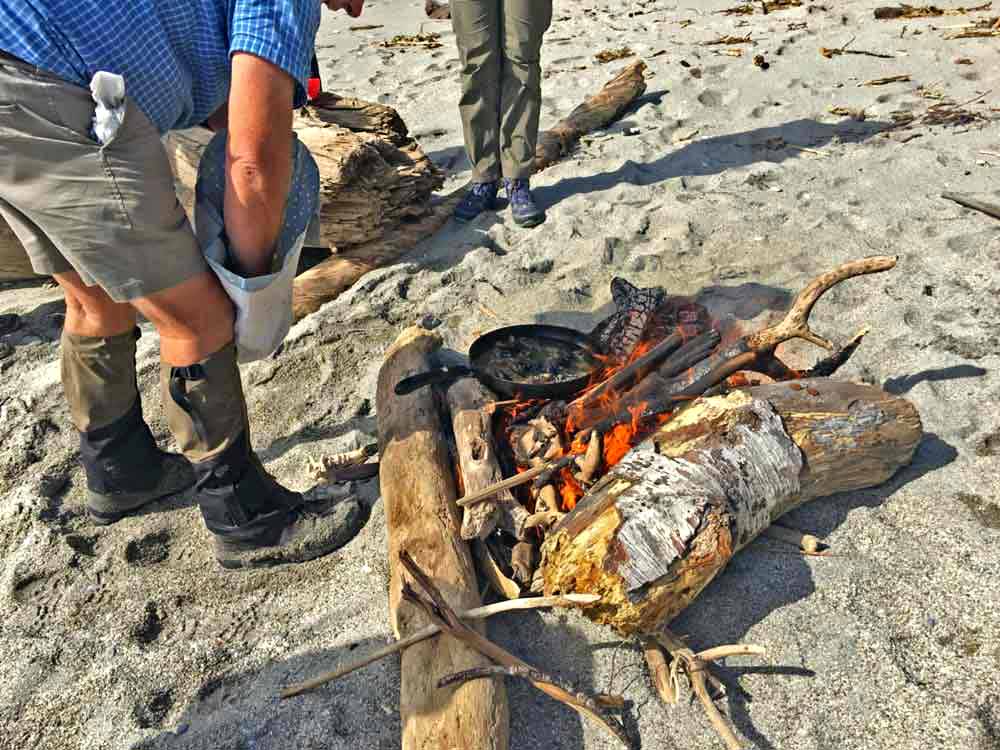 Our group included people from landlocked countries and states who were thrilled to see the ocean. I'm a Southern California girl, so beaches don't normally impress me, but this one had monolithic rock structures near the shore in shapes that resemble sea monsters. After a nice walk at a brisk clip, Jerry pointed us toward a cave where we could sit on a rock in shade while he waded into the water to harvest the mussels. He walked out about twenty feet from shore and crouched down with a small net. The surf was shallow, but Jerry is an older gentleman so I hoped he wouldn't slip and fall. He returned shortly with his net full of mussels. A little further down the beach he directed us to collect firewood. Soon we had a snapping fire with butter, garlic and mussels sautéing in a cast iron skillet. I talked two of my new friends into trying mussels for the first time--something they were dubious about but thanked me for later--and then surrendered to the bliss of eating the freshest mussels of my life while enveloped in azure blue sky and ocean. 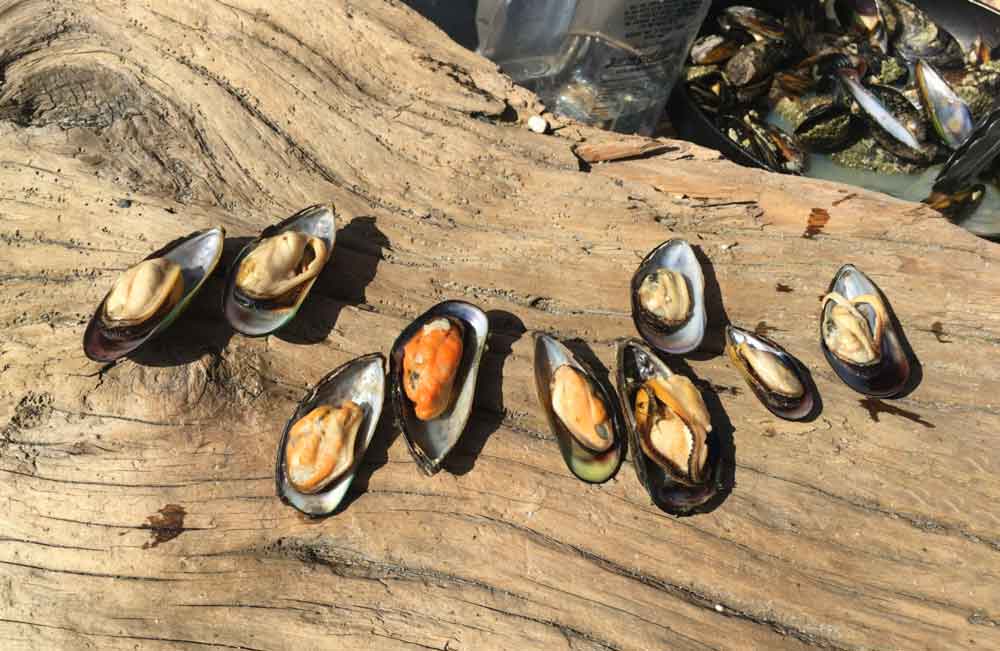 Our stomachs full, I thought we would just amble back to the van and return to the Wilderness Lodge for a nice nap. Jerry had other ideas and introduced an activity. We would search for New Zealand jade as we walked along the beach. I was excited because I'd planned to buy jade jewelry to remember the trip but was dissuaded by the price. It hadn't occurred to me I could find it for free on the beach! Jerry found a piece immediately and rubbed it with his bug repellent stick. A green glow emerged as the oil touched the rock. My competitive nature took over and I ran to Jerry time after time with one greenish rock after another. At first he swiped it with his bug stick to humor me and then patiently explained what to look for, stressing the criteria that the rock should be completely smooth. After a while he dispensed with the bug stick step and just threw them down. 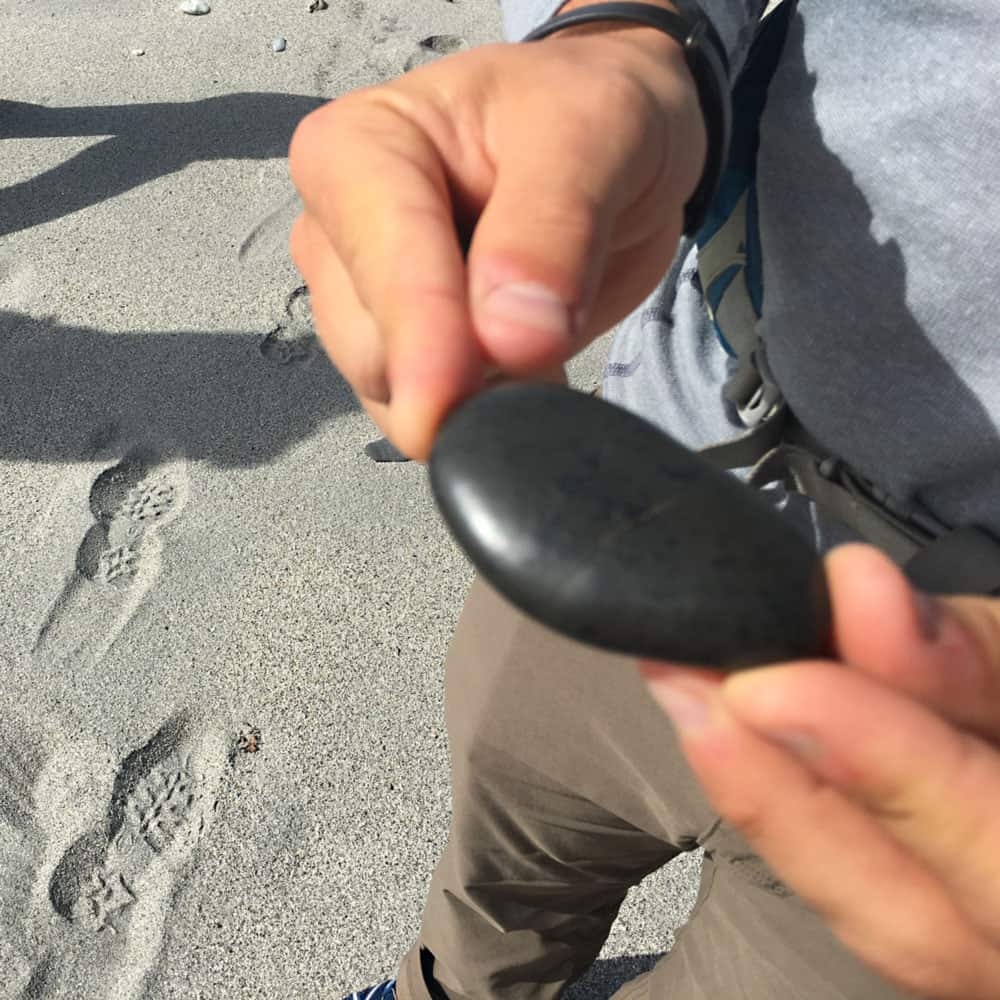 So when I picked up a very large egg-shaped rock with a deep circular groove in the surface, I was certain that this was another imposter. I almost threw it back. Instead, I approached Jerry timidly with the large specimen in my outstretched hand. Jerry lit up! He quickly grabbed his bug stick from the pocket of his camp shirt and made a wide swipe across my rock, which turned such a deep and glorious green that it felt like a scene from Lord of the Rings. I expected Gandalf to appear. Jerry put it into his pocket, saying he had to confiscate my jade because this particular piece had special qualities and must be returned to the Maori. He was kidding, of course, but the potential loss of my treasure made my New Zealand jade all the more appreciated. The definition of serendipity is "fortunate happenstance," a pleasant surprise that occurs when you weren't really looking for it. It can't be planned or prepared for since the essence is that it's unexpected. Oh, and you won't know "this is it" when it happens. You may think, "this could be it," but you won't know for sure for a few weeks, at the soonest. I went on my first Backroads trip and my first trip to New Zealand with many expectations. They were all met and most were exceeded, particularly my desire to find a community of like-minded adventurers that I could travel with regularly. What I couldn't have imagined is that I would find a beautiful piece of jade on the beach and discover that its imperfections make it even more precious. 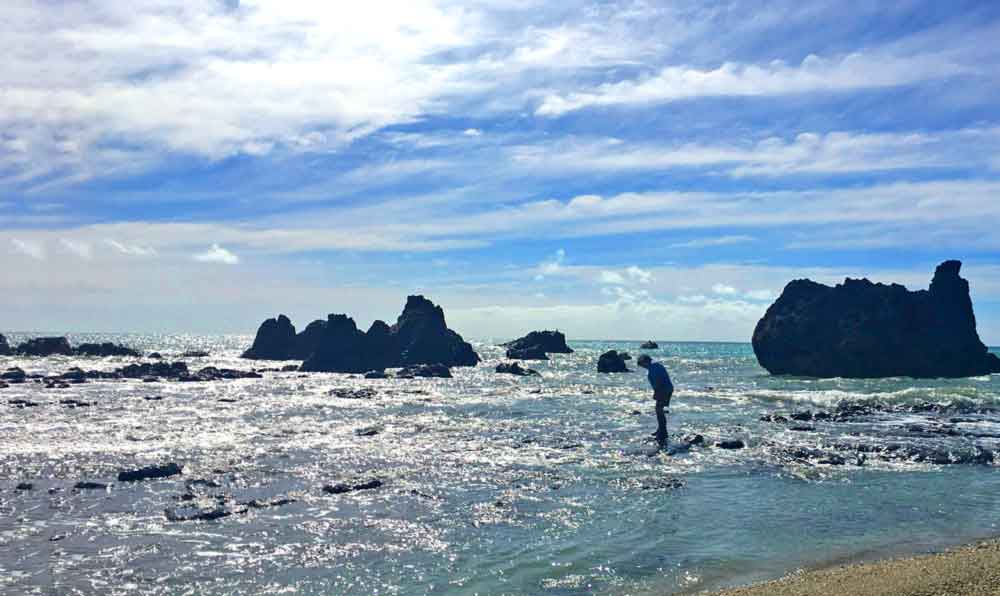