Why is it that when some people are brought together, they end up falling in love? Is it similar personalities or shared interests that connect them? Perhaps it's purely chemical. Or maybe it's something more dramatic, like conquering a feat together that forges an unbreakable bond? When Backroads was founded in 1979, we had no idea that in addition to creating terrific vacations, we'd also be creating lasting love connections. Today there are close to 60 trip leaders married to each other, with some 100 children. These couples and their families are scattered around the world, with some just recently married and others who have been together for over 20 years. Really, it's no surprise our leaders are attracted to each other, since they've been hired for their outgoing personalities, intelligence and downright sparkle, and their shared love for travel and the outdoors. Here are some of their stories of falling in love. 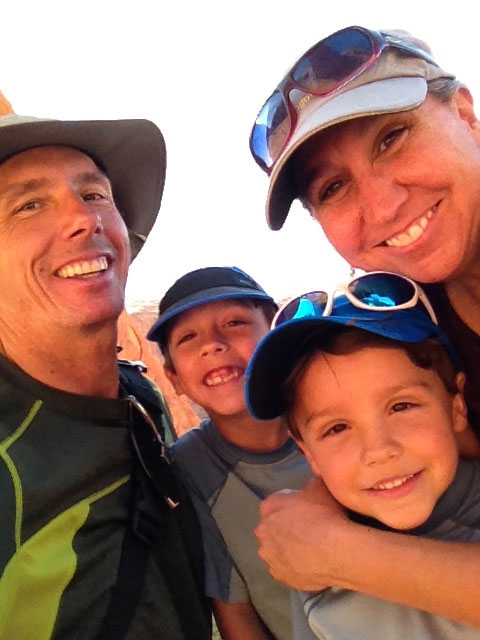 In 1990, Jo Zulaica and Paul Smith connected while leading one of our historic California Wine Country Weekend camping trips together. Their relationship was immediately put to the test as it rained the entire weekend. After surrendering their sleeping bags to some guests in need, Paul and Jo had to wrap themselves in tablecloths and sleep in the van each night. In Jo's words, it was "not the most auspicious start!" Luckily, they both were scheduled to lead in the Southwest afterward and were able to dry out and get to know each other better in Bryce, Zion and the Grand Canyon. Through sun and rain, they forged an inseparable bond working side by side around the globe. For over ten years they spent three months a year leading trips down the west coast of New Zealand's South Island where, according to Jo, "In between trips we stayed in a little cabin in Queenstown, right under Bob's Peak, where we eloped, and loved staying there, looking at the Remarkables Range and Lake Wakatipu--an amazing place." How romantic! After 15 years of leading together, Paul and Jo are still working for Backroads with Paul as our Regional Expert in the San Juan Islands, China, Bali and New Zealand, and Jo as our Global Leader Development Manager. They live in Salt Lake City, Utah, with their "active and goofy fun" boys, Derrick, 7, and Donovan, 5. So how did they make it work over the years? Jo says, "We are both really independent and can adjust to changing landscapes easily. We got accustomed to being separated for three to five weeks followed by equal times together, and it just became the new pace of on/off, work/home tempo. Kids changed all that and Paul is home a lot more often... but now we are starting to take the kids with us!" 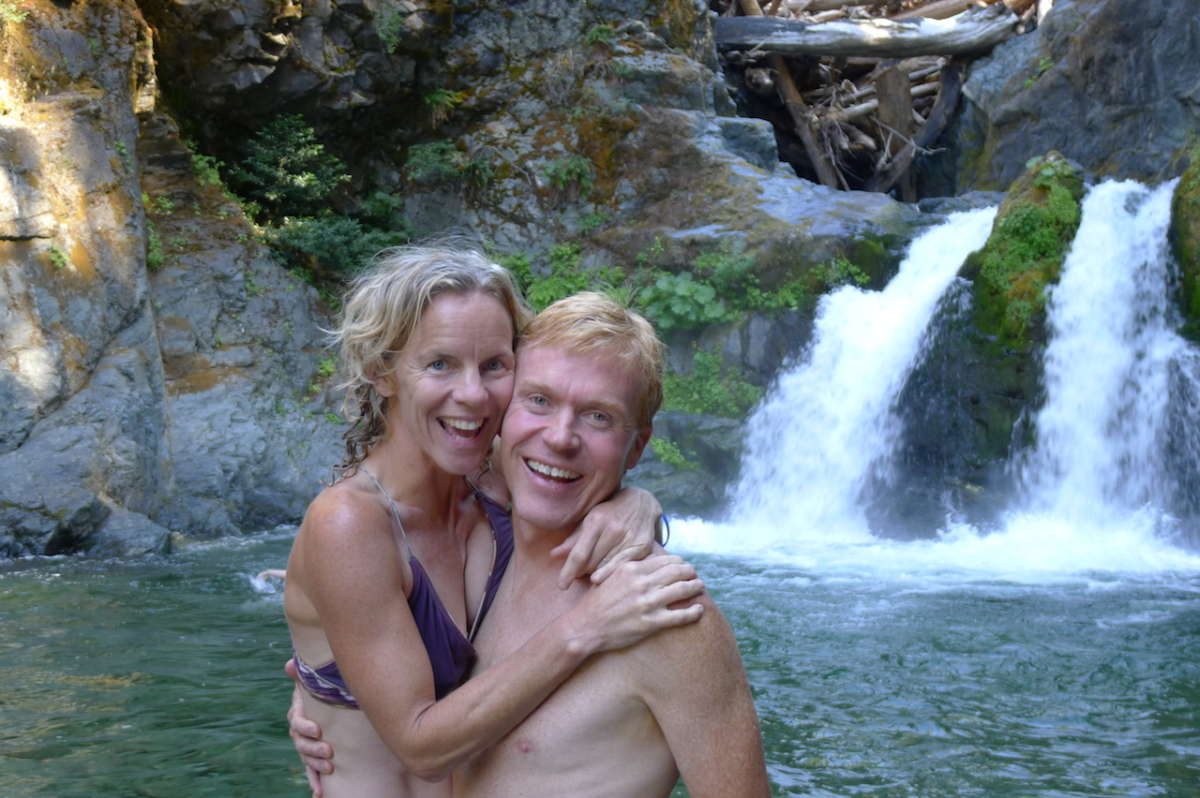 Coincidentally, Paul Smith played a major part in Eric and Stacy Poole's falling in love when he convinced Eric to take a break from his more exotic leading season in China, Nepal and France to lead trips in the San Juan Islands. Stacy had just finished her first year with Backroads and was getting ready to start graduate school at the University of Puget Sound when Backroads asked her to work a few more trips before she began classes in the fall. According to Stacy, "our paths were meant to collide." She shares their love story: "I remember the first time that I saw Eric. Paul had just picked him up at the airport. I had heard several stories about this well-traveled leader, and was even told by a fellow leader that he thought Eric and I would be a great match. We were scheduled to lead two back to back trips together. It became obvious that we enjoyed performing the various tasks with each other. We laughed a lot which is typical when you work so much and so intensely for a week. Most nights you are so tired after a hard day of work, and we found ourselves going on nighttime strolls and talking about everything. Even our guests began to pick up on the energy between us. 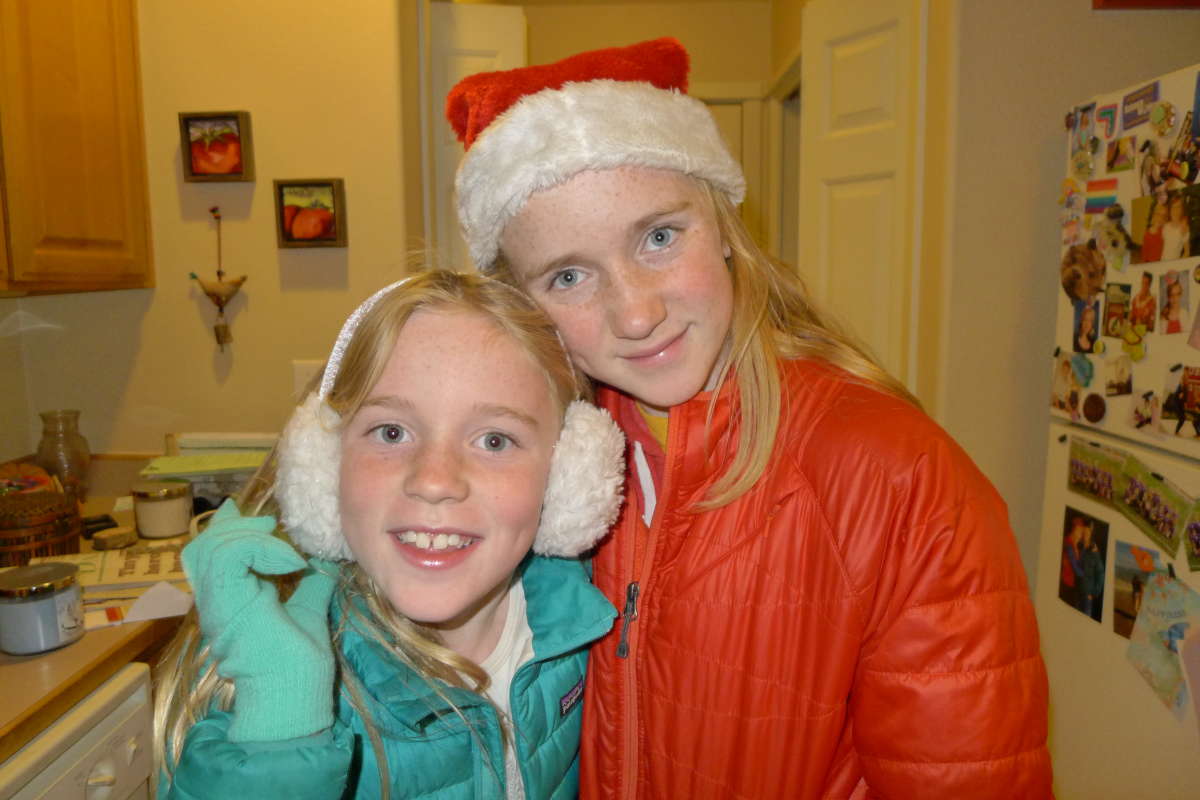 "After working two straight weeks together we were about to go our separate ways. Back to the Bay Area for Eric and school for me. We were sharing our breakfast when Eric exclaimed that he had these feelings, maybe a crush... and once he began talking my eyes welled up with tears of joy! Once we declared our love for each other we both knew that this was something amazing. Needless to say we canceled Eric's flight and after signing up for classes I decided to defer school and continue traveling with Backroads and Eric." Eric and Stacy got married in 1996 and now live in Ashland with their two girls, Allie, 11, and Aimee, 8. They still love spending time outdoors exploring, biking and running. 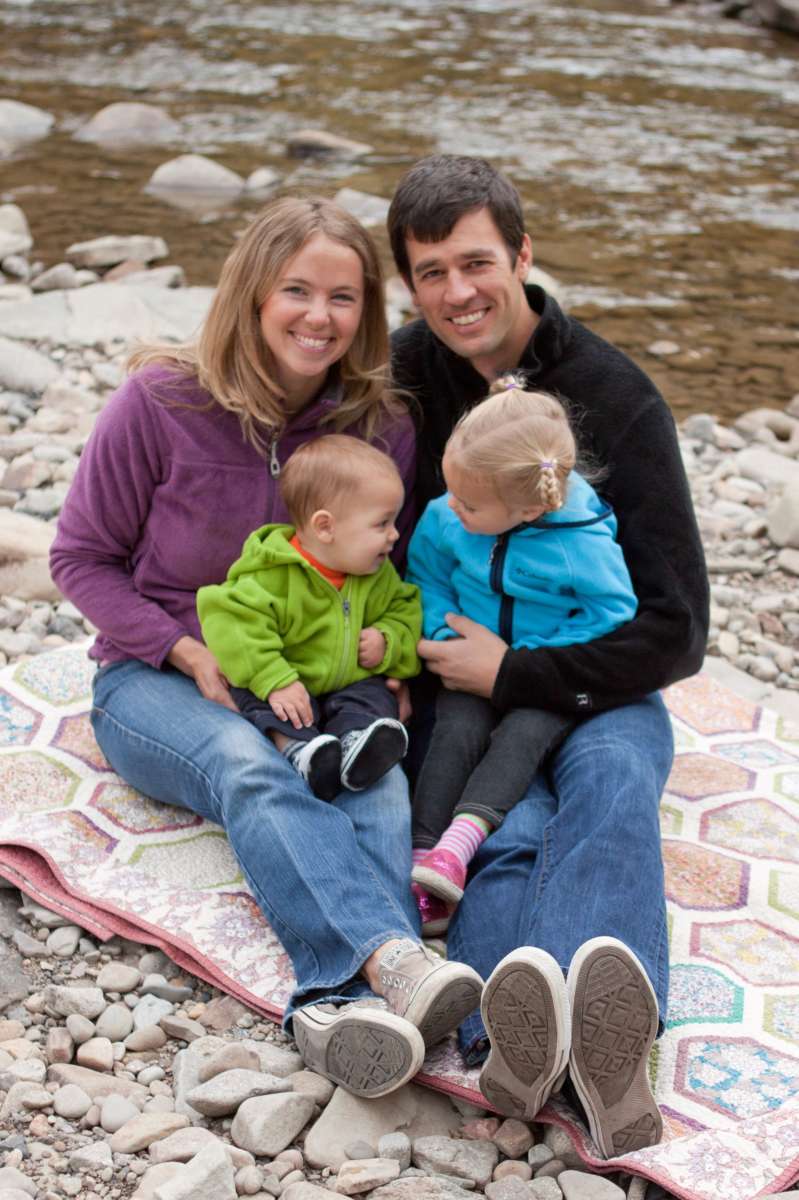 There must be something to the picturesque bays and idyllic cycling in the San Juan Islands that lends itself to romance. In 2003, Matt Dodd had been working in the canyons of Utah when an assignment to work in the San Juan Islands gave him a much-needed reprieve from a seemingly endless summer of days above 100 degrees. Meanwhile, Ashley Hegseth had been enjoying a more temperate summer leading trips in the Puget Sound. Ashley met Matt upon his arrival in a setting only Backroads leaders would consider romantic--amid a fleet of bicycles, safety triangles and tissue packets where Ashley was preparing for a trip. For the next four years they were joined at the hip, leading trips in the summer and teaching skiing in Montana in the winter. They decided to tie the knot in true Backroads fashion, by saying their vows at the top of a mountain then plummeting down a ski slope hand-in-hand. Matt, Ashley and their kids, Piper and Jasper, now live in Big Sky, Montana, where Matt is a lawyer and Ashley works as a pastry chef (check out her In a Pinch Baking Facebook page!). 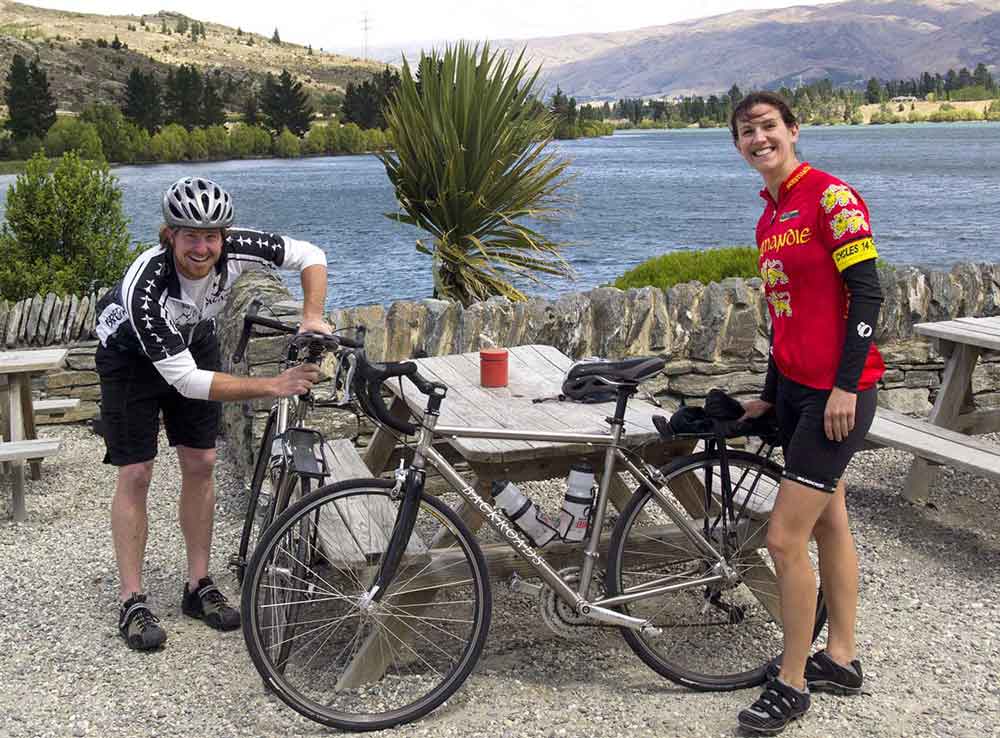 After three seasons of leading trips in France, Angela was really excited to be reassigned in 2007 to Alaska--the home of burly lumberjack men! Everyone had been talking about how much she was going to love Kevin Tierney, the Trip Specialist of the region, but she figured there were already women in line and wasn't going to bother. But during their first trip together caravanning two vans and a trailer from Denali down to Anchorage, her interest was sparked. Angela tells their story: "It was a blue bird day without a cloud in the sky and the ENTIRE mountain (Mt. McKinley/Denali) was out--something that rarely happens, maybe once or twice a season. The alpine glow was like something out of National Geographic. We pulled up to a gas station--the only one for 100 miles in either direction--and he had one of my favorite country songs playing in his van ("...there might be a little dust on the bottle...") All I said to him when I got out was your stock just went up. He said, so did yours, and I asked why and he said he'd never seen a girl pull a camping trailer that fast before... so that was the start of it. "We decided we'd give it a shot so we asked Backroads to place us together. They sent us both to New Zealand and the rest is history. We got engaged on a mountain on the South Island of New Zealand above Lake Wanaka with a perfect panoramic view of Mt. Aspiring peak. After a snack on the top (a Backroads baggie of peanuts and M&Ms), we started to head down the hill but Kevin stopped me and said he had to get a rock out of his shoe--then he pulled out my engagement ring and was already down on his knee to propose! 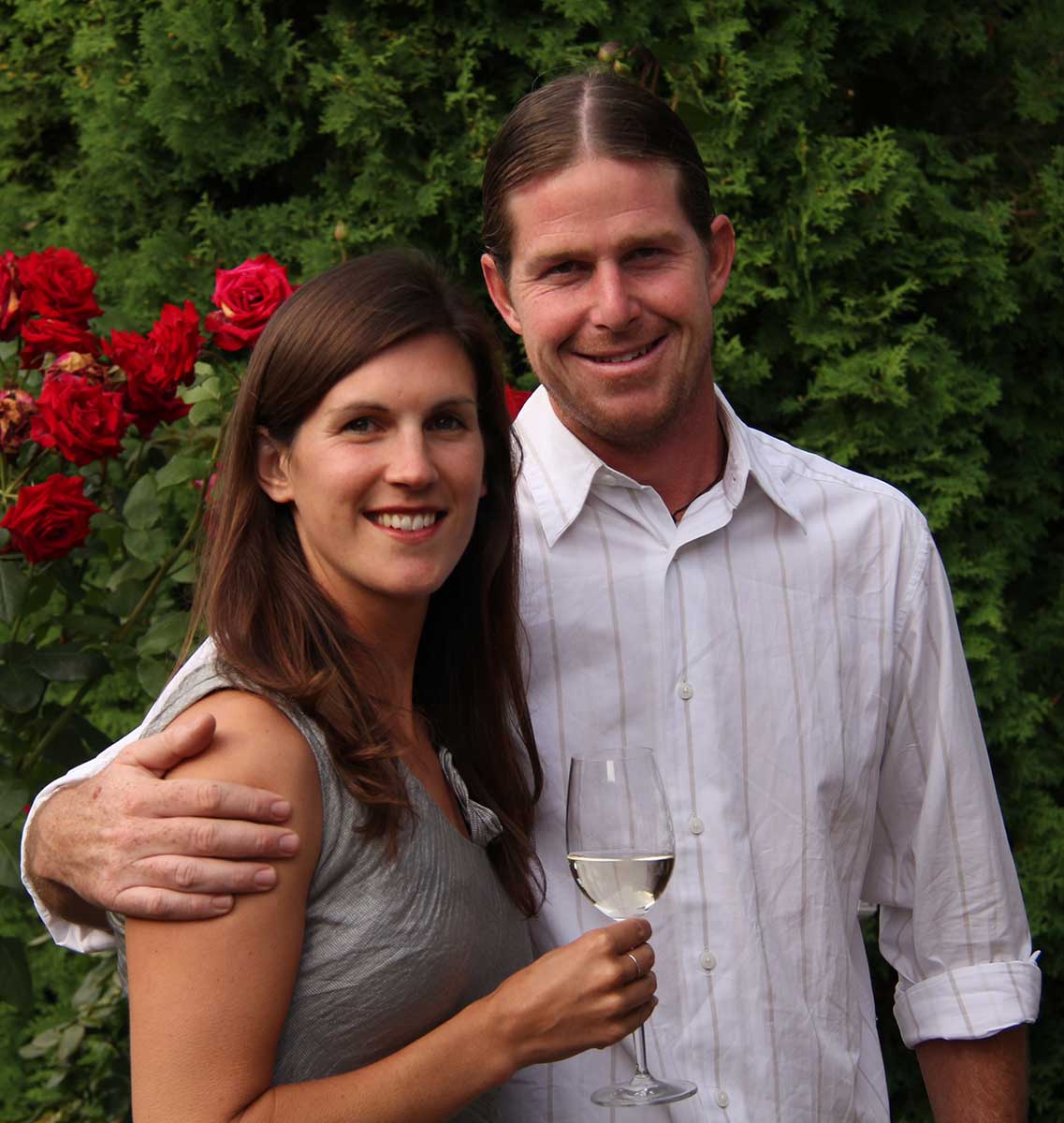 "Since then we've lead all over together--France, Turkey, New Zealand, Vietnam. We got married on August 24, 2013, in Asheville, North Carolina, and are still doing the Backroads thing year-round. He's my best co-leader, best friend and now my family!" So why do Backroads leaders fall in love? It could be that racking 26 bikes in the pouring rain creates a bond that will last a lifetime. Or that only other trip leaders would understand the wonky schedule that has them in and out of hotels across the world. Or they simply get caught up in the romance of it all and can't help but to fall in love in the beautiful places Backroads visits. Whatever the reason, it happens. And we love that it does!

From Tom Hale: How We're Preparing for a New Year of Travel
A Message From Tom Hale: If you’ve met me, you know I’m not one for staying at home. Whether I’m in the office, on the trails around my house or exploring the world with Backroads, I love being on the move. And…
Bike Travel in Italy - Taking it Slow
The first time I traveled Italy was by bike. It was 2015 and I was there for the party on two wheels that is a Backroads Staff Ride. For those unfamiliar, Staff Ride is an opportunity for company employees to gather and cycle together, typically somewhere that Backroads leads trips, as a way to…
5 Reasons to Travel to the Southwest
The Southwest is a playground for outdoor adventurers, with its dramatic rock formations like spires, arches and hoodoos mirroring the architecture of childhood joy. But it’s not all fun…
Red or Green? The Spicy Story of New Mexico's Chile Cuisine
Any visitor to New Mexico needs to prepare themselves to answer one very important question: red or green? This question is so ubiquitous, in fact, that in 1996 the New Mexico legislature elected to make it the official state question. Regardless of whether or not you were even aware that there…

Love this article! I met my husband in 1988 on a Backroads trip and we have been happily married for 24 years! We hope to take another trip one day to celebrate our amazing story. You just never know where your path in life will lead.
Best Regards,
Jennifer Newcombe
Great to hear Jennifer! What trip did you meet on? I agree, it's amazing the turns in life that we're presented with and where they can take us!
Such cute couples! I can't think of a better way to bond than over exotic travels.
Thanks Richard, I would agree!
Nearly sixty co-leader couples?! Talk about real co-leader love!
No kidding! That's taking it to another level!
Hi, Melissa. These stories made my day! Thanks for sharing.
Great post! I got hired in 1990 and married my training leader (hired in 1989), David MacKay. It was pretty much love at first, as we helped get the units out of the San Leandro warehouse at the beginning of the season...then drove all night to Vegas to start two back-to-back Canyons trips. We're known to be the co-founders of the 'leader breeder' program. Our two daughters are now 21 and 23 and we are still happily married and run our own birdwatching tour company and live in Mexico. Life has been a total adventure and some of our best lifelong friends are BR people.