The End of the World

Ukulele chords strummed, vibrant plumerias bloomed and hula skirts swished as soon as my feet hit the tarmac.  I was back in Hawaii--one of my favorite places on the planet. But this time, instead of training for a grueling Ironman, or spending time with family and friends, I was in Hawaii as a first-year Backroads Trip Leader, and I'd be sharing this amazing place with our guests and my co-leaders. As I gathered my bags I was so excited I tingled, but I was also nervous.  I had with me everything I would need for the next three months. I flung it all into the big white van waiting for me at the airport curb. "Allloooohaaaa!" my co-leader/driver called as I hoisted my travel-weary bones into the passenger seat and closed the door. My co-leaders were an experienced crew whose names I'd heard but faces I didn't know yet. Tales of recent adventures rolled between us as our van climbed out onto the lava-lined highway under the light of the early evening sun, en route to the leader house. Even as a new leader, I knew that when meeting new co-leaders for the first time, our bubbly get-to-know you chats should include little tips to help smooth our time together, in work, play and general life. "I'm never late, and I love an everyday adventure, my coffee black, my mornings early, and my trail runs long," I rattled off with a straightforward smile.

"Sounds GREAT!" my Hawaiian shirt clad driver answered. "But the most important fact we need to know," he said, as he pulled his bright blue wayfarer frames down to the bridge of his nose and turned to me, "is whether or not you'll go off the End of the World with us?"

"But, of COURSE!" I answered triumphantly, thinking, of course, that he was asking whether or not I was willing to go the distance to make our upcoming trips amazing. "PERFECT." He replied. "Then! We have an extra stop to make! You have your bathing suit on?" Well, no, I did not have my bathing suit on. And I didn't actually know what he meant by an extra stop. Gulp. I'm not sure if my mini-wave of panic was visible but I certainly felt my cheeks flush as I realized that--if there was a place where the End of the World purportedly existed--the island of Hawaii would be a strong candidate. A pang of unease pulsed through my arms and legs as I scrambled into the back seat and started searching for my bathing suit. I found it, and managed to wriggle into it--all the while keeping an eye on the road and trying to guess where we were going as we proceeded off the main highway, down a palm lined avenue, onto a dirt road, and into an area of the island I had never visited before . The van's lively music and the roar of the engine fell to silence as the key turned off in the ignition, leaving our ears filled only with the sounds of rolling, crashing waves against the rocks below. Opening the door I stepped out onto the lava field so as to get closer to the sky cast in shades of purple, pink, blue and orange. 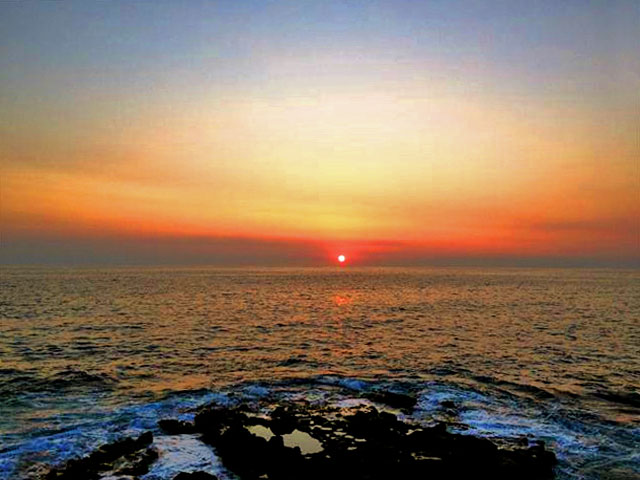 "When the surf swells are in, these cliffs turn from black to white, with dark lava being covered by white ocean spray," he said. "Then, we can see the blowholes below created by years of pounding surf." The surf crashing into those same blowholes was creating the spray I was feeling against my cheeks now as we stood contemplating the drop to the sea. "Are you ready to go in?" he asked me. I didn't answer. He just smiled, surely seeing the twinkle of disbelief in my eye as I realized that I was about to end my day of travel by leaping off a 15-foot cliff into a tropical sea. And that this test of trust and adrenaline was our first memory as friends and co-workers. "I'll go first," he said and in the same moment he pushed the cliff away with his feet and leapt into the ocean with a splash that was nearly drowned out by the sound of waves as they swallowed him up. Just a few moments passed before he bobbed to the surface of the cerulean deep, let out a triumphant "WAHOOO!!!" pumped his fist in the air, and turned to look up at me, beaming. I moved my gaze from the nest of bubbles cradling him below in the rolling ocean to the golden sun, preparing to set over a navy blue horizon thousands of miles away. I thought of all the distance I had traveled that day--from the mainland to the middle of the Pacific--and how this beautiful island and I had a long way to go in our discovery of one another in the months to come. In that moment, the distance between that tropical splash and I--that official welcome to the island--didn't seem so far. I leapt before I could let out a yelp and my feet hit the water, warmer than the air. My weightless body fell, and then floated in a column of bubbles for a brief moment before I bobbed up, the call of "WAHOO!!!" meeting my ears as soon as they broke the surface of the water. His eyes and giant smile met mine as we floated along happily cradled by the ocean, and we silently agreed, it was going to be one amazing summer. As we bobbed, I wondered who else I'd meet on this path--guests, leaders, and locals alike.

Lentine, I had so much fun reading this!! It is very well written, and what a great adventure! Have you done Jump Rock on Phelps Lake in Yellowstone yet? Put it on your list ;)
Top