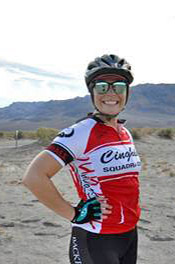 How long were you part of the Camp Crew?
I spend 2 seasons as Camp Crew. My first season was in Southern Utah and Glacier National Park and my second was in Yellowstone and the Tetons

What were the highlights of the Camp Crew position?
Having time off during the days to explore more of the Nationals Parks (hikes and bike rides)—I think I got to see more than most leaders who were working in the region. Working with incredible co-workers. Learning how to cook in dutch ovens and then showing off those skills while on trip—especially the coffee cake, focaccia bread, and lasagna. Sleeping out under the stars in the Canyons, jumping in glacier-fed lakes in Montana, and watching the sunset behind the Tetons

What was the hardest part of the Camp Crew Position?
The early morning and the occasional rain storm. That always makes for an adventure when you're trying to camp with a group of strangers!

What skills did you gain during your time as Camp Crew?
Lots of hard skills—pitching tents, cooking meals for 30 people, hitching trailers, driving van + trailer, teamwork, communication and problem solving.

You became a leader in 2010. How did working on Camp Crew help you become a better leader?
It was a great entrée to guest interaction and teamwork. I felt much more confident as a leader after 2 years of Camp Crew under my belt

What roles do you hold at Backroads now?
I literally have held almost every role there is! I started as a Camp Crew (thankfully), became a Trip Leader for 2 years, and in 2013 I moved to the office and now I work as the Yield Manager at the Berkeley HQ. I'm so lucky to have had so many experiences in the company!