Why Now is the Time to Go to Nepal

For as long as I can remember, I have been fascinated by the mountains and those who make a home there. This fascination is often accompanied by an overwhelming feeling of enchantment that feeds in me a persistent and pressing need to hike closer to the clouds than before... to find a place where I can discover new and magnificent landscapes that may challenge my normal perspective. Combine that with a yearning to experience a new place with a vibrant culture and a rich history, an authentic location that could really open my mind and challenge my assumptions. For me, it was time to go to Nepal.

My own path toward this place people call 'The Roof of the World,' emerged while I was contemplating the well-worn tourist trails that lead to Everest Base Camp but then opted to focus my attention on the unique Annapurna region instead. And as the plane touched down in Kathmandu, I instantly became wide-eyed at the views and for what possible adventures may await me in this new place. What I found was that every day in Nepal brought me closer and closer to understanding a beautiful lesson... this place is so much more than just climbing the mountains. 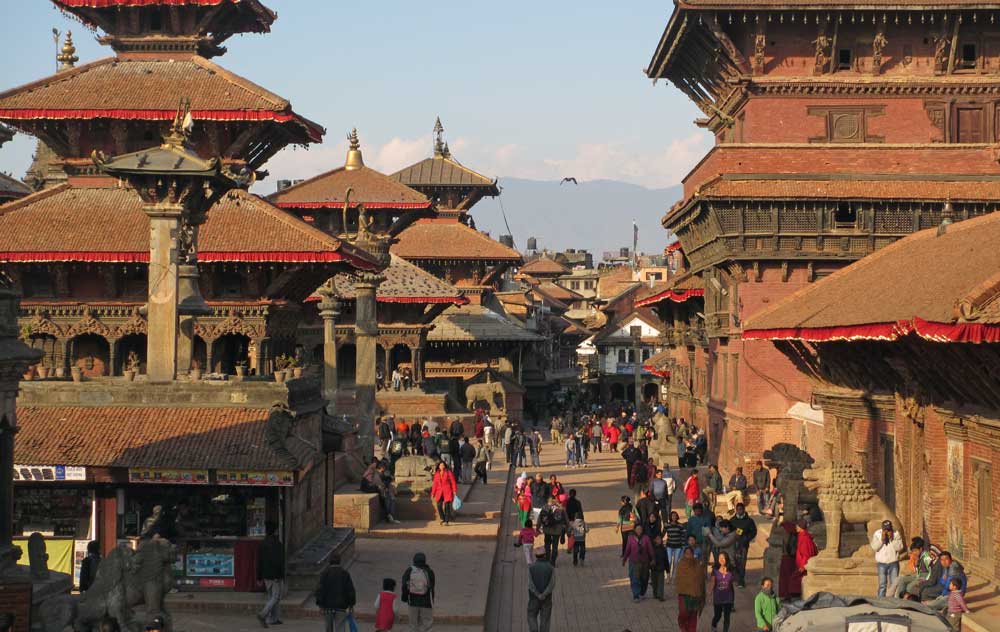 Spending time in Kathmandu was a sensory overload that I welcomed with open arms. Joined by my partner, we set off to discover the city by venturing past bustling stores and markets selling all the freshest foods from the local farms and everything else a trekker could want. I marveled at how so many different lives were intertwined in this wonderful maze of architecture, temples and shrines. It was the perfect place for us to take care of shopping for some staple items we'd need (like new books, new socks and eating plenty of carbs) as we prepared for our journey into the Annapurna Conservation Area. 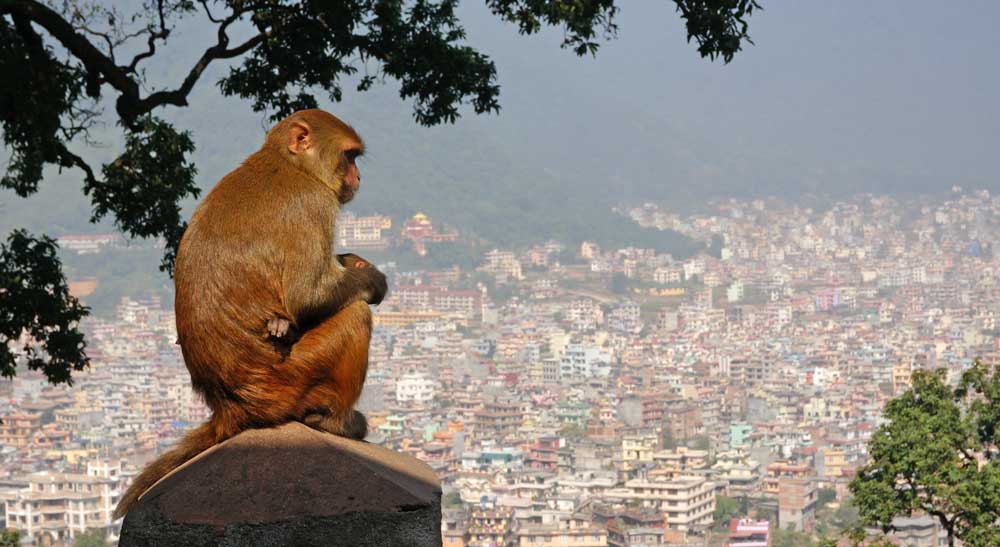 North of Pokhara, Nepal's second largest city, awaits one of the world's classic long-distance hiking trails...The Annapurna Circuit. Immediately upon our arrival, we noticed that the hustle of city life was replaced by tranquil trails that meandered through valleys of alpine farmland. Bright sunlight was our guide as we moved through terraced fields and verdant forests. When school children passed us, their giggles added to the sweet sound of gentle nearby streams and followed them into the distance as they skipped away. Farmers, in the middle of tilling their fields, stopped to give us friendly waves as we sought out welcome refreshment at trailside teahouses. 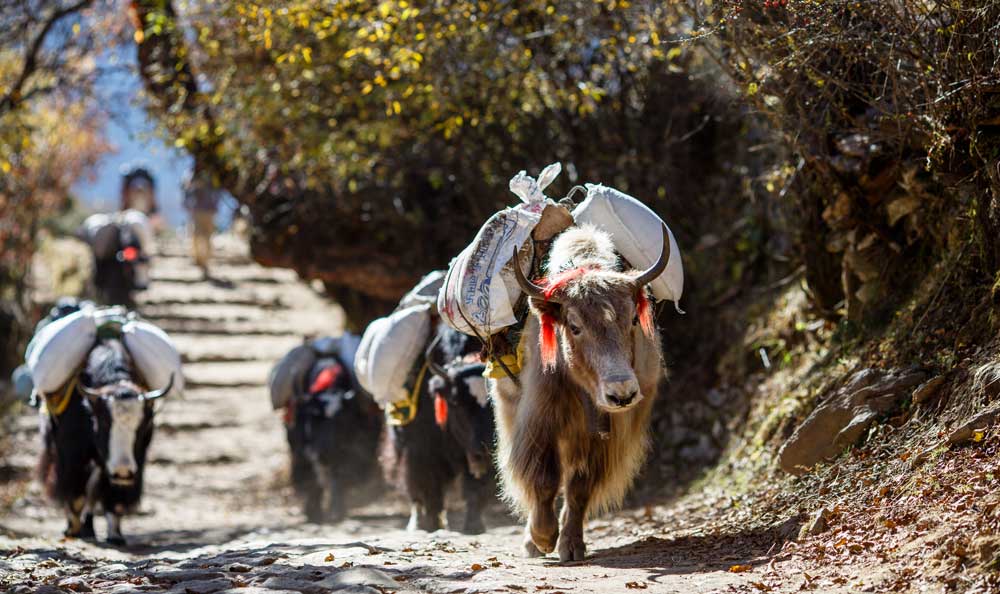 As our trip progressed, I found myself continually surprised at just how sweet and kind the Nepalese people are, particularly to strangers like us. Not even 500 meters into our trek, three separate locals took the time to point us toward the right path. One young man was so kind that he asked his cousin to keep an eye out for us on the trail, in the case that we needed anything when we would pass through his village a few hours later. Incredible! Such a heartwarming beginning. 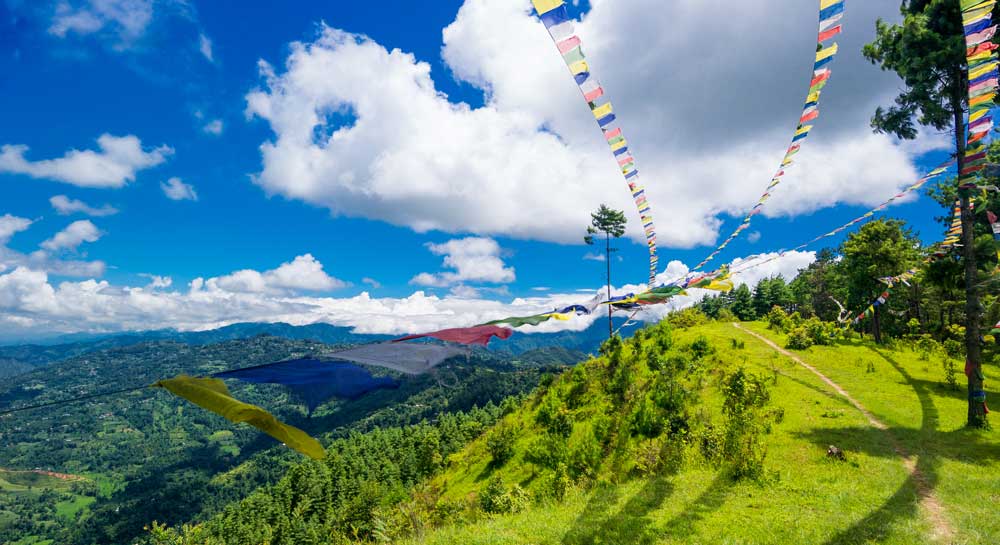 To me, Nepal is unlike other mountainous regions of the world that I have visited. Here, new shades of an intensely blue sky emerged behind the looming mountains. Impressive shades of green seemed to pop out of the landscape to draw our attention to the flourishing fauna. And then there was the omnipresent and extraordinary friendliness of the local people. Even more noticeable to me, was the feeling that Nepal is a corner of the world that that is still genuine. In today's busy world it seems increasingly more difficult to find places that haven't been significantly altered to meet the expectations and desires of tourists and visitors. But here in Nepal, it still felt real. In Nepal you are away from it all. There are no tourist information centers. You won't find directional signposts at every turn. And long gone are the familiar sights and sounds of your own normal life. It never ceases to amaze me at how time seems to move more slowly if you take away your daily routines and regularities.

With a growing influx of more direct tourism, some areas of Nepal have become quite developed. Jeep tracks cut deeper and deeper into the country roads, allowing larger and larger vehicles to transport more and more tourists who seem to trek less and less. Even in Annapurna, indicators point to a proliferation of tourism on the horizon. But luckily, the remoteness of this region has meant that tourism is growing at a slower pace than within some other regions of Nepal. Still, many visitors we spoke to along the way mentioned to us, "a few years ago, things were a lot different... far less traveled." My partner and were grateful that we'd decided to visit Nepal sooner rather than later. And this particular region of the country still holds an intrinsic beauty that is reserved only for those who travel by foot. 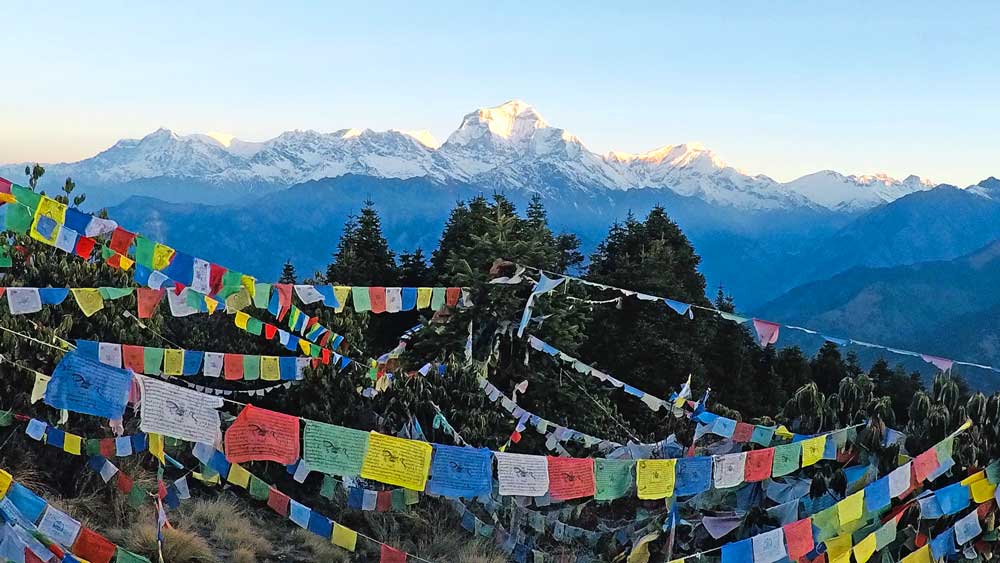 As our feet carried us further along the Annapurna Circuit, the trekking became steeper and steeper which made every meal even more welcome than the last. One morning, as we passed through a tiny village decorated with colorful prayer flags, a feeling of reverential respect combined with overwhelming wonder washed over each of us. The Annapurna Massif came into view. Those grandiose snow-capped peaks, jagged with glaciers, caused us to feel tiny and humbled. Ultimately the things I saw during my trek in Nepal have been burned into that special part of my memory that I use to keep things that I never want to forget. One thing is for sure--mother nature has a particular talent for creating situations where you are forced to put your own life problems into a new perspective. And we found ourselves very grateful for that. 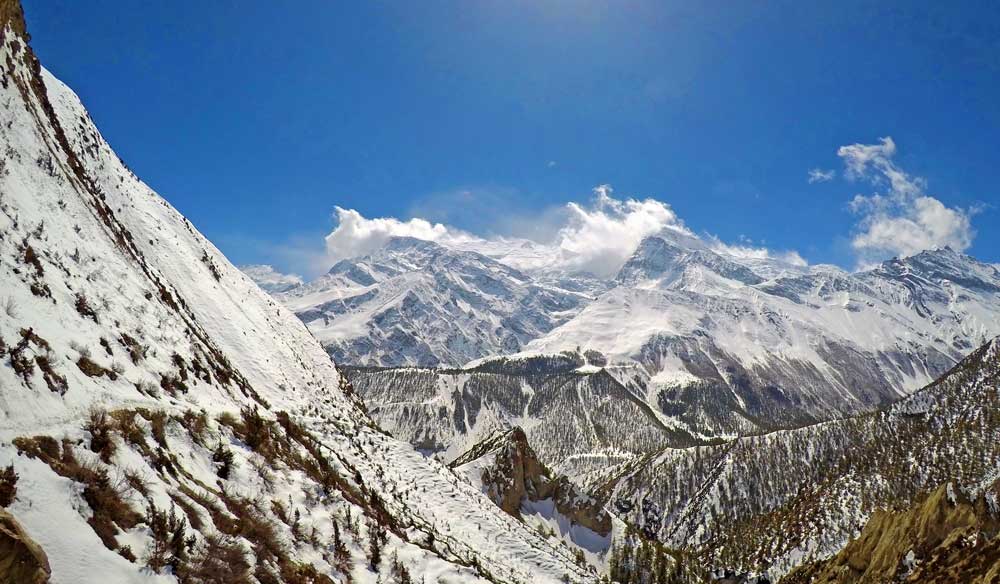 As our trek continued, it became clear to us that we could have happily remained in that wonderful space forever. Every deep breath, every step had been worth it. When some of my friends back home balk at the idea of venturing into the mountains, shamelessly asking me, "Why bother hiking up there in the first place? You just have to turn around and come back down," I am reminded of what Rene Dumal wrote in his book, Mount Analogue: A Novel of Symbolically Authentic Non-Euclidean Adventures in Mountain Climbing... What is above knows what is below, but what is below does not know what is above. One climbs, one sees. One descends, one sees no longer, but one has seen.

As we neared the final village of our Annapurna trek, some friendly puppies rushed out to play with us, causing the neighboring chickens to scatter and a yak to grunt at their sudden burst of energy with disapproval. High in spirits and filled with admiration of the Nepalese people we had met along the way, I relished the puppies happily nipping at my shoelaces. Our journey here was coming to an end and it was time to descend from life in the mountains to life at lower elevations and the lakeside city of Pokhara. 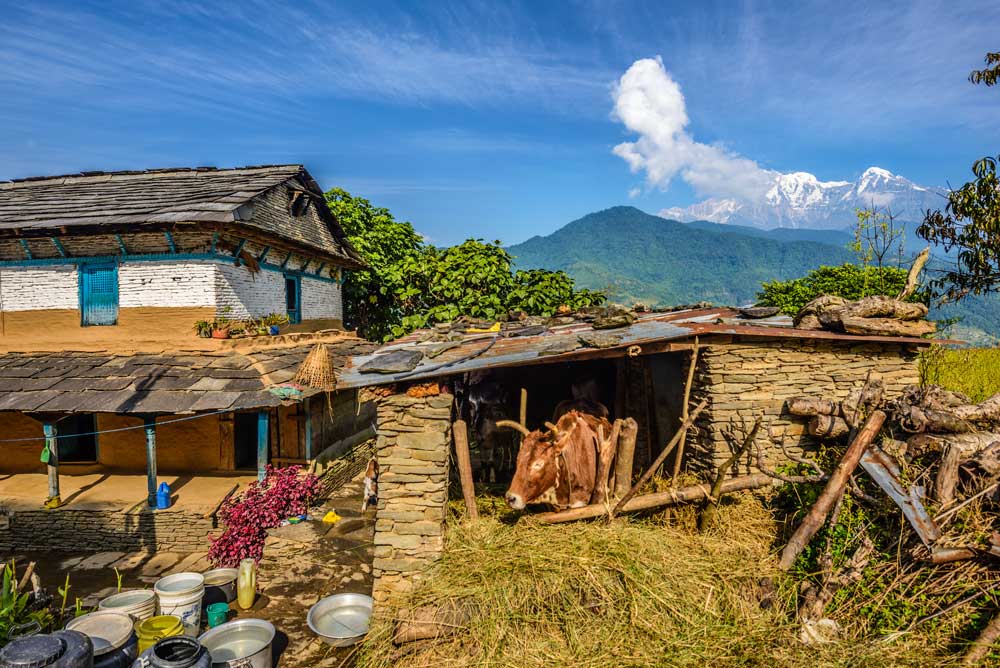 Later, indulging in some well-earned relaxation, my partner and I toasted our fantastic trek with some cold beer. Then the bartender mentioned a nearby national park that tourists often miss. Established in 1973 and a World Heritage site since 1984, Chitwan National Park is a sanctuary for flora, fauna and wildlife. Over 700 species of animals live here including crocodiles, rhinos, the famous Bengal tiger and more birds and butterflies than you would ever believe. Before we finished our drinks, we were already planning a way to get ourselves there. And we reveled in the kindness of the Nepalese people, the unbelievable natural landscapes, the hearty food and spectacular wildlife. 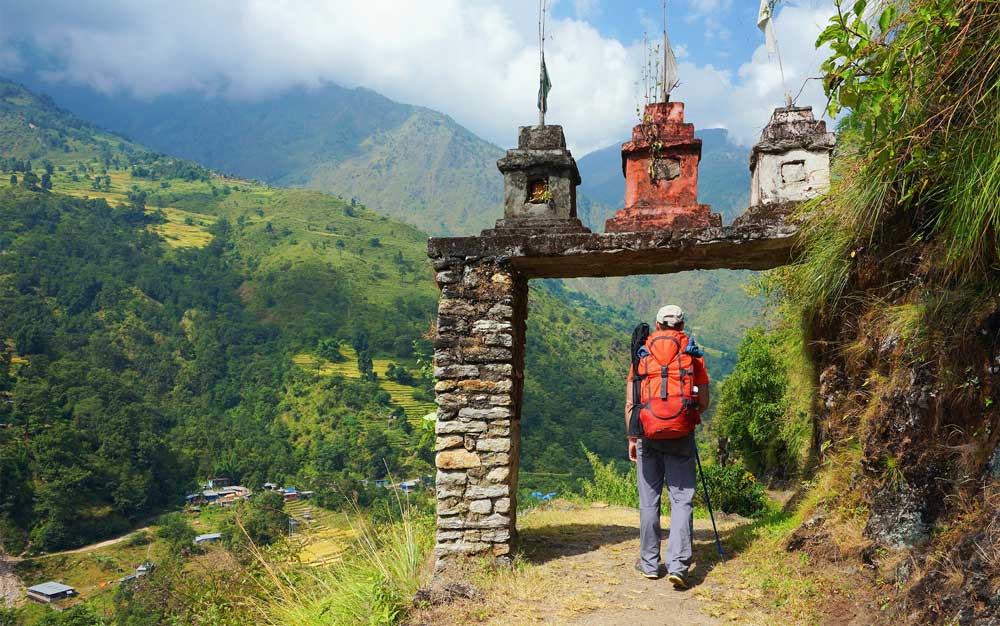 At that moment, a part of each of us knew that in a few years, if we were lucky enough to return to Nepal, we might find ourselves reminiscing about how much things had changed since the last time we were here. Would that happen to us? Maybe. But in that moment, surrounded by the wonders of Nepal, we knew the best time to be here was right now.

I visited the Everest Base Camp area in 1978 and feel in love with the people...through my climber friends I have heard that the Base Cap is now basically a zoo with sooooo many people there. I would love to see the Annapurna area....thanks for sharing.
Hey Diane. That must have been truly incredible to experience Nepal during that time. Annapurna is waiting for your next adventure there! Thanks for reading!
Hi Chris, Thanks so much for your informative write up. We hope to do the Nepal Trekking & Safari trip with Backroads in the future. We have a couple more questions ...
1. Is there any specific high altitude training prep that must be done before this trip, i.e did you take Diamox?
2. Given the high expenditure of calories for the hikes, what will the meals be like?
3. Are there hiking options within the itinerary in case the high altitude hiking proves to be
"too much"?

Thanks!
Hi Lindsey! Thanks so much for your questions. That's so exciting you're keen to visit.
1. Diamox is great. I use it regularly in Nepal when broaching 3000 meters. General cardio fitness is recommended. There's lots of easy ways to manage the altitude when you're here.
2. Meals are rustic, filling and delicious. Plentiful too, to give you extra energy for all the hiking.
You may be surprised by how wonderful they are given the remoteness. Just don't expect any Michelin stars in the mountains.
3. There's generally lots of trails in every area we're visiting, so there can be a more relaxed hiking option on most days.

Hope all this info helps and see you soon in the Himalayas!
Top