The Makings of a Great Swiss Hike

To say that the Swiss like to hike is like saying they eat the occasional chocolate bar--an understatement. In a country that's twice the size of New Jersey, there are 37,000 miles of hiking trails and 95 percent of the people who use them are Swiss. 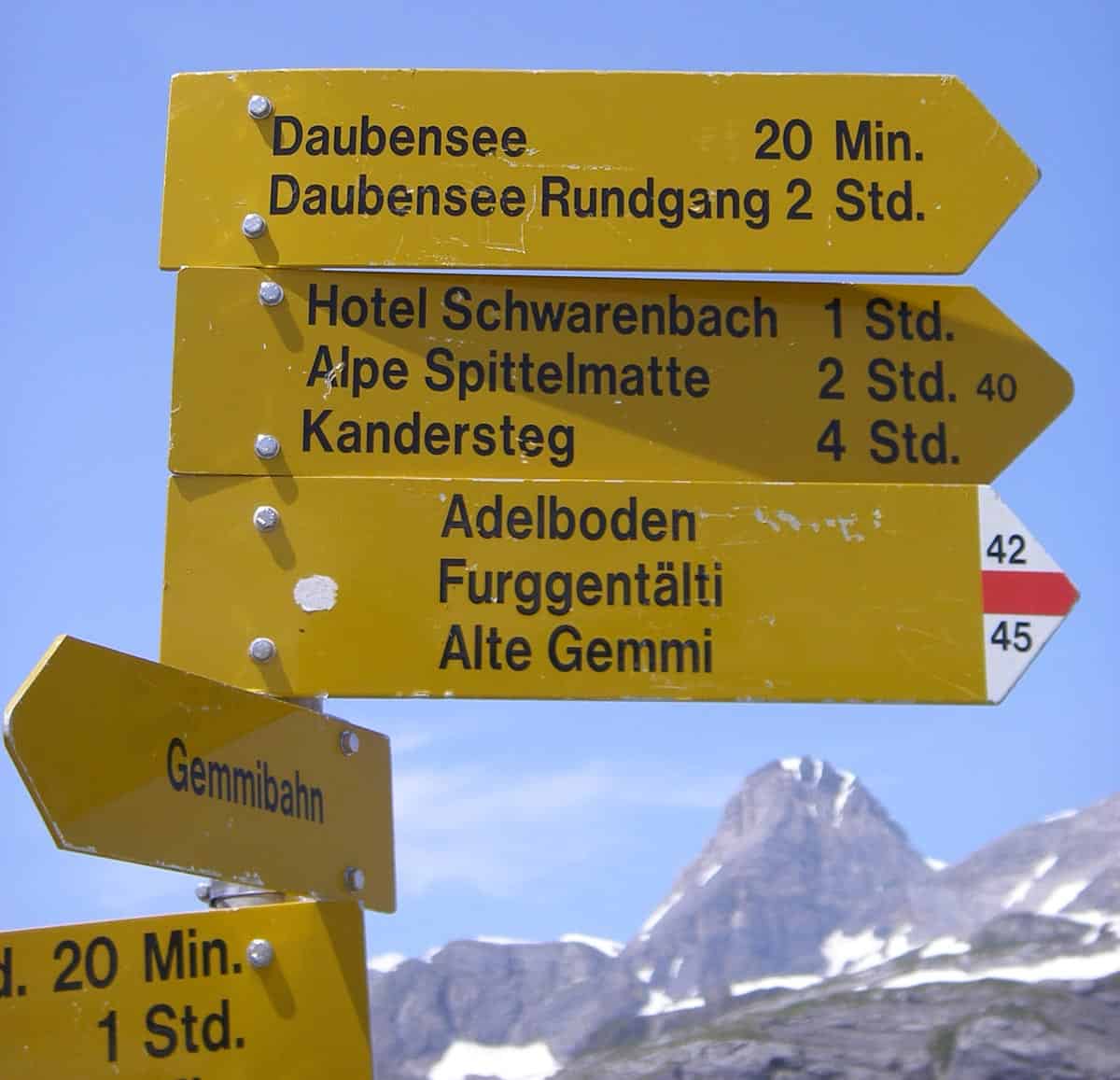 In true Swiss style, there's a national law that requires all village, mountain and high-altitude paths to be neatly signposted. The Federal Act on Footpaths and Hiking Trails requires each canton to plan, maintain and mark all the trails in the region. Rather than list the distance in kilometers, the signs give the amount of time the route takes. Headed to the top of the pass? That will take 2 hours and 20 minutes. Headed down from the same spot? Give yourself 1 hour and 45 minutes to get to your post-hike beer. In remote alpine meadows and cities alike you'll find signs telling you it's 2 hours or 2 minutes to the train station. It's all very logical, very orderly and very Swiss. The Swiss sense of organization definitely speaks to some part of my psyche, but it's the mountains that speak to my soul--there's nothing quite like hiking in the Swiss Alps. Over the years, I've thought about what makes hiking in Switzerland unique and I've come to the conclusion that it's not merely the perfect signage. Here are a few of the elements that make the land of cheese and chocolate an exceptional place to hike: 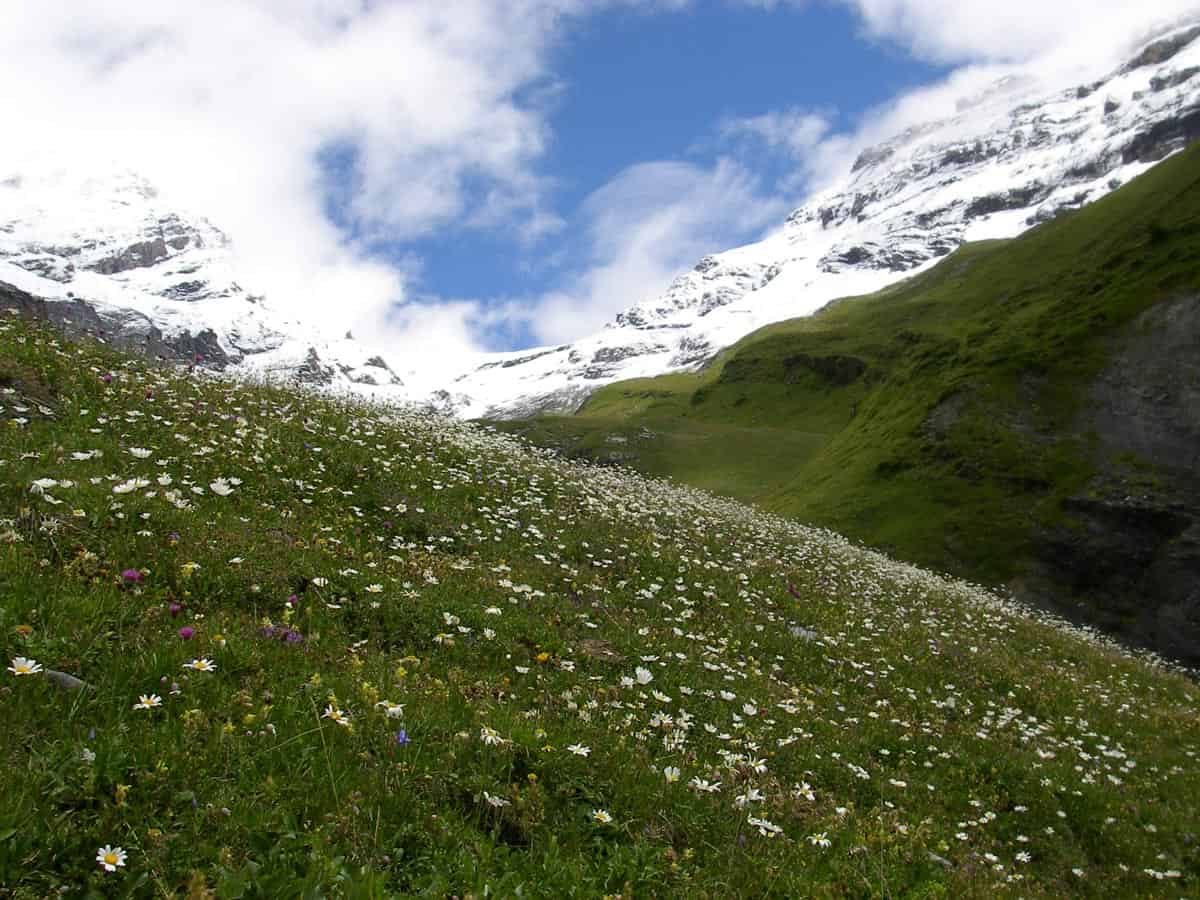 1. Cows: Although livestock isn't something you typically see on a mountain hike, dairy cows are a common sight in Switzerland. They're brought up to the alpine pastures in the summer because, in a country that's 70 percent mountains, there's little arable land and low-lying fields are needed to make hay for the winter. And yes, they really do all wear bells. The sound adds to the ambiance, but has a practical aspect as well: if the cows need to be milked at 5:30 a.m. and it's dark or foggy out, the sound of cow bells will lead you straight to the herd. 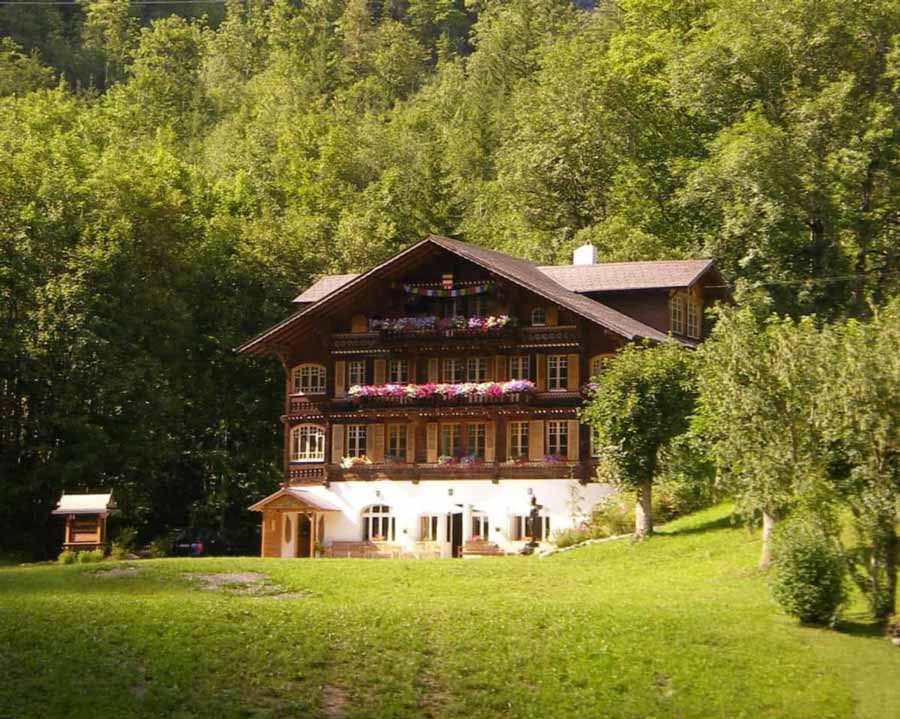 2. Chalets: Chalets are so very Swiss and every good hike involves at least one or two. These old half-timbered buildings have the obligatory window boxes with geraniums and, if the building is part of a working dairy, a line of giant cowbells under the eaves. The date the chalet was built is carved into the façade and, for wooden buildings, they can be astoundingly old. In Kandersteg, visited on our Switzerland trips, the oldest building still in use dates back to 1557. 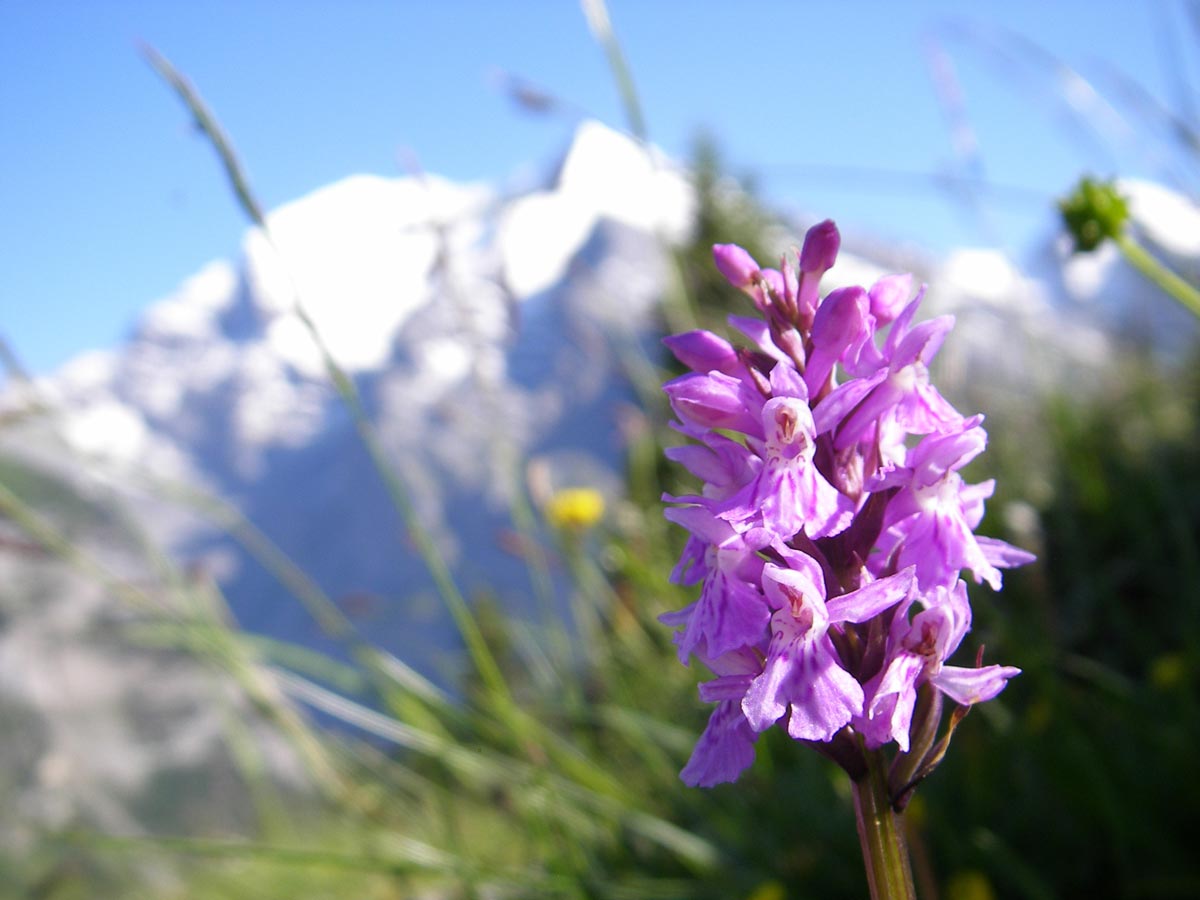 3. Wildflowers: In my book, Switzerland won the wildflower lottery. They cover hillsides, blanket meadows and tuck themselves in the nooks and crannies of rocks. On our family trips, I tell the kids that gnomes come out at night to tend the flowers--the meadows usually look so manicured that the idea of gardening gnomes doesn't seem so far-fetched! 4. Public Transportation: Need a boost up the hill? Tired of walking? It's started to rain? Trains, buses, boats, cable cars, funiculars and gondolas are all perfectly acceptable additions to a day of hiking in the Swiss mountains. And why not? There's little car traffic and it allows just about anyone to get outside. I've seen an entire retirement home on a mountain pass and people with crutches on a trail at 7,000 feet. It may not be wilderness as we know it, but it's very civilized. 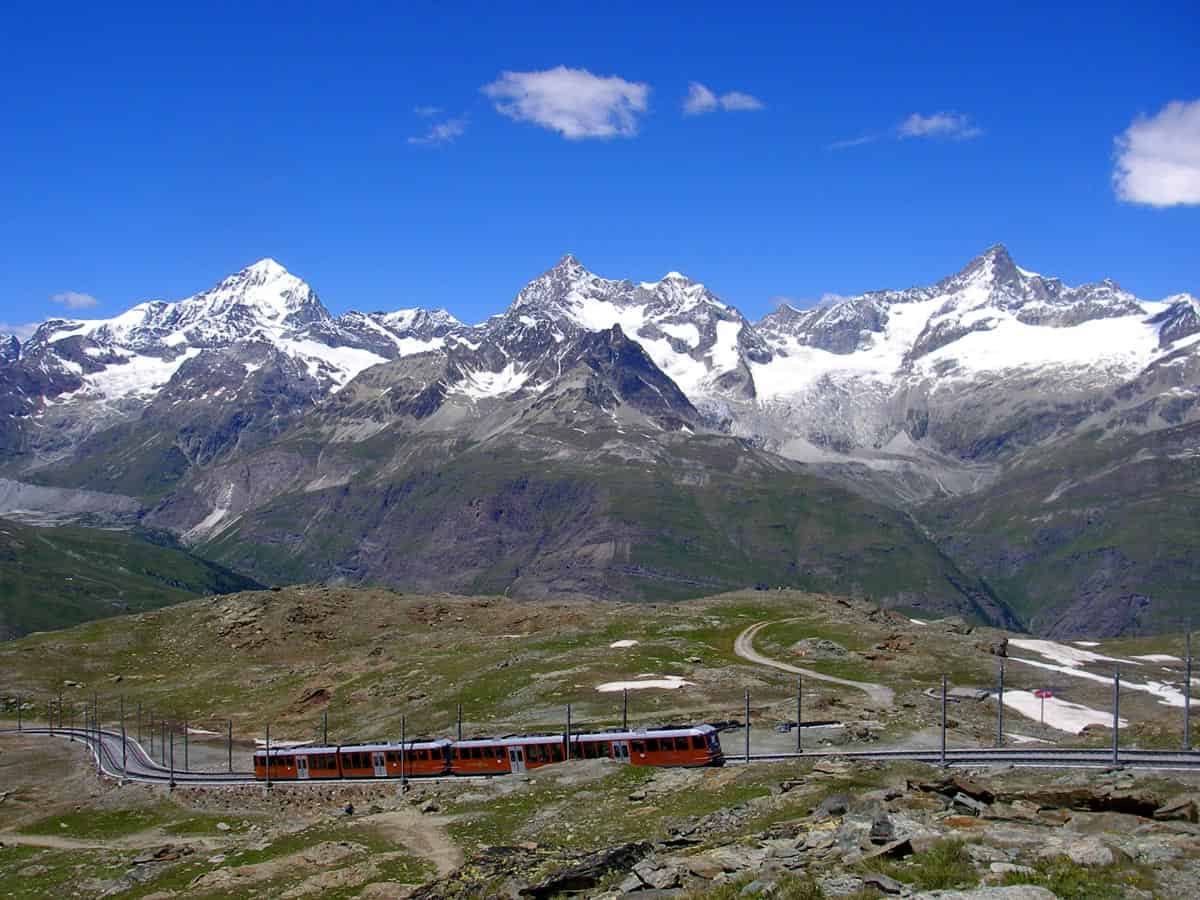 5. Scenery: The postcards don't lie. Switzerland is stunning. Craggy peaks, hanging glaciers, snow-covered mountains, waterfalls and turquoise alpine lakes seem to be around every bend. If it were the US, the entire country would practically merit national park status. Instead, in Switzerland the mountains constitute an amazing network of public open space. Land in the valleys is privately owned, but almost everywhere else is held by the local government and open to the public. The farmers have grazing rights, the hikers have unlimited access, and when it snows, the Swiss go out and enjoy the mountains on their skis.

Kelly... I love your postings! Please keep me on your list!
Thanks Phoebe! I'll let you know when my next story is posted. Glad you liked it!
Could you tell me where you got the above image of road signs in Switzerland (off the web? your own photo?). I'd like to ask permission for the use of a small version in my forthcoming book ALPINE APPRENTICE.

Sarah
We will be in Switzerland August 3rd -Aug 6th We really wanted to do a family hike. Any recommendations for this short visit? We have to take train in an out.
Four seniors thinking about a hiking trip in Switzerland probably this summer. We would like to include Mt Blanc. Do you offer hikes that allow for options of vary levels.
Thanks,
Judy
Top