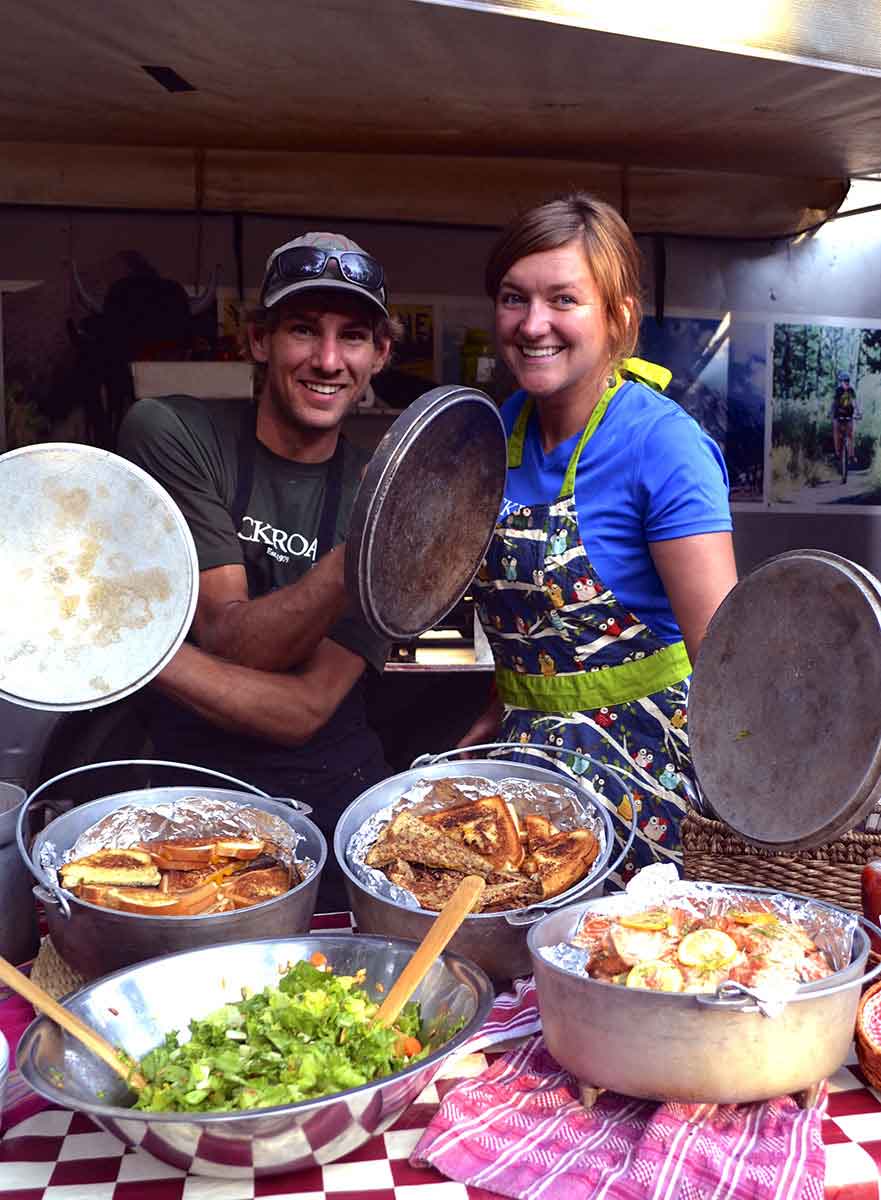 Come and get it!

I could see the distant glimmer of the hot coals pulsing red under the Dutch oven, stained black from ash. Apple cobbler was bubbling through the seams of the cast iron pot and its sweet smell lingered in the air, taunting hungry bystanders. I admired the flavor of the familiar atmosphere and the smiling faces reflecting in the glow of the fire--a perfect setting in the outdoors. I, too, was reminiscing idly in its warmth, as I devoured every morsel of the warm dessert from my bowl. Some of my fondest memories from my first summer season with Backroads came to mind as I ate--memories of treating wonderful guests to some incredible outdoor experiences. As Camp Chef, with the help of my Camp Assistant and a good ole Dutch oven, I did just that--delivered incredible outdoor experiences. You probably don't like eating charred hot dogs or protein bars for dinner, but if you camp a lot, perhaps you've found yourself doing just this.

One of the many highlights of a camping trip (especially if you're an active camper) is the guilt-free feasts celebrating successful days of outdoor activities.

If you don't camp at all, then perhaps good food served under the stars could entice you to start sleeping outside. Regardless, no camp chef should ever disappoint hungry campers with mediocre entrées, like PB&J sandwiches and gorp. Snacks should not be served for dinner. Food is important, and that's why your friends and family, like our guests, deserve to be treated with superb meals that will be a highlight of your trip. Eating is an experience in itself and is a time to reflect and enjoy each other's company. The best way to prepare camp cuisine is via the old school Dutch oven--or Dutchies, as we call them at Backroads. Cooking in a Dutchie is a simple method of preparing meals in the outdoors, and is the secret to some of the best meals on Backroads camping trips. Get a Dutchie, learn how to use it, and you'll be on your way to preparing restaurant quality meals in the outdoors. Last June, after being hired by Backroads as a Camp Chef, I was panic-stricken, after being told that I'd be baking focaccia bread and lasagna in the outdoors; this just did not seem possible. I ate fruit leather and Snickers on camping trips. I'd never created a complete dinner for up to 26 guests at a campsite. At training, my co-leaders and I were told we'd better get familiar with Dutch ovens. In fact, I remember a trainer saying, "You can never have enough Dutchies in the trailer," and of course none of us knew what he meant by that at the time. The first thing I wondered was "What in the world is a Dutchie?" 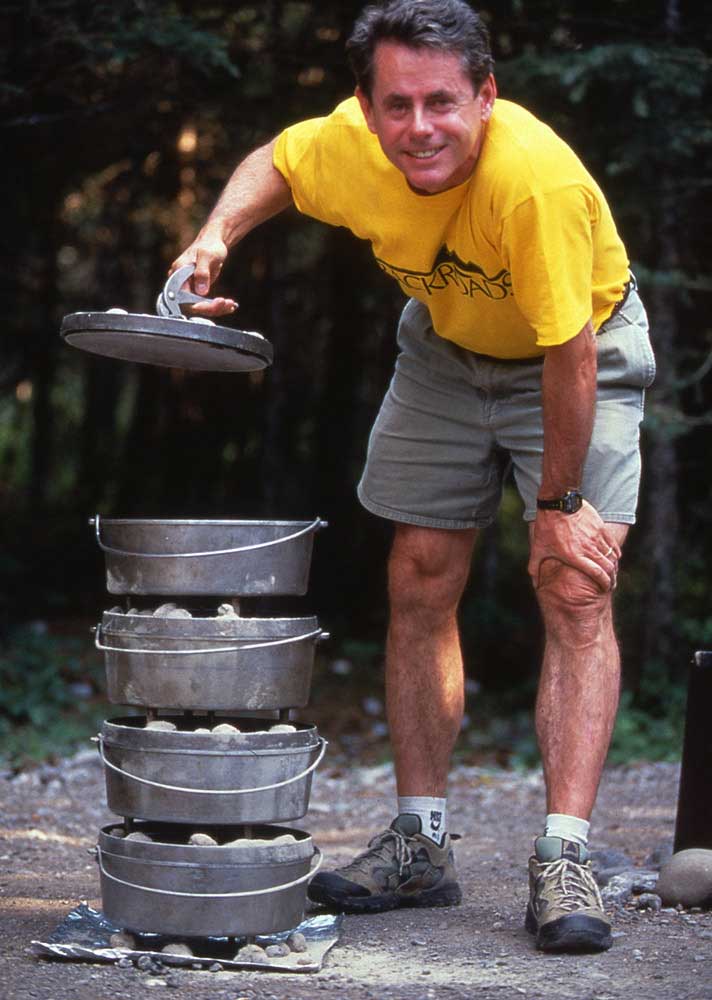 Tom Hale cooking with Dutchies back in the day

My first experience with a Dutchie came a few days later at lunchtime during training. Outside, a Backroads employee was preparing classic American BBQ with every side dish my yearning heart could hope for. We watched as he meticulously stacked 1...2...3...4...5... pots on top of one another, each of which was cooking different dishes at the same time. This feast was an impressive sight to see because it was completely created in the parking lot of our Salt Lake City warehouse, and the food was absolutely delicious. The meat was so tender, the sides so flavorful, and the desserts absolutely mouth-watering. This traditional style of cooking (and a little bit of hands on pre-training) turned my anxiety into excitement. After training I quickly learned the benefits of cooking with Dutchies. After a few trials (and not too many errors!) I realized that a creative camp chef could cook, bake, fry or roast almost anything in a Dutchie because it acts as a small self-contained oven, similar to those found in average American households. A Dutchie acts like a slow cooker with the main ingredient for a delicious meal being patience. Of course I found out that there were still downsides to cooking with Dutchies, which typically came in the form of unfortunate events like spilling a lid of ash onto my food, or having a cake collapse because I opened the wrong lid, having forgotten which Dutchie was the main course. Clean up is also never a blast, so I learned the invaluable nature of lining each Dutchie with foil unless I preferred to spend my night scrubbing pots instead of enjoying time by the fire with guests and co-leaders. Hindrances aside, it wasn't long before the whole new team of camp crew started testing our skills and creativity by making on and off menu items perfectly. On one particular trip in Zion National Park my camp assistant and I surprised one family by secretly baking their daughter a "funfetti" birthday cake in camp. We decorated the cake with a big number twelve and LOTS of icing swirls and multi colored sprinkles. If it weren't for the awful taste in color combinations and my awful handwriting, everyone in camp would have thought we bought the cake at the local bakery in Springdale. In Grand Teton National Park I worked with a camp chef who decided to celebrate the American west by making bison stew and a vegetable shepherds pie. A camp assistant in the Canyons was once caught baking cinnamon buns for breakfast and was highly praised for his creativity in the kitchen by the guests--it was a delicious morning treat! It's certain that the Dutchie is a highly regarded tool in the Backroads arsenal and invaluable when it comes to making delicious meals in camp. If you're someone who enjoys eating comfort food, or enjoys feeling full after a long day of outdoor activity, say good-bye to cooking over the open fire like cavemen and save your sharpened sticks for the S'MORES! Never let your friends serve you beef jerky and unbaked beans for dinner again because feasting on delicious camp cuisine has never been easier or more elegant. The secret to making magical meals in camp comes from an invention that's been around for hundreds of years. The Dutch oven is and continues to be the Backroads camp chef's most valuable companion for cooking some epically delicious meals in one of life's most beautiful settings--the great outdoors!

From Tom Hale: How We're Preparing to Travel in 2020
A Message From Tom Hale: If you’ve met me, you know I’m not one for staying at home. Whether I’m in the office, on the trails around my house or exploring the world with Backroads, I love being on the move. And…
Video: Meet the Backroads Performance Bike
See our new video to learn what makes our Performance Bike the right option for cyclists looking to power up up hills, crush descents and enjoy every turn of the pedals.
Video: Meet the Backroads Touring Bike
Check out our new video below to get reacquainted with a tried-and-true classic, the Backroads titanium Touring Bike.
Video: Meet the new Backroads E-bike!
Check out our new video featuring our completely redesigned, ready-to-roll titanium e-bike, which made its debut this summer! See Backroads Director of Operations Matt Fletcher introduce the Equalizer below.

I think all of us at Backroads (and anyone who has ever taken a Backroads camping trip) can attest to the absolute magic that our talented Camp Chefs and Camp Assistants whip up in the Dutchies back at camp. One of my favorite moments of any camping trip is the unveiling of dinner on the first night to a group of hungry campers. The look of surprise and sheer amazement in everyone's face at the beautiful, delicious feast laid out before them is absolutely priceless.
Austin I agree completely! On absolutely every trip that I was on this summer our guests (and team) were so grateful for the meals that we prepared for them. The unveil was always epic but so were the lunches and snack tables there are equally impressive. I think having great food on trip is a "close to home" comfort that everyone appreciates (guests and crew). These trips are inherently exciting, challenging, and always rewarding! Lets face it, there is no better way to celebrate the end of a good day of adventure than with a full stomach around a campfire!
Now I want to go out and get a Dutchie. The camp chefs at Backroads are amazing.
Richard! I'm telling you right now, you will not regret getting one! You might even feel that your oven is obsolete after cooking in a Dutchie! It's simple, easy, and always a crowd pleaser. Imagine the Super Bowl feast to be had with a few Dutch ovens brewing up some dessert next to the BBQ (I think I'm on to something!). Let us know if you ever get one and what you think! :)
I'm getting hungry just thinking about that!
This brings back SO many fond memories of the summer. I still cook in a dutchie in my oven- lasagna always tastes better that way!
Jenna, you're a camp chef legend! Next year I hope we get to play kitchen again!
I had the opportunity of using a friend's Dutchie this December and ever since I have been shopping around for one. You for sure have it down to a science regarding the distribution of heat and the specific temperature you require. The stacked Dutchies impressed me the most. There is no stopping your creativity and endless possibilities. I made a dish and it came out so well. Needless to say when I took it out if was not long before the Dutchie was all emptied out.

Thank you for this blog. It is very interesting and also convincing me to get one.
I'm sure the answer is yes, but just checking before making my reservation - can you accommodate a vegetarian? That means no chicken, beef, pork, wild game or meat broth.
Hi Bernetta! You're absolutely right, the answer is YES! We usually have a good mix of options that cater to everyone's needs and if we don't, we try to make sure that we do. One of my favorite main courses that we make in camp is veggie lasagne and it's always a hit, along with hearty salads and sides that compliment it all. Just don't tell the kids that our secret ingredient is home made sauce and veggie layers!
[…] on trip and we&#039;re known for elaborate picnics that seem to appear out of nowhere. When it comes to breakfast and dinner on our Deluxe Camping Trips, the same principle […]
Top